Bus drivers have overwhelmingly voted to ballot for strike action over claims of bullying and harassment at work. 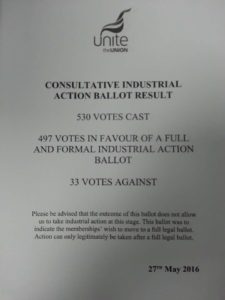 In a consultative ballot held last Thursday, 497 Unite members at Brighton and Hove Buses voted in favour of a full industrial action ballot, with just 33 voting against.

The union is now consider the options and formulating a plan of action. However, talks between the union and management are continuing.

Managing director Martin Harris said: “We met with Unite last week and discussed a number of matters that they raised, and have positively committed to several measures as part of our constructive response to their concerns. We are continuing that dialogue with Unite.”

After Brighton and Hove News reported the consultative ballot last month, drivers commented about poor management practices, including drivers being called while off sick, and being asked in the middle of the night to do early shifts starting in a few hours’ time.

One said: “Having worked for the company for several years, I can truly say that this is the lowest I have ever seen morale.

“Drivers are feeling the pressure from services missing from routes due to no take over drivers or lack of buses. The company’s answer – let’s harass everyone to do more.

“Then when they fall ill from over doing a physical amount of work and go sick, the company’s answer – let’s call them at home and make them feel guilty until they come back to work.”

Brighton and Hove Buses is owned by the same parent company, Go Ahead, which is currently in dispute with the RMT union on behalf of their members working as conductors on Southern services.