Brighton and Hove planners give permission for 29 new council flats

Planning permission has been given to build 29 council flats next to a library, school and health centre in Brighton.

Work on the two blocks, next to the Wellsbourne Health Centre, in Whitehawk Road, should start within months, Brighton and Hove City Council said.

The scheme is part of the council’s New Homes for Neighbourhoods programme aimed at building at least 500 homes on council-owned land.

Those homes will be allocated to people on the housing waiting list. The council has a waiting list of thousands and the scheme is one of several aimed at providing high-quality and much-needed affordable housing.

It was approved by the council’s Planning Committee in a meeting at Portslade Town Hall this week.

The brick-faced design of the two blocks won mixed reviews among councillors. They were told that one of the blocks – the west block – would be three storeys high. It will have 11 flats – eight of them with two bedrooms and three with one bedroom. 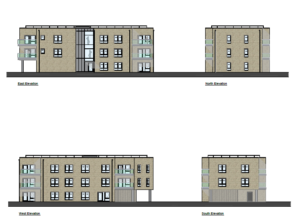 The east block will be up to four storeys high with 18 flats – six one-bedroom flats, five with two bedrooms and seven with three bedrooms.

All the flats will have balconies. There will be 12 parking spaces and 30 cycle racks.

Councillor Julie Cattell, who chairs the Planning Committee, said: “It’s a pleasure to approve this application, part of a new generation of council housing many will welcome.

“These offer a really good standard of accommodation and it’s great to see the council setting an example in making better use of its precious land.”

Building work is expected to start in the autumn and should last for about 18 months, the council said, with at least 20 per cent of the construction workforce drawn from the local area.