A Hove businesswoman has published a healthy baking book with recipes using natural ingredients including alternatives to refined sugar.

Jo Dance also steers clear of gluten and cow’s milk in her book, To the Bakery and Beyond.

The most common form of refined sugar that many of us use is granulated sugar, she said. Recipes do contain natural sugar found in fruit, for example.

She said: “Refined sugar is not in the ancestor’s diet. It is an alien food that damages the liver and suppresses the hormone leptin. This means that a person’s body does not send a message to the brain when it is full.”

When she began her research she thought that she would have to avoid eating sweet foods altogether but she said: “Although sugary foods are best kept to a minimum in our diets, at this point in my life I do like to have some sweet food.

“I was determined to make more informed choices about which kinds of sweeteners I ate so as to minimise the damage done to my body.

“Refined sugar, for example, in traditional chocolate products, draws the minerals out from the body and destroys vitamin B. Refined sugar can also cause obesity because refined sugar spikes the insulin levels which means more energy is stored as fat and it can make people tired.

“You can eat raw chocolate instead. A carefully chosen raw chocolate bar would make a good substitute for anyone who wants to indulge.” 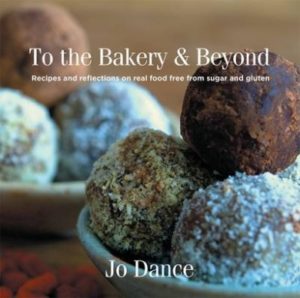 She is mindful that not everything branded healthy is actually good for us. She would love to see clearer food labelling when it comes to sugar and wonders whether an expansion of the existing traffic light system could be used for all foods.

This would be really helpful for many people, she said, especially parents who want to make more educated choices for their children.

She became interested in healthy food when she had her son Oscar. She wanted to know how to bring him up with a gluten-free diet. She found when she was shopping that even in health food shops she couldn’t find what she wanted.

She said: “Healthier foods for kids are often packed full of dates which are high in natural sugar. My book helps you learn how to adapt recipes yourself.

“I’m not trying to pretend that this kind of baking gives you exactly the same results as the more traditional types of sweet foods many of us are used to.

“It can also take your tastes buds a while to adjust to a less sweet taste as well as a slightly different texture.

“My baking may not always be light and fluffy but it is a lot lighter than the sugar-laden manufactured products you would buy in a supermarket.

“A large part of the book is writing to make educated and empowered choices.” 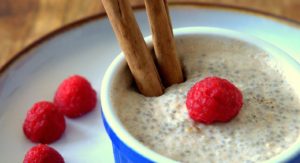 Milk is another red light. She never has cows’ milk. Alternatives she favours are oat, coconut or rice milk.

She said: “The problem with milk is the pasteurisation process which strips the milk of nutrients. Two thirds of people lack the enzyme to digest and break down the lactose in milk. Pasteurisation also removes the good bacteria.”

Another concern is the chemicals which are used when milk is pasteurised. She said: “Cows milk is perfect for cows but not for humans. You can make your own milk from coconut or almonds or brown rice.”

She also advised reading the label before buying nut and grain milks as many that are branded healthy products contain unnecessary additives and sweeteners.

Her idea for the book began after she gave food parcels to her friends and they then asked for the recipes. She began to write down her notes and the science behind her recipe choices but realised the project was bigger – and the book was born.

She said that there was a misconception about gluten-free, adding: “Not everything gluten-free is healthy. It is another bugbear of mine. There is a lot of demand for gluten-free food and people have jumped on the bandwagon.”

She said that people should avoid highly processed foods or anything with long ingredient lists.

A percentage of the profits from her book would be donated to Fareshare Sussex, she said, because she is passionate about food poverty and especially food waste by the food industry and the general public. Fareshare redistributes food from the food industry to homeless and other vulnerable people.

Primarily she hopes that her book will help people to make more informed choices about what they eat.

Recipes are available on her Joy Food Revolution website.

To the Bakery and Beyond by Jo Dance was published in paperback by Silverwood Books (112 pages) on Friday 15 July. It costs £10.99.