A Brighton dog sparked panic when he bounced too enthusiastically on a trampoline and soared over a 7ft fence and disappeared. 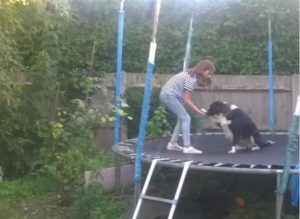 Collie cross Ziggy was playing on the trampoline with children in the garden of his owner’s friends in Canterbury on Sunday when he made his bouncing escape.

But he was soon found safe and sound, although apparently quite puzzled as to how he’d managed to get into the neighbouring garden.

The dog was being looked after by David Sharma while his Brighton in-laws were on holiday.

Mr Sharma, 49, said: “When we put a ladder up and looked into the garden, we saw Ziggy just hanging around by the fence with a bemused look on his face, perhaps wondering how he’d got there.”

Mr Sharma’s 11-year-old daughter Olivia climbed into the garden of the neighbouring house to retrieve him.

Ziggy’s gargantuan bounce came just two days after Bryony Page, 25, won Britain’s first ever medal for the trampoline. Taking silver, she was only beaten to the gold by half a point in Rio on Friday.

David added: “The dog had been watching the Olympics with us at home and so perhaps he simply got inspired to train for the next games at Tokyo in 2020.”