A Brighton care home has been declared safe after an official inspection, having had to deal with an outbreak of e.coli among staff and residents.

In a report published last week, the CQC said that overall Maycroft Manor was good. The home was also rated good for providing services that were safe, effective, caring, responsive and well led.

The inspection took place weeks after Maycroft Manor – part of the Hallmark Care Homes Group – had to tackle an outbreak of e.coli 0157 which affected two residents and a member of staff.

The care home’s bosses halted visits from friends and relatives of the elderly residents after the outbreak in June.

At the time Public Health England said that a national outbreak had affected more than 100 people including 22 in the south east. The source was believed to be unwashed salad.

Symptoms include stomach pain and diarrhoea, with contaminated food or infected animals a common source of infection. 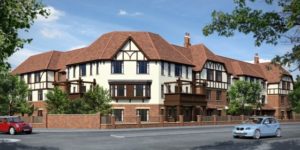 The CQC report said: “We undertook this unannounced focused inspection in light of information of concern we received. The service had been confirmed as having a serious infectious outbreak.

“The service was clean and well maintained, with clear guidance displayed for people and staff in relation to the prevention and control of the serious infectious outbreak.

“People told us they understood that the service had a serious infectious outbreak and that they had been provided with information about this.

“They told us they understood that visiting was restricted and that there may be some temporary changes to the way their care was provided.

“One person told us, ‘They told us all about it (the outbreak). They’ve been wonderful. They have done everything they can to sort it out. It seems like they’ve gone over the top, but they have to”.

“The provider had also ensured that up to date and relevant information updates in relation to the outbreak were prepared and distributed to staff, visitors and people living at the service.

“The provider had actively engaged with and followed guidance and protocols dictated by professional bodies such as Public Health England (PHE), environmental health and the local clinical commissioning group (CCG) in order to contain the outbreak and to obtain samples for screening people, staff and pets at the service.

“The provider had sensitively and appropriately gathered stool samples for screening from everybody living and working at the service. Arrangements had also been made to provide specialist equipment and take isolation precautions for people who had been infected.

“The provider had implemented appropriate refresher training for staff in relation to hand washing and infection control and had also liaised with PHE to provide specific training around the effects of a serious infectious outbreak.

“Effective management procedures had been put in place in light of the outbreak. A team of four managers had been put together to specifically deal with the issues in the service and to liaise with staff and external bodies.

“Staff told us that they felt well supported and listened to during the outbreak and had clear lines of management and communication available to them.

“A member of staff told us, ‘Everything has been handled really well, especially around giving us good information about new guidance. I’ve been able to approach the manager about anything to do with it. It’s really great that we’ve got such a good manager.’

“Changes had been made to the environment of the service and the way it was cleaned and maintained to limit the possibility of cross contamination.

“Staff practices and procedures had been amended in order to limit the risk of infection and changes had been made in the way that waste was disposed of.

“The provider had relevant and up to date policies and procedures in relation to infection control and had updated them in light of this outbreak.

“The provider undertook quality assurance reviews to measure and monitor the standard of infection control in the service and drive improvement.

“The provider was in the process of arranging meetings to establish learning and reflective practice, to put together protocols and tools to assist other services, both in the Hallmark Care group and the local area that may be affected by an outbreak of this nature in the future.”

The report also said: “Maycroft Manor provides care and support to people with personal care and nursing needs, many of whom were living with dementia.

“The home provided care and support for up to 99 people. There were 86 people living at the service on the day of our inspection.

Hallmark Care Homes Group Holdings, the ultimate parent company, made £14.9 million pre-tax profit on turnover of £53.7 million, according to its most recent published accounts. The company is owned by the Goyal family, who are based in Billericay, in Essex.

A spokesman for Maycroft Manor said: “We are pleased that the CQC confirmed that our service was safe following an inspection in July, particularly as this took place at the time of a national outbreak which affected the home but was managed carefully.

“The health and wellbeing of our residents is our number one priority. We are dedicated to delivering the highest quality care for all residents and look forward to continuing to demonstrate these high standards at our next inspection.”