A series of events to mark the 150th anniversary of the opening of the West Pier is to kick off with a special illumination of the remains of the Grand Old Lady this Thursday, with a flight on the i360 for members of the West Pier Trust. 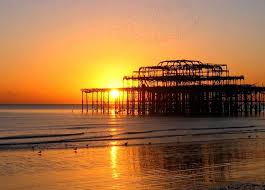 A year-long series of events will kick off next Monday with a celebration of the i360, hosted at the attraction’s Attenborough Room by architects David and Julia Marks.

A special showing of Oh What a Lovely War at the Attenborough Centre on Falmer campus, and a talk about the UK’s coastlines by Nick Crane at the i360 will also take place next month.

Thursday’s celebrations will start at sunset. Trust members will be invited to a drinks reception where a special birthday cake made by Hove Great British Bake Off contestant Kate Henry will be unveiled.