A planned 10p sugar tax on unhealthy drinks appears to have been turned around into a reduction in the price of healthier drinks in what campaigners are describing as a “stunning victory”. 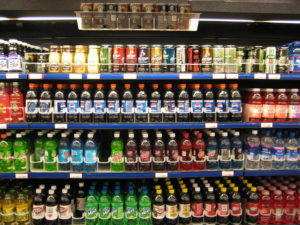 The University of Brighton announced in August it would be introducing a 10p levy on drinks with more than 5g of sugar per 100ml – about 13% – in a move backed by Jamie Oliver.

The move, part of the council-run Sugar Smart City Campaign, soon met with opposition from students, who argued it was a regressive tax, and who launched the Brighton Students Against Sugar Tax Campaign.

This week, a notice appeared on its website that it has decided not to increase the price of sugary drinks but instead to reduce the costs of drinks with less than 5g per 100ml.

By mid-afternoon, that announcement had disappeared – but while the university insisted the levy is still in place, it confirmed the cost of healthier drinks was to drop and would not say if the price of sugary drinks had actually risen.

And a spokesman added that the price difference has already led to a 16% drop in the sale of sugar-laden pop.

Jeremy Gale, Founder of Brighton Students Against Sugar Tax, said: “This is a stunning victory and one that, I must admit, came as a surprise. It is a ‘win-win’ for all students as the university is subsidising healthier alternatives, while those wishing to purchase sugary drinks can now, due to point of sale materials, make an informed choice and pay the same price as they did last year.

“From the outset we said that the policy was ill-conceived. Reducing the price of healthier alternatives rather than increasing the cost of sugary drinks underscores the argument we were making.

“The university clearly has a lot to learn in terms of policy formation as the process did not include a student wide consultation, effectively ignoring the people they were imposing the tax on. I would urge the university to include the student body in their decision making processes when drawing up policies that are either controversial or stand to have a financial impact on its students.”

Peter Engelsen, Secretary of Brighton Students Against Sugar Tax, added: “It’s a relief that the university has finally seen sense and decided to use its own money to encourage healthy living on its campuses instead of taxing its own students. This is a great example of what can happen when students come together to fight against unfair and punitive policy.”

the disappearing statement on the university’s websitesaid: “We decided not to increase the price of our drinks but instead to reduce the cost of drinks that had less than 5g of sugar per 100ml.

“Drinks that we think are better for you are now cheaper than they were last year. Drinks that contain lots of sugar are the same price as last year.”

However, later this afternoon, that statement had been taken down, and replaced with the statistic that there has been a 16% reduction in sugary drink sales.

A university spokesman said: “The statement published by Brighton Students Against Sugar Tax’ contains a number of inaccuracies and the Sugar Smart campaign continues in line with the University of Brighton’s original plan.

“The 10p levy on drinks with high sugar content introduced in August by the University remains in place. We are now increasing the range of healthier drink options on our menu and will be reducing the cost of drinks that contain less than 5 grams of sugar per 100ml, including bottled water.

“We are pleased to report that we have already seen a 16 per cent fall in the sales of sugary drinks since the levy was introduced and a recent customer survey provided evidence of strong support from students.”