Pupils at a Hove secondary school marked the First World War Armistice at 11am on Friday (11 November) with a two-minute silence.

The Last Post was sounded by a number of trumpet players around the school, which is in The Upper Drive, Hove. Each one was accompanied by a cadet in full uniform.

The school said: “Although we remember all victims of war, students were reminded to keep a special place in their hearts for Sean Reeve and Jonathan Bracho-Cooke, two former students who were killed while serving their country in Afghanistan and Iraq respectively.

“The cadets have also been selling poppies during their break time over the last few weeks to raise money for the British Legion.” 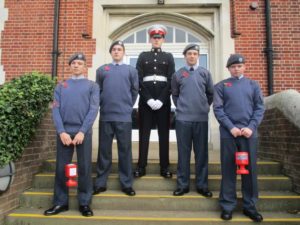 Max Clements, the only Marine Cadet from the school, said: “It was a privilege to be asked to such an important event.”

Lewis Franklin, an Air Cadet, said: “We are all very proud to volunteer for something like this. We will also all be on duty on Sunday. It is important to remember.” 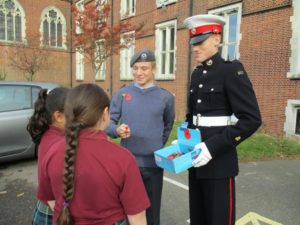 Cardinal Newman students have also marked this month of remembrance with a special Remembrance Book.

Students and staff were invited to record those people special to them who have died so that they can be added to the book which is held in the school chapel for the month of November.

The school said; “A page of the Remembrance Book is turned each day and the book is offered up at each Mass service throughout the month.”