Four guests seriously injured after a balcony at a flat they rented via Airbnb collapsed, sending them plunging two stories into a basement, are taking legal action against the accommodation website after it denied liability. 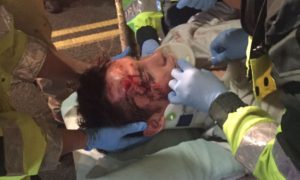 Harry Dee from Brighton, Alexander Browning from London, Jessica Paterson and Claire Corfield were among a group of friends who had rented the flat in Montpelier Road, which was advertised as having a balcony to soak up the sea and sun, in July.

After singing happy birthday to their friend Tom, five were stood on the balcony to toast him with champagne when it suddenly sheared off, sending four of them plummeting down.

They were left with horrific injuries, including a broken back, broken pelvis and arterial bleeding from being impaled on a railing, and have taken months to recover.

East Sussex Fire and Rescue Service subsequently issued a warning, reminding people that these balconies are decorative features and should not be stood on.

But Airbnb has told the group it cannot be held responsible for the accident or their injuries, and has not offered to pay any of their costs so far.

It has suggested the group claim through its host protection insurance, and their lawyer, Jenny Kennedy at Anthony Gold solicitors, has been told by third party insurers that Airbnb’s lawyers are looking at the case.

Ms Kennedy said: “It’s extraordinary that these people can make so much money out of letting properties that may or not have insurance.

“It’s fine for a host to make a bit of extra money from their home, but if you advertise a balcony on which you can soak up the sun, you should have kept the balcony in decent repair and be held to account to that if it collapsed.

“Airbnb say they have reached out to my clients, but if they wanted to really reach out they would be doing so with money and practical help.

“My clients have been in a terribly bad state and they’ve all suffered to a greater or lesser degree.”

“They just dropped. I looked down and it was just dark and rubble. I thought they were all dead.”

His fiancee Jessica Paterson broke her pelvis, leading to the cancellation of their wedding, and has been told she will never give birth naturally. She said: “On the day we were supposed to be going on honeymoon to Costa Rica we had a day out in Portsmouth in a wheelchair.”

Harry Dee, who the Guardian reports fell onto a railing, which impaled through his back and missed his vital organs by an inch, told the Guardian: “They don’t seem to care at all.

“You see Airbnb trying to sell this social-minded [approach], but it’s a load of crap. We have asked them for help. I would have liked my missing wages accounted for. But they just didn’t do anything at all.”

He also said he had to move out of his rented flat in Brighton because he is a self-employed carpenter and could no longer afford it. 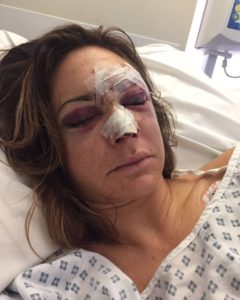 A spokeswoman for Airbnb said: “The safety of our community is our number one priority and problems for guests and hosts are incredibly rare.

“We provide all hosts in the UK with Host Protection Insurance which provides insurance coverage for up to $1 million in the rare event of an injury.

“As soon as we were aware of the incident, we reached out to the guest to provide support.”

Following the accident, which happened on July 1 this year, the flat continued to be listed on Airbnb for three days, and the host was still accepting bookings.

It was only taken down on July 4 after Brighton and Hove News contacted Airbnb directly. At the time, the host, Monika, said she was in shock and trying to get reassurance from her guests about their wellbeing.