Thousands of people from the European Union who live, work and study in Brighton and Hove have been left feeling anxious and uncertain since the Brexit referendum in June.

What will happen to EU immigrants after Brexit? It is estimated that in the past 10 years there has been an influx of 1.25 million workers from EU countries into the UK.

Nearly a million European immigrants work in jobs that are classed as NQF Level 5 or below, according to the Office for National Statistics. These are jobs that do not require an honours degree.

The figures do not necessarily reflect the true level of skills that people coming from other EU countries have to offer as many of them are even more highly qualified.

They may have been to university and have a bachelors degree, a masters or a doctorate. So, don’t be surprised if the person serving you a coffee this morning is a qualified doctor or teacher. 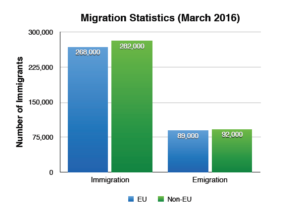 After the Brexit referendum result, there has been talk of significantly reducing the number of immigrants entering the country.

This applies particularly to those who do not qualify for a tier 2 work permit, which is the permit for someone with a skilled job.

The solution is not an easy one. Some argue that the number of immigrants in the UK has being increasing at a rate that it could become unsustainable. But what will happen to the service sector if European migrants leave the country?

Jobs like housekeeping and cleaning are mainly carried out by migrants and there is always demand for workers in this sector.

Furthermore, according to the migration statistics for the year to March 2016, the number of immigrants from non-EU countries is higher than the number of EU immigrants.

We are glad that in Brighton the result of the Brexit referendum was for Britain to remain in the European Union as immigrants have always felt welcome in this lovely city.

However, a different atmosphere was sensed by many EU nationals after the Brexit results in other cities across the country. 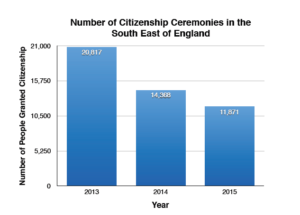 People are now living with uncertainty about what will happen and are anxious about decisions that will be taken in the near future.

To become a UK citizen you need to have lived in the UK for at least five years, prove a good level of written and spoken English and take the Life in the UK Test.

The Life in the UK Test – or the citizenship test – is a multiple choice exam comprised of 24 questions assessing applicants’ knowledge of British life, traditions, history and customs.

Have a go at a sample test here.

The number of people becoming British citizens in the south east of England has nearly halved in the last few years.

But this trend is likely to change after the referendum result as more EU citizens will be applying for the UK citizenship even as many others are considering leaving the country.

Monica Mosquera is a web consultant from Spain. She has lived in Brighton and Hove for more than 10 years, having first moved here in 2001.