A new traffic camera along Marine Parade to be installed this week will measure motorists’ average speed, the first such camera to be used in Brighton and Hove, and the first permanent one in Sussex. 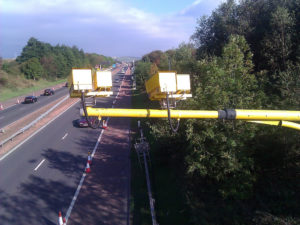 An ASC on the M90 by Craig Murphy on Flickr

Sussex Safer Roads Partnership is replacing the fixed safety camera currently in place on the A259 with the new Average Speed Camera (ASC).

It will also be putting one at Hastings between the Marina and Grosvenor Crescent.

ASCs have previously been used on the A23 during the Handcross to Warninglid improvement works. Edward Preece of the Safety Camera Team said of these: “These cameras were a key part of the safety initiative being applied whilst the construction was underway.

“This had the aim of reducing collisions, reducing injuries, and mitigating congestion issues related to a reduction in the speed limit through the road works. Journey times improved between Bolney and Pease Pottage, and we attained an improved speed limit compliance rate.”

The aim of the ASCs are to improve compliance to the speed limits, and improve congestion, commuter times, and safety.

The Brighton cameras will be put up this Thursday and Friday , one at the end of Lewes Crescent, and one at The Lanes Hotel and the and should go live early next year, with warnings in place advising motorists of any updates as the project progresses. The existing camera housings will remain in situ until the average speed enforcement system becomes operative.

On a recent week-long survey carried out in July 2016, it was found that at the Brighton site, 8.9% and 5.1% of drivers (through each point of the site) were above 36mph.