Dozens of young people were told they could not enter Brighton Town Hall this afternoon when one of them asked a public question about cuts to youth services.

They were told that they should have booked tickets in advance despite the unusually high number of empty seats in the public gallery at the Brighton and Hove City Council meeting.

They had come to hear Boudicca Pepper, 17, ask a public question about the proposed £1.35 million cut to youth services at a meeting of the full council.

But the college student added: “None of the members of the community supporting the youth service who came with me today were allowed into the meeting.”

Before the meeting, Councillor Tom Bewick, who chairs the council’s Children, Young People and Skills Committee, took time to speak to those protesting outside the town hall.

Immediately after Miss Pepper spoke, another member of the public, Nigel Furness, asked why the public “have been excluded from partaking in the democratic proceedings” unless they booked a ticket in advance.

Councillor Les Hamilton alluded to the murder of the Labour MP Jo Cox earlier this year and said that risk assessments were being carried out before each meeting. 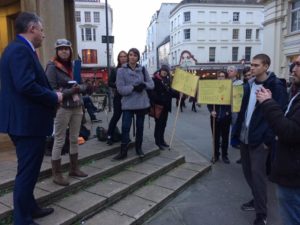 He said that proper provision was being made for people with disabilities and that even when the public was seated in the gallery of the newly refurbished Hove Town Hall, it was suitable for all.

Mr Furness said: “There have been spontaneous demonstrations outside today but people have not been admitted.

“It’s not democratic. I hope that this is nothing to do with the very nasty rumours I’m hearing that the Labour administration is looking at excluding the hoi polloi by returning to a cabinet system.”

His question about the prospect of a return to the cabinet system of decision-making went unanswered.

But Councillor Hamilton said that tickets would be required on only a very few occasions, for example, where large demonstrations were planned.

He added: “On the majority of occasions there will not be the need for contacting anybody in advance and obtaining a ticket.”

Miss Pepper also said: “We are to see very deep, damaging cuts in the budget – the loss of the city’s youth service being a prime example of a cut that in the long term will end up costing the city a lot more both financially and socially.

“What the residents of the city want to know is, what is the council actually doing to demand back the funding from central government?

“There must be a plan or our city will bleed.

“Reassure us that you are doing everything possible. You must say no, as it is not enough to just ‘make the sums fit’.”

Council leader Warren Morgan replied to her. He said: “I do take every opportunity to speak up for our city, our residents and services.”

Councillor Morgan said: “It certainly isn’t the case that we are excluding or ignoring young people.”

He urged young people to speak up directly to the government and to contact their MP.