Mr Pannett, 49, of Hangleton Road, Hove, has closed for the final time after 16 years selling pet supplies and dispensing laughter from his shop in West Way, Hangleton.

He said: “I’m going to miss all of my regulars. Over the years I’ve got to know a lot of their life stories.

“It’s like having to wean yourself off of EastEnders after 16 years. I’ll have start watching that now to get my fill of tittle tattle and misery.” 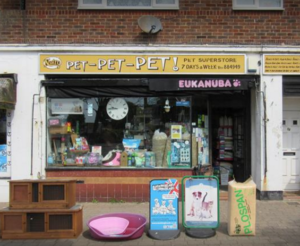 When Pet Pet Pet opened, opposite the Grenadier pub, Mr Pannett had a licence to sell live animals but gradually focused more on pet supplies.

He said: “I didn’t sell animals for the last year. I used to sell hamsters, gerbils and guinea pigs, spiders, lizards and snakes.

“I probably sold about half a dozen tarantulas although I wouldn’t stock them.” 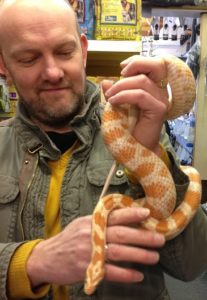 Nick Pannett with a slippery customer

“It was chirping away and I said to the bloke behind the counter, ‘I’ve got a flying squirrel in my pouch.’ And, totally deadpan, he said that’ll be £7.40.

“It didn’t work. It remained a moody bugger so I had to give it back – the flying squirrel.

“A couple of people inquired about monkeys which I had a licence to sell in the early days but I didn’t have a source which was just as well as you probably need a London Zoo-sized back garden. I’d have wanted to see a 200ft enclosure.” 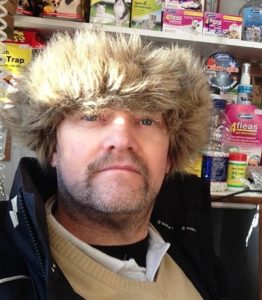 Worms or fleas? Nick Pannett was the man to turn to

Mr Pannett, who grew up in Mile Oak and previously worked in IT, has no pets of his own any more. He used to have three westies – West Highland terriers – and added: “I miss my dogs.”

He was trying to reduce his hours and was managing to get away for the occasional weekend before he sold up and retired to focus on his modest property portfolio.

But he said: “For a couple of years I was doing seven days a week. I miss the village feel. It was nice to be opposite Uncle Sam’s, opposite a pub and next to a chippie and near a Chinese.

“There’s a slight feeling of not having a role. I also felt a bit guilty that I retired so early … but I’m over that now.”