Planners have criticised a scheme to build a retirement home for elderly people in an area of Brighton that has suffered regular flooding.

They voted to turn down the plans even though their vote won’t count and the final decision has been taken out of their hands.

The scheme – in Old London Road in Patcham – involves knocking down five family homes and putting up a three-storey building containing 44 retirement flats.

In June an independent inspector will effectively decide the planning application after an appeal from the developer YourLife Management Services, from Woking, Surrey.

YourLife said that Brighton and Hove City Council had failed to decide the application within the legal time limit.

It was criticised when the council’s Planning Committee met this afternoon (Wednesday 11 January). Members were told that officials had had questions for YourLife but that they had gone unanswered.

One councillor, Lee Wares, a Conservative, spoke about the flood risk to the site which is in his Patcham Ward.

Councillor Wares said: “Every year we have to review our plans to evacuate people in the event of flooding. The thought of bringing in dozens of vulnerable people is horrendous.

“This is a flat-pack design that has no place in a community and village such as Patcham. It speaks volumes that the developer is not here to answer questions.

“This is an application that has come before the council twice before and has been refused twice before. They appealed twice and withdrew twice.

“But if the planning inspector was to ignore the unanimous wishes of this Planning Committee to refuse this application and not listen to 360 residents who have objected, it would be a travesty.”

His views were echoed by councillors from the other two parties – Labour and the Greens – and were spelt out after Chris Balchin, who lives in Old London Road, shared pictures of previous floods in the street.

Mr Balchin said: “You had water coming off the Downs. You had sewage in the road.”

He said that there were serious flood alerts or problematic floods every two to three years.

An official report presented to the Planning Committee listed flood alerts in each of the past five years. 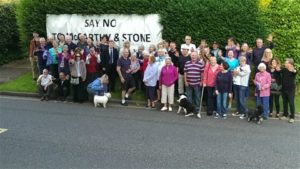 Green councillor Phélim Mac Cafferty, a former chair of the Planning Committee and deputy leader of the council, recalled Christmas Eve 2012 when he was on duty in place of the council leader.

Patcham and Portslade were on flood alert, he said, with a serious and credible threat of flooding, rain falling and ground water levels rising.

Councillor Mac Cafferty added: “From that point on, we’ve had repeated warnings. This isn’t an area that is appropriate for development.”

Another former chair of the Planning Committee, the Conservative councillor Lynda Hyde, told the meeting at Hove Town Hall: “Despite Southern Water’s comments, I’m concerned that the applicant hasn’t responded.”

Both Southern Water and the Environment Agency set out reservations, with the latter describing Patcham as a flood risk hotspot.

And Southern Water said that extra local infrastructure would be needed to cope with the proposed retirement home which would otherwise add to the risk of local floods.

Councillor Hyde said that YourLife had not entered into talks to resolve these issues and leaving them unresolved was part of the reason for the council running out of time.

She added: “This will totally detract from the street scene. It’s not in the conservation area but it’s very close to it. It will be totally out of character for the area.”

Labour councillor Adrian Morris said: “I’m disappointed that the applicant didn’t engage appropriately with the planning department during the 13 weeks.”

Objectors are sharing information about the progress of the plans on a website called Protect Patcham.