A severe weather warning for snow has been updated as the likelihood of wintry showers and high winds in the south east has increased. 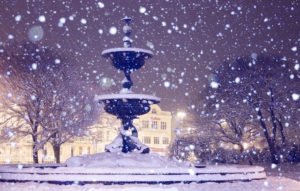 The Victoria Fountain in the snow. Picture by Dominic Alves on Flickr

The Met Office said this morning that while its warning, issued yesterday, was still at the yellow be aware level, the likelihood had increased from very low to low.

It said: “Rain moving eastwards across the south of the UK on Thursday may turn to snow in places.

“There is a chance of snow settling with disruption to road, rail and air services as well as interruptions to power supplies and other utilities – this more likely across East Anglia and southeast England. Associated heavy rain and strong winds may prove additional hazards.

“As skies clear on Thursday night there is also potential for widespread ice to form quite rapidly on untreated surfaces.

“This is an update to slightly increase the risk of disruption from snow, as well as to introduce ice as a hazard.

“As a developing area of low pressure moves east across southern Britain on Thursday there is potential for rain to turn rapidly to snow as cold air is drawn in.

“However, there is a great deal of uncertainty over the track and intensity of this system, meaning that confidence is low in the amount and extent of any snow.”

The BBC forecast now shows heavy snow in the early evening on Thursday, followed by rain, with light sleet showers on Friday morning. It predicts wind speeds of up to 52mph as the heavy snow hits from 7pm on Thursday.

Motorists are warned to drive with diligence, especially on country roads, where there may be greater chances of ice.

David Kemp, from East Sussex Fire and Rescue Service, said: “The change in conditions on the roads can make it difficult for bikers, motorists and cyclists.

“It’s really important to take this into account before you set out and to remember our actions on the roads affect others. Simple things like making sure you’re seen or slowing down gives us all a better chance of arriving safely – in other words drive to arrive.”