City prepares for snow and ice

The city’s seven gritters will be out on the roads this afternoon as the Met Office says snow is likely, with a possiblity of up to 10cm snowing this evening. 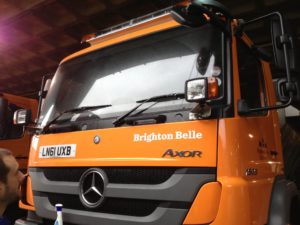 Brighton and Hove City Council’s severe weather shelter for rough sleepers will be opening today and homeless workers throughout the city are informing homeless people how to access them. If you’re concerned about a rough sleeper, call 0300 500 0914.

The Met Office’s severe weather warning for snow began at midday, and was updated this morning to say that it’s most likely that between 1-2cm of snow will fall in some low lying areas across the south east this evening.

However, it also warned of a small chance of much more snowfall, with up to 10cm possible in low lying areas.

A new weather warning for ice has also been issued for Friday morning, with a small possibility of more sleet and snow in the south east.

Its forecast for Brighton has been changing slightly over the last 48 hours, but it has consistently predicted heavy rain and high winds this afternoon changing to snow by early evening.

A council spokesman said: “We are expecting treacherous road conditions this evening. We would advise people to avoid travelling wherever possible during severe weather.

“It’s a constantly changing situation which the council is monitoring closely. We conducted a full gritting round of the city last night.

“A concern is that if we have rain today this will wash grit and salt away. A subsequent drop in temperature, possibly combined with any snow, sleet or rain, could lead to dangerous road conditions. We will be undertaking another full gritting round from 4pm. As always this covers all ‘A’ roads and other busier roads along which most journeys are made. It cannot cover many lesser routes and residential streets, where extreme care should be taken.”

Councillor Gill Mitchell, chair of the Environment, Transport and Sustainability Committee, said: “The council is well prepared for winter conditions but in cases of severe weather we need your help too. It’s important that we support each other during severe winter weather such as clearing paths and checking on elderly neighbours.”

When temperatures drop the council pre-salts the roads to prevent ice or frost forming. Pre-salting does not stop the snow from settling unless it is fine sleet, but it helps with ploughing the snow from the roads.

There is approximately 1,100 km (687 miles) of pavement in the city so the council can only clear main thoroughfares if it snows. Grit bins are provided at 420 of the coldest, steepest parts of the city for anyone to make use of. However, residents are asked to use sparingly as the bins will only be refilled during very severe winter conditions.

The council has 1500 tonnes of salt, including a contingency supply at Shoreham Harbour held for us by our contractor. It rotates its stock at Hollingdean Depot so what wasn’t used last year will be used first this year. Any savings from the winter budget are placed into a contingency fund to cover the high costs incurred during severe winters particularly when snowfall occurs

The council’s winter service team also supports residents and community groups, who want to set up schemes to support one another during severe weather.

It encourages residents to keep an eye on elderly and vulnerable people who may have needs around food, medicine or care.