Twitching to start as annual Birdwatch survey gets under way

Starlings over the pier, Seagulls and pigeons scavenging and even the odd bird of prey – Brighton and Hove has no shortage of winged wonders.

And over the next three days hundreds of locals will be keeping a weather eye on our feathered friends for the annual Big Garden Birdwatch survey.

This year for the first time the Royal Society for the Protection of Birds (RSPB) has set aside three days for what it said was the biggest wildlife survey in the world.

And the RSPB added that more people had registered to take part than ever before, with the results due out in March.

More than half a million people have registered for the survey, now in its 38th year. They include hundreds of people across who will be watching and recording the birds in their garden today (Saturday 28 January), tomorrow and on Monday. 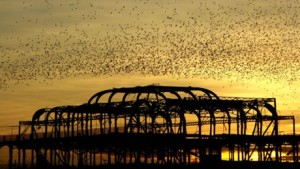 The RSPB said: “The public is asked to spend just one hour watching and recording the birds in their garden or local public space, then send their results to the RSPB.

“In our increasingly urban world, ensuring there is still room for wildlife is key to the survival of many familiar species.

“RSPB Big Garden Birdwatch provides valuable information about the wildlife using our gardens in winter, enabling the RSPB to monitor trends and declines. It is also a chance to take time to appreciate the nature on our doorsteps.

“Last year over half a million people counted more than eight million birds – and even more are expected to take part this year, with more people registering in 2017 than ever before.

“In response to demand, for the first time this year the Birdwatch will take place over three days, including the Monday, giving workers the opportunity to take a screen break and participate from their office gardens.” 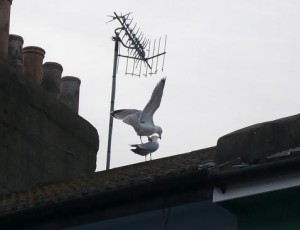 Seagulls on the roof by Jessica Spengler on Flickr

Daniel Hayhow, RSPB conservation scientist, said: “With over half a million people now regularly taking part, coupled with over 30 years’ worth of data, Big Garden Birdwatch allows us to monitor trends and helps us understand how birds are faring.

“With results from so many gardens, we are able to create a ‘snapshot’ of the birds visiting at this time of year across the UK.

“Even if you see nothing during your Big Garden Birdwatch hour, that’s important information too, so please let us know.”

The top ten for Brighton and Hove a year ago was headed by sparrows and starlings, followed by pigeons. Blue tits, blackbirds, magpies and robins all made the top ten while gulls – common and herring gulls – were in the top twenty, along with crows, collared doves and wrens.

In all, nearly 80 species were spotted in Brighton and Hove gardens over the final weekend of January.

Nationally, the house sparrow retained its top spot, with the starling and blue tit rounding off the top three.

The RSPB said: “This year, if the cold snap persists, we could see more unusual birds appearing in UK gardens. This winter, there have been reports of waxwings arriving in their hundreds along the east coast, and dispersing as far west as Wales and Ireland, in search of berries.

“These attractive birds with a black eye stripe and punk-like crest only visit the UK every seven to eight years (known as an ‘irruption’) when food is scarce in their native Scandinavia.

“Look out for other Scandinavian visitors such as redwing and fieldfare also making the most of our bumper berry crop.”

As well as counting winged garden visitors, the RSPB is once again asking participants to log some of the other wildlife they have seen throughout the year, such as grass snakes, hedgehogs, stag beetles, stoats and moles.

Mr Hayhow said: “Our wildlife is facing a tough time. For example, it is estimated that we’ve lost more than half of our hedgehogs in the last 50 years.

“We’re going to include this part of the survey every year now, enabling us to monitor the distribution of our other wildlife as well as trends in bird numbers.” 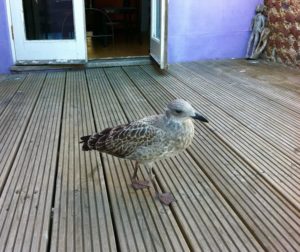 David Wembridge, mammal surveys co-ordinator at the People’s Trust for Endangered Species, said: “Mammals are a less showy lot than birds but their presence in gardens is as important a measure of the natural value of these green spaces.

“Recording wildlife, in surveys like Big Garden Birdwatch, gives us a connection to our wild neighbours, particularly those we might overlook.”

“For example, a bramble patch and a pile of fallen leaves can provide a good nesting site for hedgehogs while bats will feed on night-flying insects attracted to blackberry flowers.”

John Wilkinson, from Amphibian and Reptile Conservation (ARC), said: “It’s great to see that the Big Garden Birdwatch is again recording species such as grass snakes and slow-worms, whose habitats are declining in the wider countryside.

“Slow-worms are a gardener’s friend. You can encourage them into your garden by having a compost heap which is left undisturbed over the summer so they can give birth there. They will repay you by demolishing your slugs. If you’re lucky, grass snakes may even use your heap for egg-laying.”

The RSPB said: “Gardens provide invaluable resources for many species, especially in urban areas where natural habitats are disappearing.

“The RSPB is asking people to invite wildlife into their own gardens, balconies and outside spaces – whether by putting up a nest box for birds, creating a pond for frogs and newts or planting a window box for bees. Wherever you live, you can help give nature a home.

“Tell us the highest number of each bird species you see at any one time – not the total you see in the hour.”

To register and download a free Big Garden Birdwatch pack, visit rspb.org.uk/birdwatch. The results will be published in March.

Big Schools’ Birdwatch takes place during the first half of spring term, from Tuesday 3 January to Friday 17 February. For more information, go to rspb.org.uk/schoolswatch.