Union leader rails against Southern during election trip to Brighton

Gerard Coyne said that Southern Rail bosses were “unfit for purpose” and should be sacked – and he criticised government ministers for backing the incompetent management.

Mr Coyne, who is challenging Len McCluskey for the leadership of Unite, said: “Strikes are always a weapon of last resort. But quite frankly if Southern Rail management can’t run a successful service on the London to Brighton line, they need to think about a new career.

“It’s time they were given the shove and commuters given a decent service.

“Workers don’t take losing pay lightly but when the service has been eroded to the point of no return, with passenger safety at risk, it’s no surprise they have to take strike action.

“Of course that is inconvenient for commuters. That is very unfortunate. But I think many have been at their wits’ end for years with the shocking deterioration in service.” 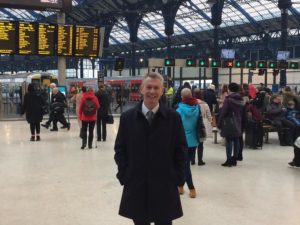 Mr Coyne, currently Unite’s regional secretary in the West Midlands, added: “The Southern rail shambles is a mess made in Whitehall.

“Ministers went out of their way to back an incompetent management in their crusade to crush the unions on Southern.

“Now that has blown up in their faces and they are trying to find new ways to pass on the blame.

“Instead of dealing with the problem, they propose to attack the right of rail workers, and others, to withdraw their labour, which – whether Conservative ministers like it or not – is a basic democratic right recognised in any free society.

“It is vital for the regional economy that an area like Brighton, which should be a southern powerhouse, gets the infrastructure it deserves. That would secure investment and jobs.

“But I don’t see that happening under the present management.”

Mr Coyne spoke out during a visit to meet with Unite activists in Brighton as part of his nationwide campaign to become the union’s general secretary.

He is regarded as the moderate candidate in the battle to run Unite, which has 1.4 million members. Mr McCluskey has become more closely identified with the Labour leader Jeremy Corbyn,