Thameslink services are delayed this afternoon after London Bridge Station was closed due to a security alert. 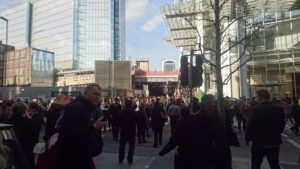 The Metropolitan Police has requested that no trains run through the station, which is leading to massive delays that are expected to last until 4pm.

The BBC reports that the Met Police says it’s due to a suspicious vehicle near the station, which has led to an exclusion zone throughout the area.