Brighton and Hove Buses’ centre fare is set to rise from £2 to £2.20 when you pay in cash as part of rises to bring in 1.5% more revenue. 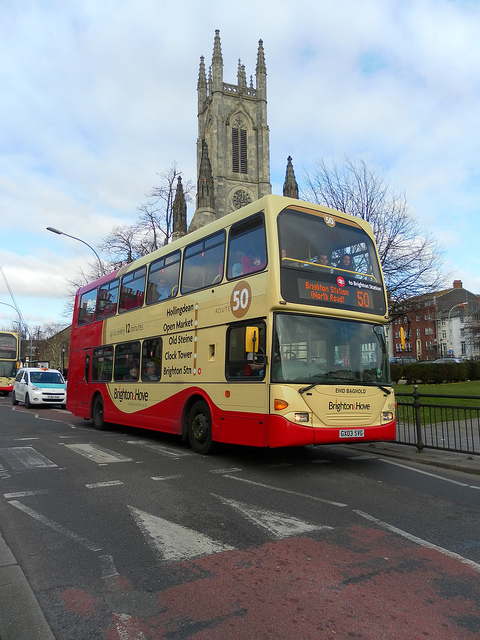 The bus company says it is making the changes to try and persuade passengers to buy a fare in advance and speed up boarding times, with the smartphone M Tickets app centrefare charge remaining at £2.

Other main cash fares paid by bus users are all frozen including all young person’s Bus ID saver tickets and special single fares, short hops, the £2.50 main fare and the one-day city saver. One and seven-day city saver tickets bought by mobile phone or key card are frozen for the second year.

Brighton and Hove Managing Director Martin Harris said: “Despite excellent support from the council with bus priority lanes over the years, congestion is our single biggest challenge to running a reliable, frequent, efficient service.

“Every year it gets worse and we simply can’t ignore it. We’re always looking at ways to decrease journey times for our passengers.

“We’re committed to investing millions for a better and cleaner future for the size of our bus service and this city.

“We know people are having a tough time right now and that’s why we’ve done our best to make the annual review as reasonable as possible.

“Rising congestion year on year means we have to increase the number of buses on a route, or reduce their frequency, or both. We don’t have a choice.

“We serve the biggest population of bus users per head of population outside London and we want to continue to provide a reliable, frequent and efficient service.”

Advance tickets, such as M-tickets and key cards now make up 83 per cent of cashless passenger journeys for the operator. Though Brighton and Hove Buses intends to retain the cash option for those customers who don’t wish to pay any other way for the foreseeable future, it wants to encourage more people to buy the cheaper tickets that are sold in advance.

The bus operator has also increased its support for disadvantaged groups to help them to travel by bus to health, welfare, employment and training appointments.

Congestion – recognised nationally as the number one risk to bus services keeping cities moving – is causing bus journey times to rise by 1.5 per cent every year putting pressure on Brighton and Hove Buses to increase the number of buses on the road just to maintain the same frequency of service. Operating costs go up in direct correlation by 1.2 per cent.

To help combat the problem, the city’s bus operator has elected to freeze around seventy per cent of fares in its annual review to come into effect on April 25, but instead will increase cash fares for what are known as the centre fare area – previously frozen for five record-breaking years. To avoid the increase, customers can simply pay in advance on their phones.

The 1.5 per cent – below inflation – net increase in revenue from the annual fare review will help the bus operator to maintain service levels of those buses severely affected by congestion-related delays.

Brighton and Hove Buses has worked successfully with the city’s council on initiatives to help speed up buses including a network of bus priority lanes such as the Western Road/North Street corridor, the A259 Coast Road and the A270 Lewes Road.

The bus operator, which has been helping the city to buck the national trend of declining bus use, is currently trialling an electric bus on the number 50 route in the city.