Richard II, arguably one of Shakespeare’s least accessible plays, has been quirkily brought to life in the most unlikely of formats – a two-hander, with puppets, in ONCA’s tiny new courtyard space, ‘The Cave’. 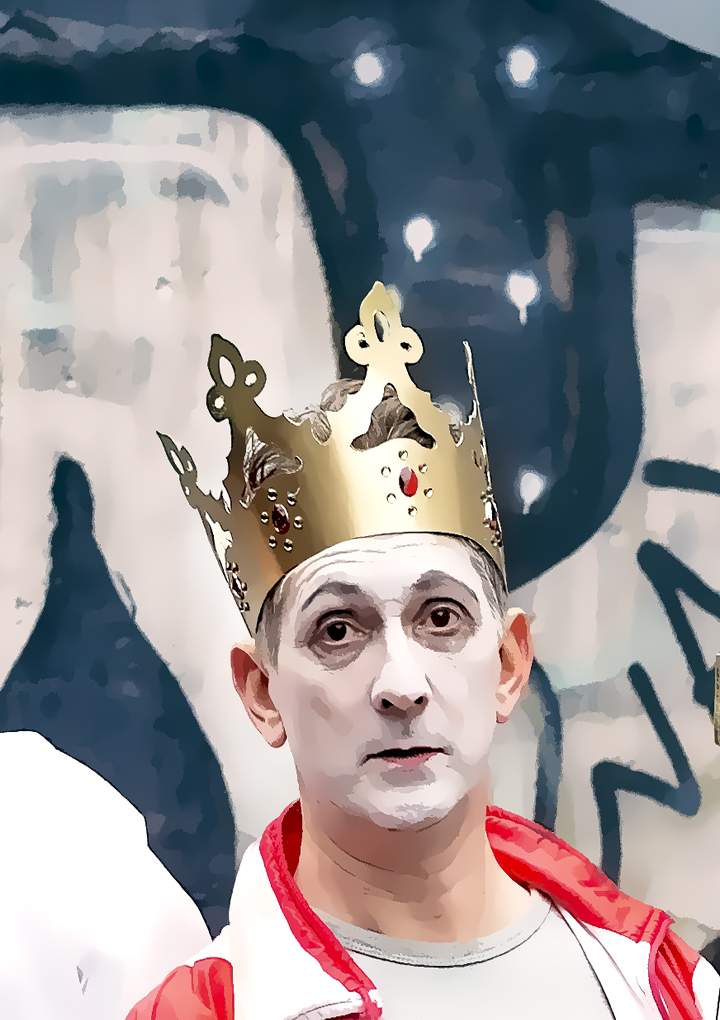 Gregory Gudgeon directs and leads this production from BowerBirdPrague as a ghastly, mad-eyed Richard, smeared with white paint, who is both protagonist and puppeteer. He is ably assisted by performer/stage manager Lucas Augustine, who plays various instruments, operates sound effects, passes props, and generally acts an affectionate foil – and sometimes prompt – to Gudgeon’s bumbling monarch.

The action begins as the puppet king emerges from the depths of an old tunnel system below the ONCA gallery into the tiny courtyard, which has been covered over with white fabric to create an atmospheric and intimate space. He tells the story of Richard II’s banishment of the feuding lords Mowbray and Henry Bollingbroke – the latter of whom will return to usurp the throne and cause the king’s downfall – using small basic puppets. It must be said the lack of characterisation of these objects made the action hard to follow – the impression was of a child playing with his toys, rather than performing for us. Overall the first half had a faltering pace – with lost props and lights not turned on; however this added to the sense of the monarch puppeteer’s senility and added humour to the proceedings.

In the second half large, beautifully expessive puppets were used to much greater effect – including on of Richard looking remarkably animate and like Gudgeon himself – and the show came into its own. We see the pompous king’s fall from grace as his followers desert him and his nobles betray him, leaving him no option but to abdicate. Purposeful parallels are drawn between Richard and Trump, with a Twitter account even having been set up for the erstwhile monarch. There are echoes of today’s divided political landscape, nationalism and Brexit too, making poignant the famous lines “this jewel set in a silver sea – this blessed realm – this England”. It reminds us this land has always been fought for and battled over, which I found quite moving.

Richard cuts a more sympathetic figure than perhaps Trump might, as we see him reduced to a broken, abandoned shadow of his former self, imprisoned in the Tower (the physical setting adding greatly to the atmosphere, and no less effective for lacking a set, with audience members employed as prop handlers). The thought occurs that the line-fluffing and shambolic puppeteering might all have been part of the act, the actions of a lonely, demented man trying to make sense of his story.

While the show’s pace and shape has flaws, the eponymous anti-hero is brought to life with great sensitivity by Gudgeon, and it is an original, witty and engaging take on a sometimes obscure play; it shines a light on a dark period of England’s history and by doing so illuminates today’s equally murky stage, leaving us to ponder on just what is waiting in the wings.