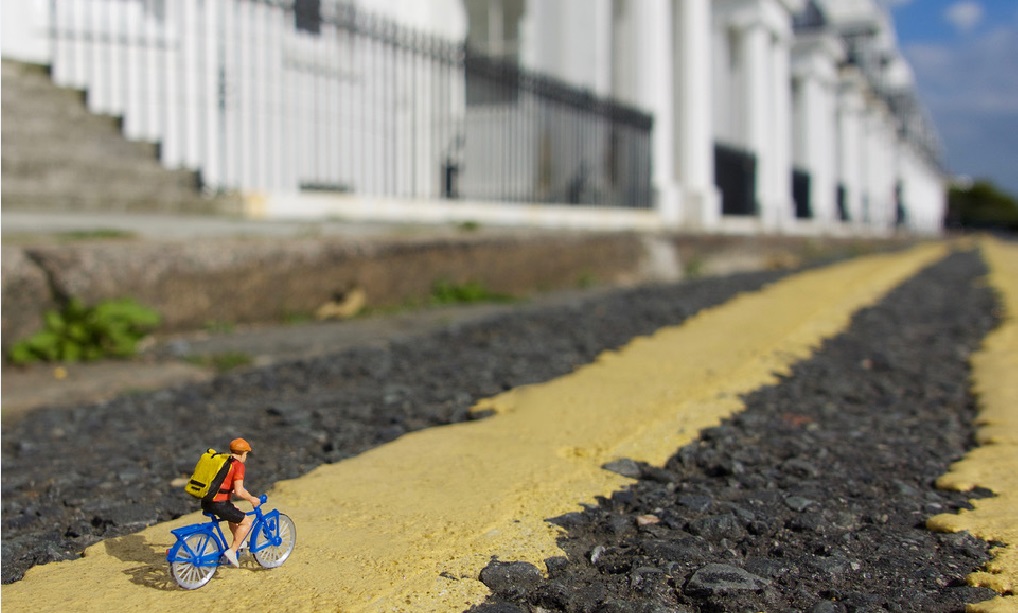 Paul Rowlands is a local cabbie and enthusiastic photographer who has lived in the Rottingdean for the past 10 years.

He has exhibited at Artists Open Houses in Kemp Town for the past couple of years.

We caught up with him for a quick Q&A session before his first curated show at the Grange Gallery in July, where he himself will be showing a number of prints and installations.

What is the July exhibition at the Grange Gallery in Rottingdean all about?

I’m a member of Kemp Town Arts Association, which is where I normally exhibit as part of Artists Open Houses. I wanted to put together a short exhibition of the talented people we have in our arts community in Kemp Town, as well as a chance to show a little more of my work including a few installations.
It will be just eight artists and is only on for six days from Thursday 13th to Tuesday 18th of July. It will however be a great chance to show the diversity of our work.

Can you tell us more about the Little People?

Yes, they are the figures that you would normally find on miniature railway layouts like Hornby train sets. The scale is 1/87 or OO gauge, which makes them about as tall as your little finger nail.
The ones I use are made by a German company called Preiser and are regarded as the best quality models available in this scale. I truly believe that the level of detail is fabulous.

What made you start this Little People project?

I’m a kid at heart and I was lucky that my father was a steam train driver on the Great Western Railway. So my weekends as a child were spent going to shows in order to see these huge engines, but to be honest I was happier looking at the model sets that they would usually have. Alas, we could never afford a train set when I was growing up and like many a middle aged man I am indulging my childish whims now. I thought I would just buy around a dozen of these little people figures in order to experiment with, because I was just about to go on holiday to France and I believed that this would keep me entertained. 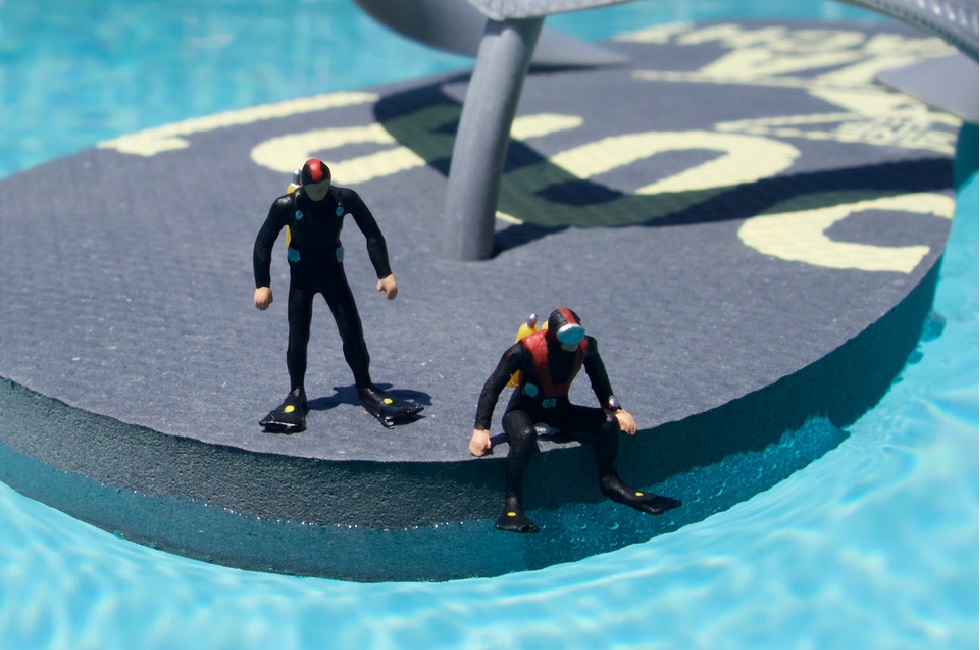 Divers Pool in the South of France

My photograph titled The Divers was in fact the very first image that I ever produced and it was in June 2015 that I used my flip flop in our hotel pool in the south of France, Nice to be exact.

Where do you get you’re ideas from?

I don’t really know, but after a while you just start looking at small items differently. For instance a bottle top could be a boat and a paperclip becomes scaffolding. I find flowers are always great inspiration and also the slugs and snails in my garden. These simple creatures become huge monsters at this scale and even a fly can make a great image at this size. 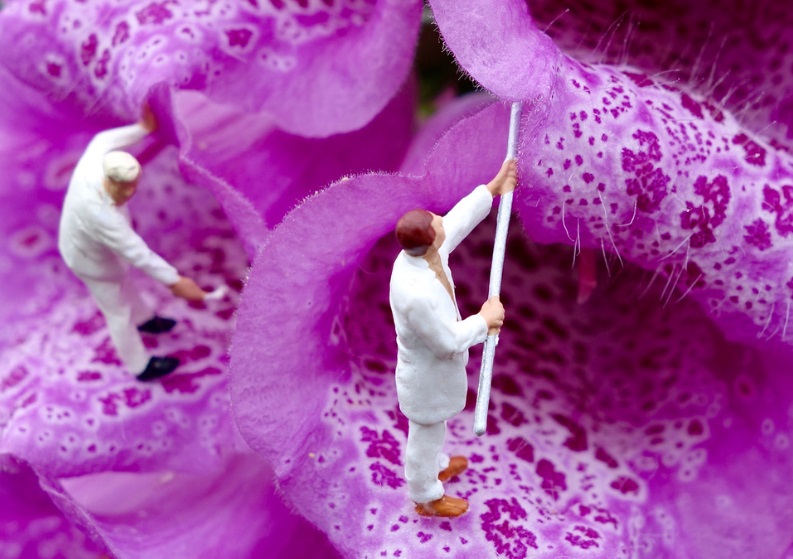 A little bird told me, that there was apparently a dead fly as part of your last exhibition at the Grange in Rottingdean. Is this true and can you tell me about that?
Yes indeed, it was a blue bottle I think. I found it on my windowsill and I thought it would look really effective if one of my little people was trying swat it. Then, I thought that it would be fun if I could carry the story on and see what would happen next? So I had paramedics on the second week of the exhibition who trying to save the fly. Then on week three, there was a CSI scene, where they were trying to work out how the fly died. Then on the final week, I had a funeral cortege which was complete with mourners and priest. It was really playful and caused quite a stir really! Or should I say buzz!

I will have a number of little installations going into the forthcoming show in July, which I am really excited about.

You must have a very high end camera?

No, not at all, I use a pocket camera for all the Little People images. I use the Sony RX100 which gives a very sharp clear image. It’s great because it’s so light. I don’t think I could carry around a big camera, especially with a ruck sack crammed with small people.

Yes, I’m certainly not doing it for the money. My work is quite fun and it carries no political messages or deep meaning. It’s simply created in order to just make you smile and so I want to make them affordable for everyone to enjoy. If they get hung on someones wall and they brighten up their day when they see them, then great!

Do you have a favourite image? 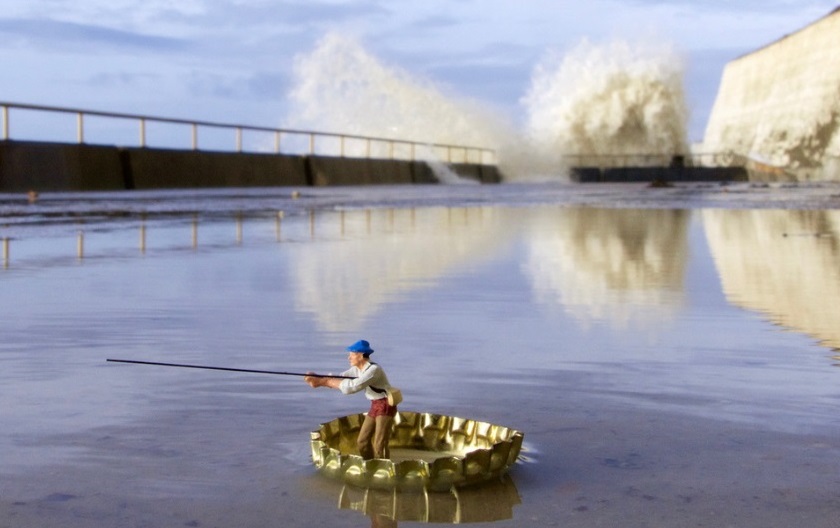 Oh that’s a tricky one, but if pushed then I think I am most proud of my Rottingdean Fisherman as it took quite a bit of patience in order to get the required light for the image and also to get the right size waves and the correct reflections. You know, I actually waited four days and numerous attempts to get the correct shot that I knew that I would be really content with. Before you ask, yes I did get very wet and cold knees that day. 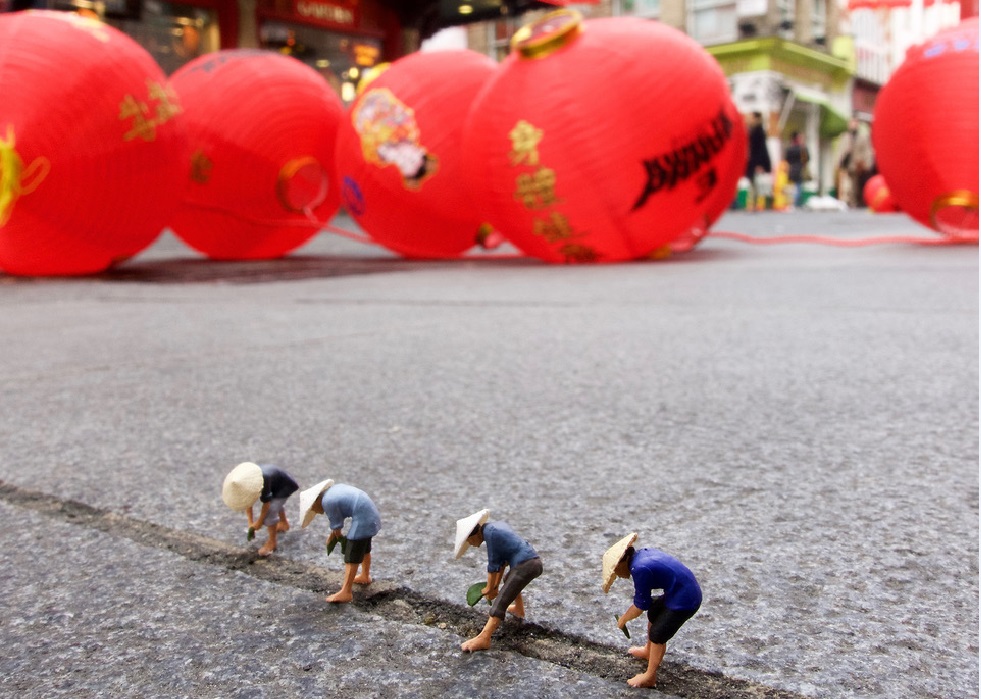 Oh hold on come to think of it, my absolute favourite came as a happy accident. It’s called Chinatown. I was walking through Soho on my way to an exhibition at the Photographer’s Gallery and it was two days before Chinese New Year. People were hanging Chinese lanterns in Gerrard Street and Macclesfield Street and I suddenly remembered that I actually had some Chinese rice field workers in my rucksack – as you do! I immediately thought that they would look great as if they were picking weeds up from between the paving slabs, you know a tidy up ready for the festival. I was lucky to have them with me, but then these days I always carry around 250 little people with me at any time, just in case I stumble across something rather interesting.

Oh no, I have near 600 at last count. I try and treat myself to at least a dozen new ones each month.

So, will we be seeing more of these in the future?

I only make around one special image per month, that I can honestly say that I am really happy with in order to print it. I will continue to do that for the foreseeable future, but I also enjoy making cinemagraphs (which I will be showing at the forthcoming exhibition). They are a mix of still image and looping video and they certainly make you look twice for sure. I also have a new vehicle based project which I am starting this summer and I will be

showing at Brighton Photo Fringe in the autumn of 2018. 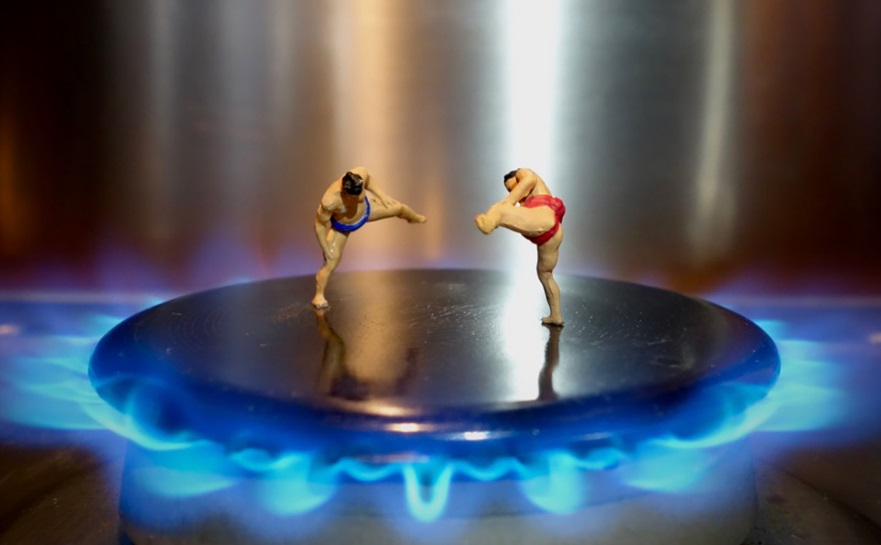 Extreme Sumo bout heating up (Don’t try this at home!)