Police dogs Troy and Diesel have won plaudits for their crime-busting work, with a drug dealer now behind bars after a recent search. 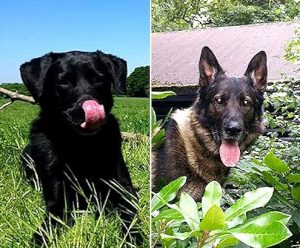 Diesel helped his handler PC Mark Tully to find cash and drugs when they searched a car which had been stopped near the corner of Lewes Road and Coldean Lane, Brighton.

Officers found a sock containing drugs wraps hidden behind the car stereo in the silver Peugeot 307 during the search on Monday 5 June.

Sussex Police said: “A further search was conducted with the assistance of PD Diesel, a seven-year-old black labrador trained to find cash, drugs and firearms.”

Diesel kept indicating the same spot – and the force said: “His handler, PC Tully, reached in and found another sock containing approximately £1,000 in cash.

“PD Diesel then indicated at the same spot again and a further sock containing drugs wraps and a mobile phone was discovered.

“The driver, 26-year-old Zan Cekaj, an Albanian national of no fixed address, was arrested and charged with possession with intent to supply cocaine, possession of identity documents with intent and possession of criminal property (a fraudulent Romanian driving licence).

“He pleaded guilty to all offences and was sentenced to a total of 39 months in prison at Lewes Crown Court on Friday 28 July. He was also ordered to pay a £170 victim surcharge.”

PC Tully said: “You can use any piece of kit or equipment available to you but when it comes to searching for a person or for property – such as drugs, cash or weapons – a dog’s nose is the sharpest tool in the box.” 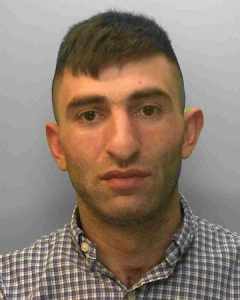 In a separate search a 21-year-old man from Hove was arrested near Brighton Racecourse after running and hiding from police.

Sussex Police said: “At about 8.40pm on Wednesday 5 July, police attended a report of a suspected drugs deal in May Road, Brighton, where two men were seen to run from the scene.

“PC Will Hewson, assisted by five-year-old PD Troy, a German shepherd general purpose dog, carried out a search of the area and located a man hiding in a wooden shed in nearby allotments.

“The 21-year-old man from Hove was arrested on suspicion of possession with intent to supply class A drugs and has been released under investigation.

“There was no trace of any further suspects. However, a search of a car park in the area led to the discovery of a quantity of a suspected class A substance from within the wheel of a silver Vauxhall Astra which was seized for evidence.”

PC Hewson said: “All our general purpose dogs and specialist search dogs have hugely sensitive noses, countless times more sensitive than ours and far beyond the reach of any piece of police equipment.

“Their skills are honed through training to make them a formidable crime-fighting tool with the ability to locate a wide range of items such as drugs and weapons as well as people who may, for example, be wanted or missing.

“Technology is constantly evolving. However, we have yet to come close to anything to replicate our dogs’ remarkable sense of smell.

“Despite working with these dogs day in, day out, they continue to amaze us with their ability to detect things which may otherwise go unnoticed by a police officer.”