Students at BHASVIC are celebrating A-level success with 13.3 per cent achieving at least one A*.

The sixth form college has achieved a 64 per cent A* to B rate this year – up 1 percentage point. 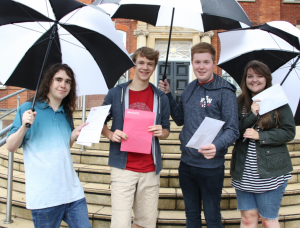 The rate of A* to Bs has remained steady despite changes to A levels, with students’ grades resting entirely on their final exams at the end of two years.

The results at BHASVIC (Brighton, Hove and Sussex VI Form College) were consistent despite the changes and the number of A* grades even rose by 1 per cent each compared to last year.

BHASVIC said: “These results cement BHASVIC’s position as one of the best performing sixth form colleges in the country which on similar outcomes to the previous year saw the college ranked in the top five sixth form colleges nationally on both raw results and value added data.” 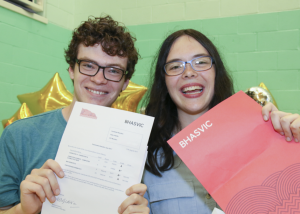 He said: “I am absolutely delighted with the overall outcomes, particularly with the change in nature of A levels to the new framework.

“We’ve seen an overall rise in our high grades which, given the changes in framework, is a fantastic testament to the hard work of our students and staff.

“It is worth recognising that success comes in all shapes and forms.

“For some students getting an E is success and as long as students can look at themselves and think ‘I did the best I could do’, that is success.

“For example, we get a lot of students going to Bournemouth to do media and it doesn’t make the headlines because it’s not Oxbridge. But it’s a prestigious course – the Oxbridge of media studies.” 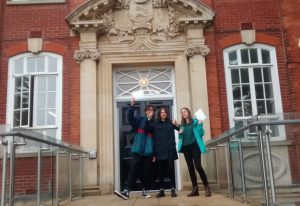 As students dodged the rain outside the college, in Dyke Road, Hove, Mr Baldwin, added: “I’m over the moon. Our staff and students work hard and it is nice to see it all coming to fruition on what feels more like an autumnal day than a summer results day.”

Thirty-nine students have been offered places at Oxford or Cambridge although it wasn’t clear how many had the grades to take up their offers.

Mr Baldwin was delighted with the high number of Oxbridge offers given that BHASVIC is a non-selective open access college.

On the changes to A levels this year, he said: “Our reputation is key despite the changes that central government may impose on us.” 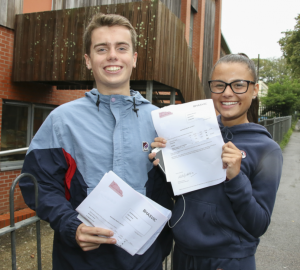 Student Jonny King, who is heading to Sunderland after a gap year which he plans to spend working, achieved an impressive AAB.

He said: “It was very daunting because it rests on one final exam. You have to remember two years of information and it all rests on two three-hour exams at the end.” 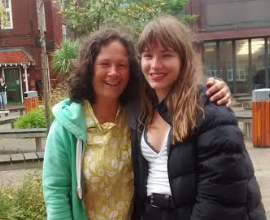 Francesca D’enno was celebrating A*A*A*, a staggeringly high result which BHASVIC’s principal said was not uncommon each year at the college.

Miss D’enno also plans to take a year out and travel. She said that she wanted to study English literature but had not yet decided where she would apply.

She said it was difficult to prepare due to the lack of past papers for the new exams but the teachers were “good at telling us what we might expect”. 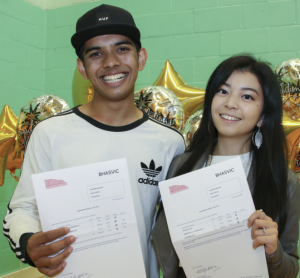 The college said: “Results for vocational qualifications are equally impressive. These courses achieved a 96.5 per cent pass rate, with a phenomenal 82 per cent at distinction or above.”

Mr Baldwin said: “We pride ourselves on being ‘open access’ and non-selective in the students we take (prospective students can study three A levels here if they have achieved six GCSEs) and these results remain some of the best in the country even in comparison to selective and independent schools.

“Both teachers and students should be rightly praised for these results, especially given that to achieve them they had to navigate new specifications and assessment frameworks in some subjects.

“Parents and our partner schools must also get credit and thanks for their input into these results.

“They are testament to the learning culture that has been created here at BHASVIC and are evidence that students who come here have every opportunity to fulfil their potential.

“Congratulations to all our students – whether they are going off to university, gap years or into the workplace. We wish them the best of luck for their future.”