Palace Pier boss Luke Johnson has promised a £1.3 million upgrade to the Brighton seafront attraction’s bars and restaurants as profits soared. Work is due to start start in October.

Mr Johnson, executive chairman of the Brighton Pier Group, said: “As well as a major upgrade to all our facilities, these changes will significantly increase capacity inside and out and provide new conference and events opportunities all the year around.”

The company, which also owns 14 bars and was previously known as the Eclectic Bar Group, said that group revenues rose 39 per cent to £31.3 million in the year to Sunday 25 June. This compared with £22.6 million in the previous 12 months.

Mr Johnson said: “The board has decided to approve an ambitious plan to upgrade the catering and bars facilities on the pier.

“Over the coming winter season, Palm Court and Victoria’s Bar will close to undergo a full refit.

“This upgrade will involve a substantial modernisation of the restaurant and bar as well as creating flexibility to provide either one large or two smaller conference and events spaces throughout the year.

“Combining the main restaurant and takeaway kitchens will enhance efficiency and increase internal and external seating capacity by 60 per cent.

“At the same time, but over a shorter period, similar work will take place on the refit of Horatio’s.

“Opening up the walls to extend this bar to the outside will enable customers to benefit from its enviable position on the pier, with views over Brighton and the seafront.

“The upgrade to Horatio’s and its outside terraces will increase overall capacity as well as enhancing the bar’s ability to offer food, live music and other events throughout the year.

“There will inevitably be some sales and profit impact from these closures during the winter months.

“However, the upgrade to the facilities, giving flexibility to seat more visitors during the peak summer trading season and offer improved conference and event spaces, should significantly benefit the pier over the longer term.”

A recent dive and structural surveys, he said, did not indicate any need for exceptional repairs.

In his report to shareholders, Mr Johnson said: “This set of results includes the first full 12 months of trading by the Brighton Marine Palace and Pier Company, acquired by the Brighton Pier Group PLC towards the end of April 2016.

“Brighton Palace Pier is an iconic landmark and leisure attraction in Brighton, offering a wide variety of seaside entertainment including rides, amusement arcades, bars, a restaurant and other food and retail kiosks.

“Free of charge to enter, the pier provides a nostalgic, recreational environment, with spectacular views of Brighton and the English Channel.

“According to Visit Britain, it is the fifth most popular free visitor destination in the UK, drawing over 4.65 million visitors in 2016, and making it the UK’s most visited attraction outside of London.

“I believe this acquisition capitalised on a significant opportunity for the group to acquire the freehold of a valuable asset, while at the same time broadening its business base.

“The enlarged group has also benefited from the extensive experience of the pier’s management team, led by Anne Martin. 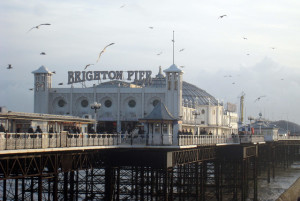 “Revenue generated has transformed  the existing business during the current financial year, providing substantial free cash flow for use within the enlarged group and enabling the possibility of funding further acquisitions across the leisure and entertainment sector, as and when opportunities arise.

“During the first financial year of ownership, the pier business has traded in line with our expectations.

“The pier continues to attract visitors to Brighton seafront in substantial numbers, many of whom come by rail.

“Reduced disruption to the services will benefit both the city of Brighton and the pier in the coming years if a final resolution to the dispute can be achieved.

“The group continues to make good progress rationalising the bars division together with driving operational and financial improvements across the estate.

“During the 52-week period, we have disposed of six marginal sites and since the year end we have let part of our freehold site in Derby to a new restaurant owner.”

Mr Johnson added: “I am delighted to report the appointment of Anne Martin in a newly created role as chief executive officer of the Brighton Pier Group, which took effect from the start of the new financial year on (Monday) 26 June.

“Anne has brought a wealth of experience to the group since she joined, following the acquisition of the Brighton Marine Palace and Pier Company.

“Under her leadership over the course of the last 11 years, the Brighton Palace Pier has continued to grow year on year.

“As the group purchases more businesses, her unique knowledge and experience will be invaluable in helping to evaluate, acquire and manage these new assets.”

The Brighton Pier Group’s annual report to shareholders said: “Since the end of the financial year, trading on the pier during August and September has been mixed and did not match the strong trading performance of financial year 2016, owing to rain and strong winds.

“The management team at the pier has shown itself adept at generating revenue when the sun shines and saving costs when possible.

“In September 2016, we reported on the new soft play trial in the Glitter Bar, the new takeaway fish and chip shop on the pier head and the launch of the new website.

“The success of the soft play trial gave us the confidence to launch the largest soft play area in Brighton, with the creation of ‘Palace Play’ in the Dome, totalling 231 square metres, with a capacity for 140 children.

“A new café has also opened in the Dome, providing an area for parents and friends to relax while their children play.

“Both facilities opened in March 2017, enabling us to increase the price of the children’s wristband and thus contributing positively to trading at the pier.

“Palace Play also has the advantage of offering a leisure space all year round and an activity for local Brighton families and guests to enjoy in the winter months.

“The new takeaway fish and chip shop opened in June 2016 and has been a notable success, repaying its investment by the end of the first summer of trading.

“The quick and easy train service into Brighton from London is a major benefit to all businesses in Brighton, as well as the wider local population, and while there have recently been some improvements in the service, a resolution to these disputes would be welcomed to allow it to return to full service.

“In December, we launched our first Christmas market on the pier. Incorporating 20 stalls, it provided an incentive to visit the pier during its winter season.

“The additional footfall created by the market benefited the restaurants, arcades and rides during what would otherwise be a quiet period.

“The plan next year is to develop the market further and consider whether there may be similar events that could be added to the pier’s calendar during the quieter off-peak season.

“This year has been no exception. The dive survey and annual survey were both completed, resulting in no additional maintenance needs other than the budgeted requirements and thereby allowing us to commence a number of new projects.

“The first of these involved the move and replacement of the Dolphin Derby, a game that is a big favourite on the pier but is now 25 years old.

“At the end of February, the brand new Dolphin Derby was installed in its new location next to the Wild River Ride.

“This move made way for the new i220 children’s ride (opened in March) and for the improvements planned for Horatio’s Bar this winter.

“The i220 will elevate visitor’s skywards, offering scenic views of the seafront. However, unlike its namesake, the i360, the new i220 ride will take visitors to a less-dizzying height of eight metres.

“Finally, on (Friday) 1 July 2016 we reported the plan to reclaim the Brighton Pier name, restoring the Palace back to its original title of Brighton Palace Pier.

“A competition was held to design the new sign for the pier and our chosen winner was Lucy Williams, a local Brighton resident.

“Her design creates an archway of the word ‘Brighton’ representative of the pier’s dome, with the remaining words ‘Palace Pier’ on the facade of the building. Work is under way to construct the first of these three new signs.”

“The group predominantly targets a customer base of sophisticated students midweek and stylish over 21s and professionals at the weekend.

“The division focuses on delivering added value to its customers through premium product ranges, high-quality music and entertainment and a commitment to exceptional service standards.

“The bars estate is nationwide, incorporating key university cities and towns that provide a vibrant night-time economy and the demographics to support premium bars.”

The company said that it had rationalised its bars division, which made a £2 million operating profit.

The lease to the Dirty Blonde, in East Street, Brighton, was surrendered last November at no cost, it said.

And it added that the lease for the neighbouring Lola Lo business was held in a separate company which was sold in March for a nominal sum.

The group was not, according to its accounts, facing any residual risk from the sale and the closure.