If it’s hard to imagine anything more embarrassing than dad dancing, imagine being a professional dancer on stage with your dad while he busts his moves.

Three professional dancers have taken their courage in their hands to do just that – and they’re staging a performance in Brighton this evening (Friday 27 October).

It must have taken quite a bit of courage on the part of their fathers too for a show that aims to reclaim dad dancing from the cynics.

And having held workshops in Brighton earlier this year, the cast will even be joined on stage by some local dads and their daughters and sons.

Dad Dancing can be seen at the Attenborough Centre for the Creative Arts on the Sussex University campus at Falmer.

South East Dance, which helped bring the show to Brighton, said: “Could anyone ever persuade you to take your dance moves to the stage?

“Meet three brave dads who agreed to dance with their daughters in a new show.

“Through a series of touching episodes, they explore father-child relationships with joyous contemporary choreography, humour and playful storytelling.

“Joined by a supporting cast of fathers, sons and daughters of all ages, they fearlessly slip and slide their way through their similarities and differences, hopes and regrets to a soundtrack including Beethoven, Whitney Houston and Pendulum. 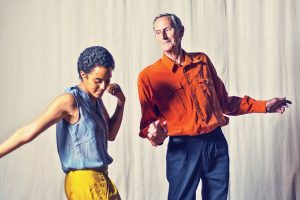 “Reclaiming ‘dad dancing’ from the cynics, this dynamic group of performers encourage us all to dance our own dance with joy.”