Parents spelt out their opposition today to proposals contained in the latest review of school catchment areas in Brighton and Hove.

Two petitions, each with more than a thousand signatures, were handed into a meeting of Brighton and Hove City Council at Hove Town Hall.

They related to changes affecting schools in Brighton, Hove and Portslade.

Handing in the first petition to the meeting of the full council, one of the parents Kevin O’Sullivan said: “This petition is presented on behalf of 1,456 signatories in the West Hove area who object to the changes proposed for the secondary schools catchment areas for 2019.

“Given that governors of Varndean, Stringer and Blatchington Mill have offered to accommodate more pupils during this temporary two-year surge in student numbers, I would ask the council to question why we need this catchment change process at all.

“The whole process seems an unnecessary burden on the council’s scarce resources.

“That said, we believe this proposal will have a detrimental effect on the children in the affected area for the following reasons

1. Removal of choice – Children in the affected area currently have a choice of two-non denominational schools (Hove Park and Blatchington Mill). The proposed change removes this choice and replaces it with a single school. Transitioning to secondary school is an anxious and stressful time for children, one which is significantly easier to manage when children have a sense of engagement in the selection process. Removing this choice removes this sense of engagement.

2. Splitting of friendship groups – No thought seems to have been given to the fact that children in the same year groups at the same schools who have had the same education and choices so far in their lives will now be treated differently due to the line on a map, creating inequality of educational choice. Dividing the children divides the community.

3. Long and arduous commute – The majority of those affected by the proposals would see their journeys double in distance. Children in the east end of the proposed catchment area will have a five-mile round trip. The walking and cycling route includes crossing several busy roads (A293 Hangleton Link, Locks Hill, Old Shoreham Road, Boundary Road level crossing) which makes it unsafe.

“The remaining option is the 1/1A bus route with just a single option each morning which will get the children to school on time.

“This will also cost between £290 and £360 per child (at current prices) – a significant addition to household bills.

“This long commute will limit the children’s ability to develop friendship groups with the majority of their peers who will live a lot closer to PACA, and this can only have a detrimental effect on the children.

“And this of course at odds with the councils school travel priorities.

“So, to be clear, the objection to these changes is not a judgment on any school in the Brighton and Hove area.

“It reflects the parents and guardians’ concerns with regards to the impact these changes will have on our children, eliminating choice, creating stress of splitting friendship groups at such a key time and the ongoing strain of such a long commute.

“And finally, the council is obliged to follow the School Admissions Code which states that catchments be ‘fair, clear and objective’.

“While it isn’t in the interest of any party that this becomes a legal matter we have been advised that the current proposals are some way from being ‘fair, clear and objective’ and the parents and guardians involved are prepared to commit financially towards a judicial review fund to ensure the best outcome for our children.” 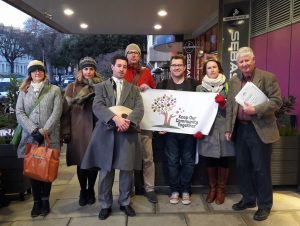 Another parent Ollie Tait also presented a petition and said: “This petition represents 1,368 signatories from the Elm Grove area.

“We the undersigned petition the council to abandon proposals to change existing catchment areas until the proposed Brighton and Hove Academy is confirmed.

“We believe they run counter to the following council policies

1. This council believes ‘transferring to secondary school should be a momentous and exciting time’.

2. This council encourages ‘sustainable travel and walking to school’. There are seven schools nearer than the proposed school – Longhill High. Walking or cycling will not be an option for children who will have no choice but to take the six-mile round trip by car or bus. We were told in our consultation that travelling for up to 75 minutes is deemed ‘reasonable’ – this would be on a good day. Longhill is a great school but how can children fulfil their true potential with up to a two hour daily commute? Out of school activities and new friends will be miles away.

3. This Council has an HMO (houses in multiple occupation) policy that ‘ensures the community’s wishes are brought to bear’. This has become a worrying and upsetting time for a small group of children faced with the prospect of splitting friendships at a crucial time of transition. We are close to the bus corridors for two universities with an estimated 28 per cent of properties already HMOs and growing – the highest in Brighton. These catchment proposals are already stopping new families moving here. This will dramatically change the character of the area and threaten the intake for its successful primary schools.

4. This council believes in ‘honesty about our service’. We have had to make freedom of information requests in an attempt to understand the selection of our area. Key decisions have been made at poorly attended meetings for which there are no minutes. Parents were told in our consultation that in the absence of robust data our area was selected on a ‘feeling’ and ‘anecdotal evidence’. Since then, the schools whose catchments are under review have revealed they were given just one day’s notice of the changes before they had a chance to discuss them. Add to all this the confusion around a new school which may never be built and it would all be laughable if the consequences weren’t so dire.

“However, Varndean, Stringer and Blatchington Mill have all offered to accommodate more pupils.

“The working group will tell you the figures don’t stack up but neither do theirs.

“Bad policymaking in the past means that all choices fail to provide catchments which catch.

“These are political decisions about how best to spread the difficulty but we as parents think leaving everything in place until the new school opens is the least worst option.

“Democratic services advised us to submit this petition to the committee rather than full council as you all would merely ‘ratify’ their recommendations. We urge you not to rubber stamp such damaging proposals.

“Parents are ready to commit their savings towards a judicial review fund – we have been advised that the current proposals fail the School Admissions Code that catchments be ‘fair, clear and objective’.”