Tennis players who use the courts in Hove Park are fighting the decision to resurface five of them for the sole use of footballers. 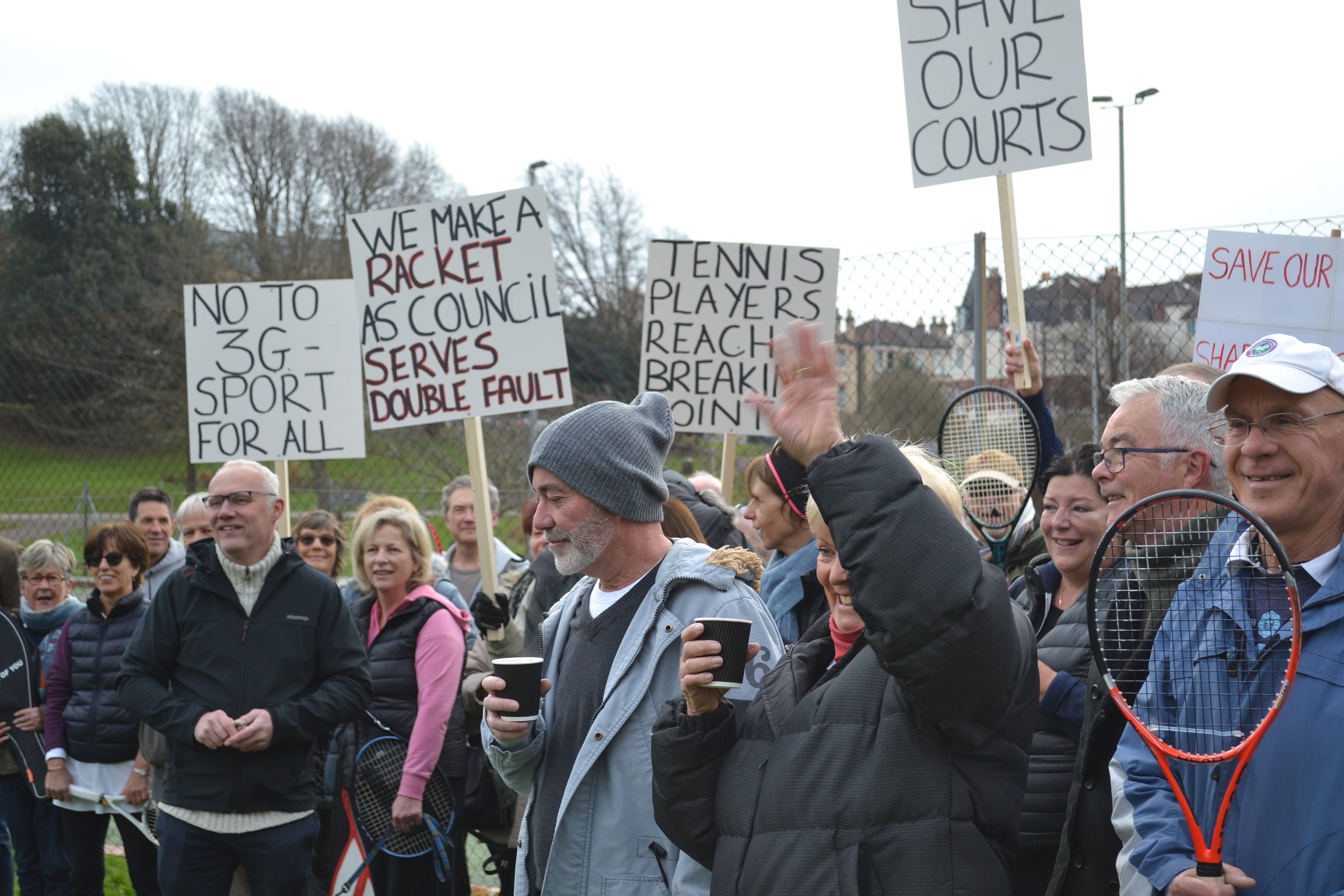 A demonstration was held at the courts earlier this month, and today a deputation is due to speak at a full council meeting at Hove Town Hall.

The courts are currently covered in artificial grass, and used by tennis players in the summer and footballers in the winter.

But the grass needs replacing, and Brighton and Hove City Council has decided to resurface them with recycled tyres – which is perfect for football, but useless for tennis.

It says it cannot simply replace the astro turf because the work is being paid for by Section 106 contributions from the Park House development, which can only be used for new projects – and a decision on how it will be used is needed within weeks before the agreement expires.

In a briefing shared with the tennis players, officers also point out that the footballers pay the council £10,950 a year to use the area, compared to the £2,150 paid by tennis players.

And it says it has been approached by a football charity, the Russell Martin Academy, which would be interested in operating the new surface.

The letter says: “Should the area continue to be run by Cityparks, the prospect of generating enough money to set aside a suitable sinking fund a minimum of £10,000, just for surface replacement, per year is a lot better with football than tennis.

“This figure is based on the 3G estimated cost so could be different for a tennis surface.

“Objections to the 3G surface raised by the public are all so far from tennis. If the 3G surface was to be stopped, tennis would not be an option for the reasons stated above, so we would need to rapidly find another suitable spend within Hove Park.”

Tennis player Neil Dickson of Hove Park Tennis Club said: “They made the decision behind closed doors and there was no consultation. We had no input into the decision at all and we feel that this decision which affects everybody should have gone through committee.

“There’s a wider issue of who managed tennis courts. Queens Park Tennis Club is set to take over the council courts there and we want to follow suit because we feel we have got no other option.

“The courts are in such a terrible state. They’ve only been resurfaced once in 27 years.

“Demand is really high in the summer. There’s us at Hove Park Tennis Club, Blaggs, Topcats, the Welbeck retired group and various coached and there’s a kids club which uses it at weekends. There’s always people waiting.

“The Section 106 agreement is worded so that the money can only be spent on a new facility, but not maintain or spend on a like for like project. But 106 money is spent in that way by other councils and it’s really down to the wording that’s chosen. We feel that the council is hiding behind this technicality.

“At Hove Rec, the replacement of the rugby pitches was classified as a new project because they put in a new sub base with drainage.”

“However, we are keenly aware that the artificial grass area has fallen into disrepair.

“Due to reductions in government funding and increased demand for council services we can no long afford to maintain the artificial grass area and guarantee its long-term future.

“We are therefore looking making a one-off investment in upgrading the surface into a 3G Artificial Grass Pitch in order to make the area a more attractive proposition for an external sports operator.

“Funding has been identified that could be used to support such a one-off programme of improvement work.

“This would come from financial contributions developers have made through the planning process for projects that should benefit and increase the outdoor sports offer for the local communities.

“In the short-term, based on advice from our external consultant we’re expecting the 3G resurfacing to cost around £165,000.

“There would be little or no financial advantage in opting for standard astro-turf instead as it would not be self-financing.

“Any replacement pitch is likely to be a similar capital cost as it isn’t a matter of simply putting a new layer of artificial turf on top of the existing area. The whole of the sand base would also have to be dug up and replaced.

“The long-term management and operation of the pitch has yet to be decided. However it is anticipated that a prospective leaseholder would manage bookings and ongoing maintenance, and would also pay an annual sum that we would set aside for 10-15 years’ time when the new surface has worn out to enable a replacement.”

Brighton man thanks Good Samaritans who helped him when he collapsed