An arsonist started a fire at the Brighton Centre, yards from where homeless people were staying inside the temporary winter night shelter.

The suspected firestarter has appeared in court charged with arson with intent to endanger life or being reckless as to whether life was endangered.

“There was no danger to anyone in the building at the time although everyone was evacuated as a precaution.

“There was no damage to the building.

“We can’t comment further at this time as the matter is part of on an ongoing court case.”

The night shelter has been open for a week and a half and can sleep up to 30 homeless men and women.

The council opened the temporary shelter having been petitioned by more than 4,000 people earlier this year.

Hove pensioner John Hadman set up the petition on the 38 Degrees website. It had been signed by 4,152 people by the time he presented it to the council in April.

It followed a Green motion to look at ways of making use of council buildings which won cross-party support in January.

The motion was proposed by Councillor Tom Druitt, seconded by his colleague Councillor David Gibson and supported unanimously.

But a cross-party working group had to overcome a series of hurdles to make use of empty space at the Brighton Centre.

The fire was started at the back of the Centre, in Russell Road, using tissue paper to set alight wooden crates on Saturday (16 December). 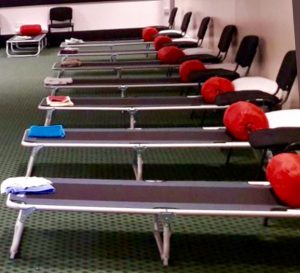 East Sussex Fire and Rescue Service also said that it was called out to two fires near each other in the small hours of Saturday.

Firefighters from Preston Circus were called to tackle a rubbish fire in Russell Road, Brighton, shortly before 3.40am and used two hose reels to put it out.

And just before 4am they were called to another fire yards away in West Street where they used buckets of water to put out another fire in the open.

He was remanded in custody by District Judge Tessa Szagun to appear at Lewes Crown Court on Monday 15 January.