When the RSPCA rescues more budgies than it knows what to do with, there’s only one thing to do … it tweets.

The charity rescued 359 budgerigars after being called to a house in Brighton when the owner went in to hospital. 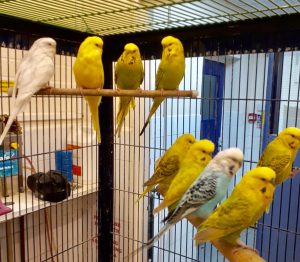 RSPCA inspector Liz Wheeler said: “We were expecting to find around 200 budgies but ended up removing 359.

“They were flying free around the semi-detached home so we had to use capture nets to safely catch them and remove them.

“When you entered the property there was a sea of yellow, green, blue and white, with birds perched everywhere. The noise from their tweeting and chirping was deafening.”

And now the RSPCA itself is tweeting as it looks for people to offer a home to the birds.

Some are at the animal charity’s Patcham base while others are at its premises in South Godstone, Surrey, and its Mallydams centre in Hastings.

Liz Wheeler said: “We’d like the budgies to go to new aviary homes where they can live with other budgies and have lots of space to fly and explore.”

RSPCA press officer Amy De-Keyzer tweeted a picture of the birds saying: “Does anyone want a budgie? @RSPCA_official has 359 looking for homes!”

Anyone interested in taking in one or more of the budgies should visit www.rspca.org.uk/findapet or contact the Patcham, South Godstone or Mallydams centres directly.