A Brighton burger boss who cooked up a treat for the homeless and lonely on Christmas Day has handed £2,000 to a local charity.

Trollburger owner Paul Clark made an appeal in advance for donations for his Christmas Day event.

With the proceeds, he opened his burger shack and provided a free lunch under Brighton Railway Station station on Christmas Day for anyone who was homeless, alone or hungry.

And he turned the event into a street party with music as well as dishing up “yuletide” burgers and chips – and cake.

More than 50 people, mainly homeless people, were fed and looked after. The leftover food was given to the “severe weather shelter” – also known as the SWEP shelter – at First Base, in Montpelier Place, Brighton.

Thanks to incredible local support, his appeal ended up with a £2,000 surplus which has been donated to First Base, the homeless day centre run by Brighton Housing Trust (BHT).

Mr Clark said: “The appeal spread like wildfire over social media and quickly raised over four times what was needed to fund the party.

“It also attracted additional help including Maria Aurora, from Brewdog Brighton, Rebecca Letchworth, from Honeycomb Cakes, and Louise Campbell, from Mestiza Filipina, who all provided assistance on the day.

“As promised in the appeal, any surplus donations would be donated to First Base to help people in need throughout the year.”

Deirdre O’Halloran, deputy manager of First Base Day Centre, said: “This is a fantastic initiative.

“Not only did people get together to enjoy Christmas, but the funds raised will help us run our day centre.

“It will help us to support homeless men and women move away from the streets. 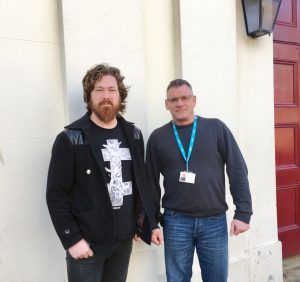 “We are extremely appreciative of local businesses, such as Trollburger, who make a huge difference to our work with those living on Brighton’s streets.”