Junior doctors had a point during their dispute with the government, Health Secretary Jeremy Hunt said in Brighton today (Thursday 1 February).

He acknowledged how much they cared and said that the dispute had led to more funding.

He hoped that, as a result, there wouldn’t be a shortfall in doctors and nurses in the years ahead.

Mr Hunt made the admission when he was answering a question from a junior doctor, Philip Rankin, at the Royal Sussex County Hospital.

He said that “money matters” but it wasn’t the only thing that mattered.

Scrapping nursing bursaries had led to fewer mature trainees, he said, but he made the decision to meet budget pressures.

He added that there were a record number of trainee nurses in their late teens.

He was invited on a “date” by accident and emergency consultant Rob Galloway – a weekend night shift with him in the A&E Department in Brighton.

Dr Galloway explained some of the positive changes that his colleagues had made there but called for more resources.

And he added that he was working two weekends on the trot – something which Mr Hunt had not previously seemed aware that consultants did.

The exchange came as Mr Hunt praised frontline NHS staff during his visit to two hospitals in Brighton and Hove today.

He spoke to trust staff and executives at the Sussex Education Centre there.

From Mill View he went to the Royal Sussex County Hospital where he was greeted by protesters from Sussex Defend the NHS, in Eastern Road, Brighton. Afterwards he went to hospitals in East Sussex. 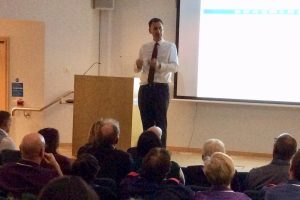 It included a pitch for more money – and Brighton and Sussex University Hospitals NHS Trust, which runs the Royal Sussex, has a running deficit of more than £60 million.

Chief executive Marianne Griffiths previously negotiated a breathing space to avoid the need for immediate radical cuts when she took up her post almost a year ago.

She and her board colleagues are believed to be concerned about the medium term prospects, having already identified cost savings of £40 million.

Dr Findlay told the Health Secretary – and dozens of doctors and nurses from the trust – about the steps being taken to improve patients’ experience when they are treated at the hospital.

He praised staff, particularly for their work over the past few months which have been exceptionally busy.

Mr Hunt said: “This is an incredibly busy time to be in the NHS front line.

“You are doing some really impressive things.” 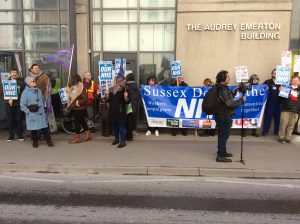 He mentioned the protesters outside, acknowledging their place in a democracy, and he admitted coming to his job as Health Secretary with no professional knowledge.

Mr Hunt described having to deal with the fallout from the Mid Staffs Crisis – the first crisis during his tenure – and how he was driven to tackle preventable harm.

He also shared some of the stories of those who had lost loved ones as a result of failures in care.

They included airline pilot Martin Bromley, who lost his wife in 2005 and who spoke about how a routine operation went wrong.

Mr Bromley urged bosses to design systems and imbue a culture that made it possible for staff to do the right thing and easier to make systems safer when things went wrong.

Mr Hunt praised Mrs Griffiths and the learning culture that she and her team had brought in at the neighbouring Western Sussex NHS Trust – and which is being introduced in Brighton.

He also addressed the question of money in relation to patient care and the difference made by good leadership.

And he urged greater openness and transparency – a duty of candour – even though it could cause some short-term embarrassment and staff worried about losing their job.

Staff and executives tended to respond to genuine information sharing without the need for targets, Mr Hunt said, because so many NHS professionals wanted to do their best.

He also praised the open reporting culture in the airline industry – the change from a blame culture to a learning culture – and the difference that it had made to passenger and crew safety.

He added: “I know this job is a political hot potato (and) you may be very pleased to know that I won’t be Health Secretary forever.”

But he was keen to leave a legacy of learning, openness and improving safety.

Mrs Griffiths said that she was “delighted to welcome the Health Secretary to our fabulous hospitals”.

She said: “It gave us an opportunity to share both our challenges and our successes to date – and our ambitions.”

“We need his support,” she added, alluding to the trust’s financial situation.