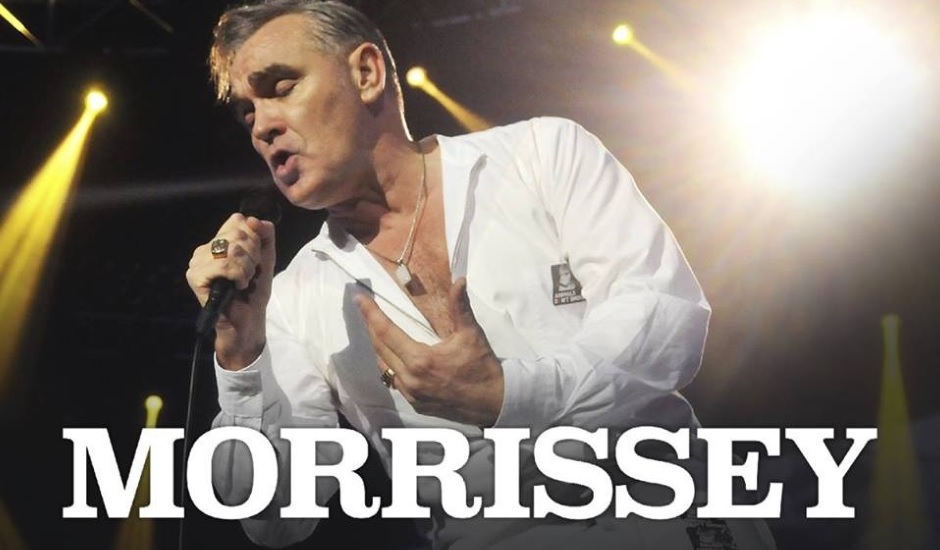 The last time I saw Morrissey live, he was storming off the stage at Finsbury Park on a sultry August afternoon back in 1992, having been struck by a bottle of something quite disgusting, whilst somewhat bizarrely supporting Madness on their comeback ‘Madstock’ gig. I have to say, I felt a bit cheated back then, so I was delighted that Brighton appeared on his list of tour dates this time around.. 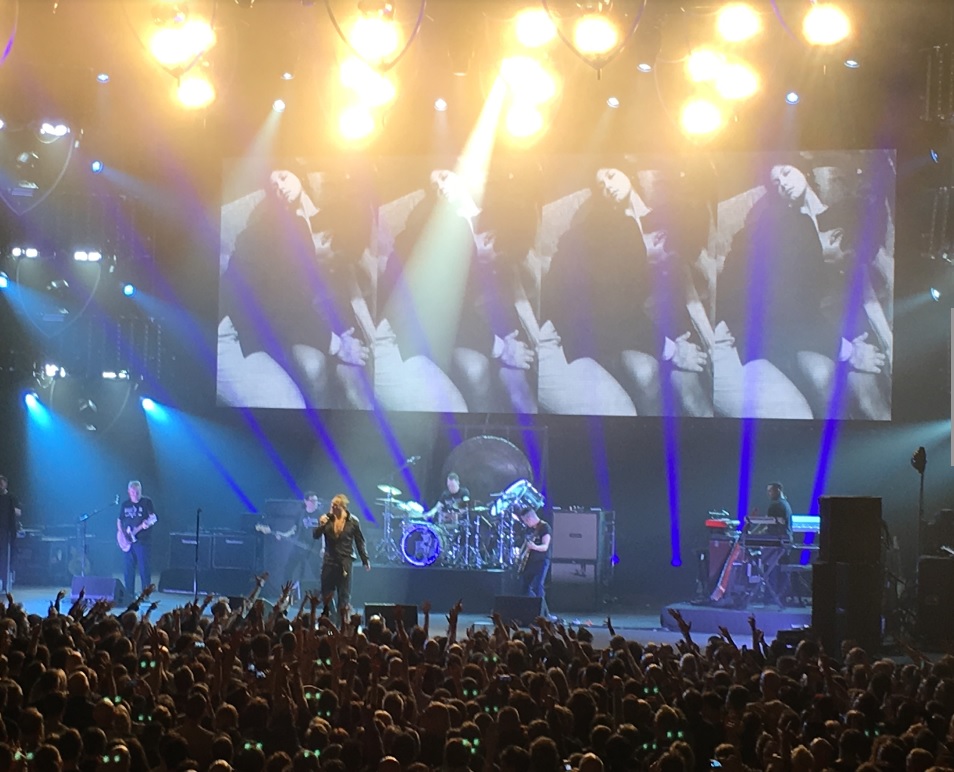 Tonight’s appearance was in support of his latest album ‘Low in High School’ which seems to have polarised opinions when it comes to critical appraisal. However, what struck me reading reviews of other gigs on this tour was the amount of criticism some of his lyrics had come in for. My point being that everyone KNOWS what you are going to get at a Morrissey gig and if you don’t like it, simply don’t come. 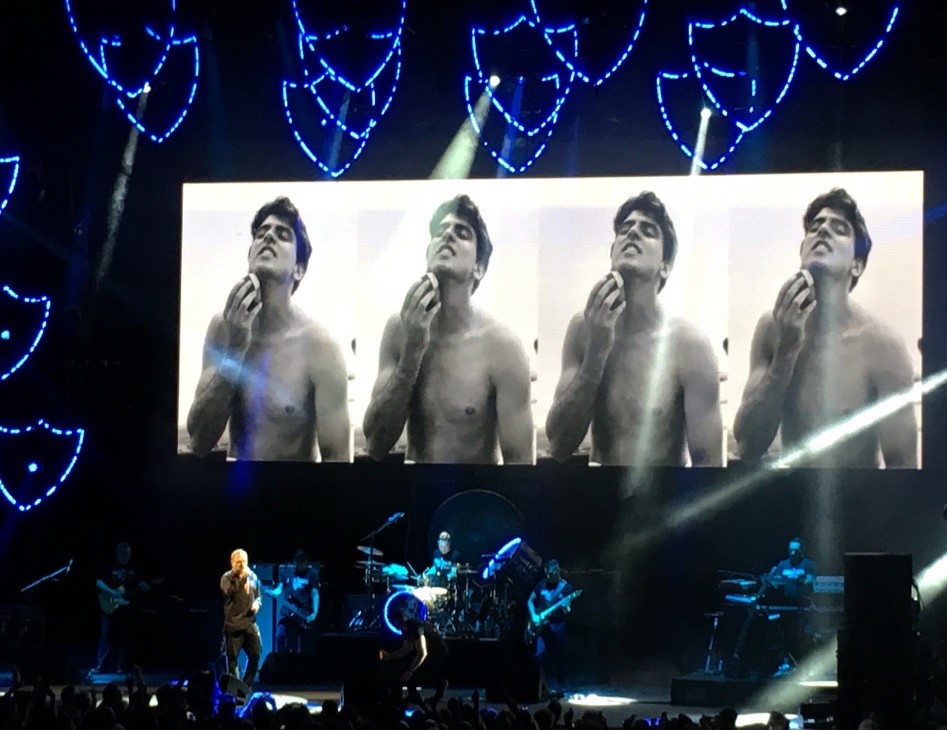 Unlike most other bands, Morrissey chose to eschew support, instead preferring a half hour, slightly-blurred ‘film’, essentially an evocative montage of mainly music clips which featured (amongst others) The Ramones, Paper Dolls, Human League, Germaine Greer, The Four Tops and Tatu’s decent 2003 Top-of-the-Pops performance of ‘How Soon Is Now’. I rather enjoyed it and it seemed to warm the heaving crowd up nicely. 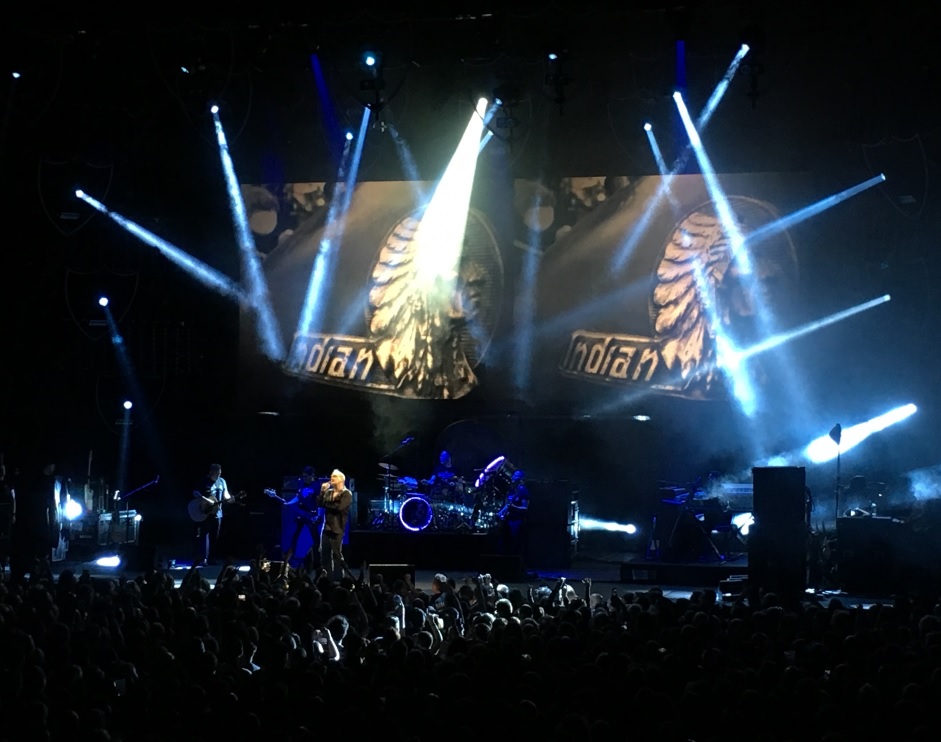 Lining up with a five-piece band, Mozza chose to launch the politically loaded, humorous and sometimes controversial set with a full-on rendition of ‘The Last of the International Playboys’ which sounds much better live. He strode around in front of his band confidently whipping the microphone lead like he was at a rodeo, the stage replete with neon shields providing a striking visual backdrop.

Highlights of the hour-and-a-half concert included a superb reprisal of his debut solo single ‘Suedehead’. ‘Every Day is Like Sunday’ had the crowd singing along and waving their mobile phones in the air. There was a superb cover rendition of the Pretenders hit ‘Back on the Chain Gang’ which went down really well. Of his newer material, I particularly enjoyed ‘Spent the Day In Bed’ and Jacky’s Only Happy When She’s Up on the Stage’. 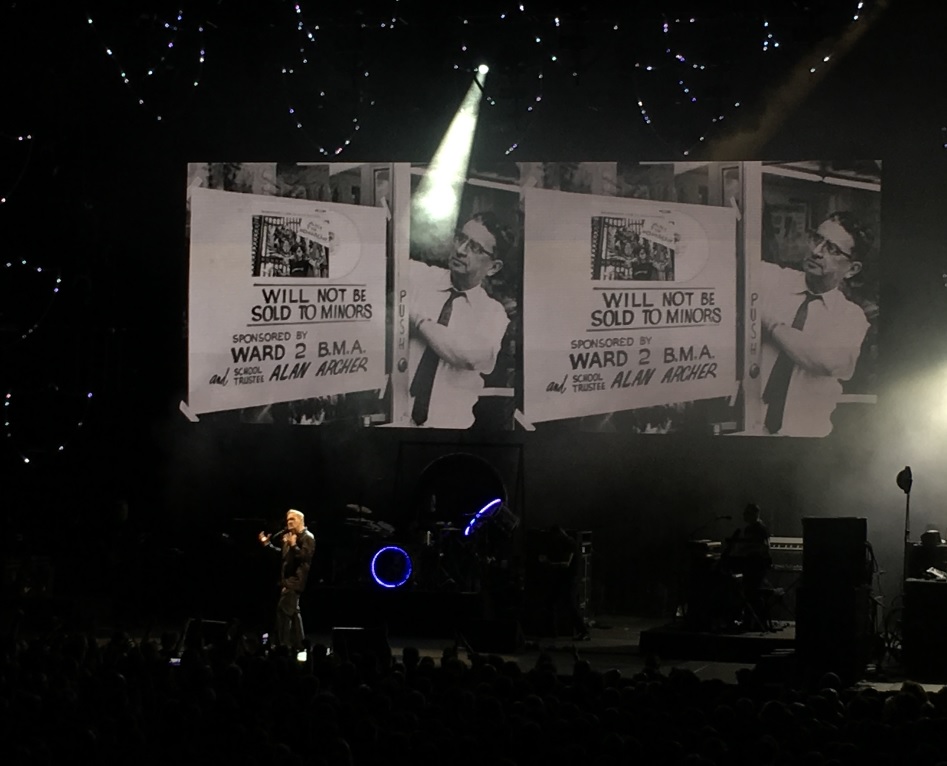 Morrissey demonstrated his dislike for all things anti-animal with ‘The Bullfighter Dies’, a song basking in the glory of the tables being turned, set against an array of gory images.

The only real time I found myself a little bit uncomfortable with the lyrics was on anti-war ‘I Bury the Living’, a long track which vilifies a squaddie and his mother when killed in the line of duty, almost accusing him of being naive and stupid. 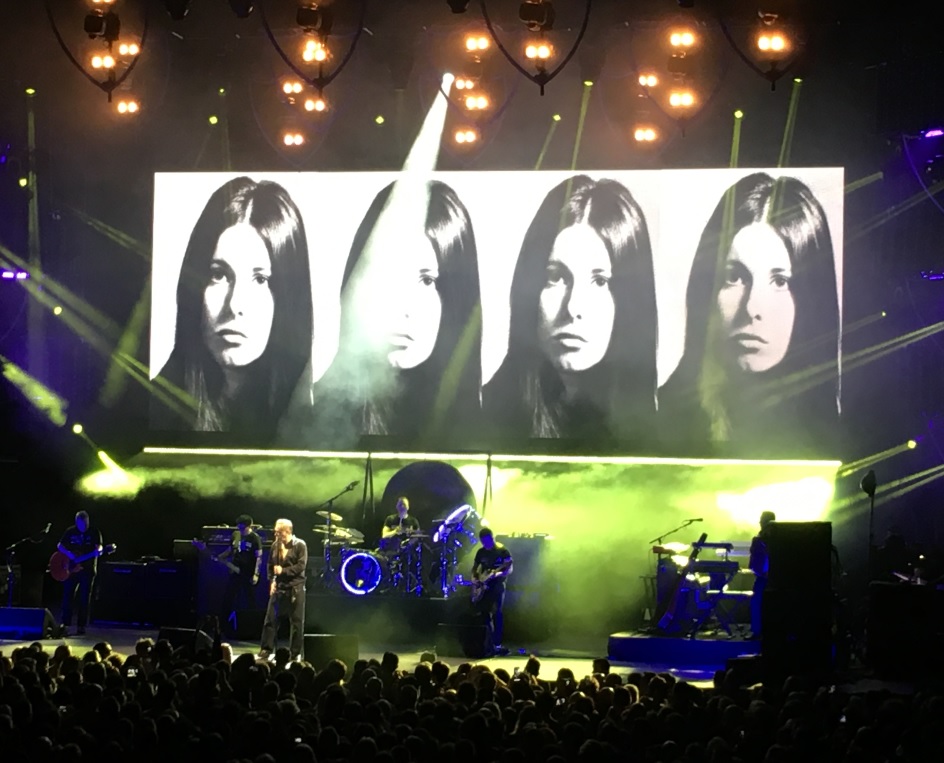 The Smiths ‘How Soon is Now?’ played near the end of the set is regarded by many as their greatest song and it’s potent intro whipped the crowd into a frenzy. Mozza demonstrated that he was on top form during this when he caught a plastic glass thrown from the crowd to a huge cheer from the audience.

He seemed very tactile and relaxed with his audience tonight, as witnessed during ‘Hold On To Your Friends’ which saw warm smiles smiles together with him reaching out and touching the hands of people at the front of the audience, he genuinely seemed to be enjoying himself. 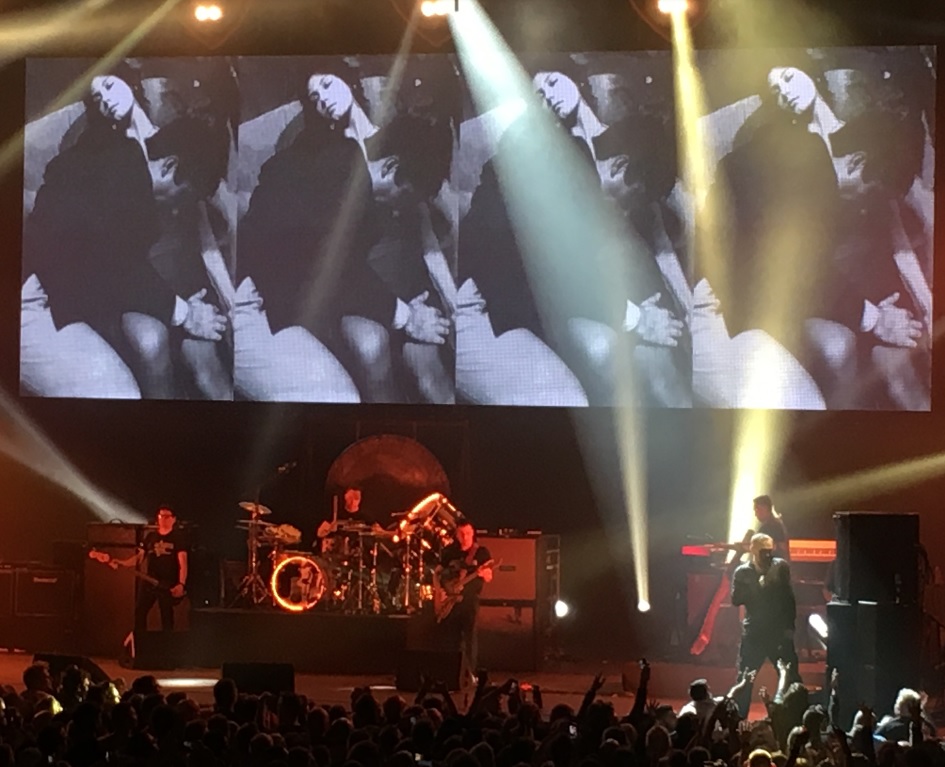 In my opinion, the best was undoubtedly saved for last with his one song encore, the magnificent ‘Irish Blood, English Heart’, a patriotic, regime-challenging belter of a track, all searing guitar with a great melody which builds to a crescendo. For the last Hurrah, Morrissey whipped off his freshly-changed shirt matador-style (ironically) and threw it into the crowd to provide the perfect end to the set.

Some of the audience echoed my views that it was disappointing he only played one Smiths track (he has played more at most of the other gigs on this tour) but in reality this was a minor gripe. Overall it was an excellent show from an excellent showman, and the fans went home content. 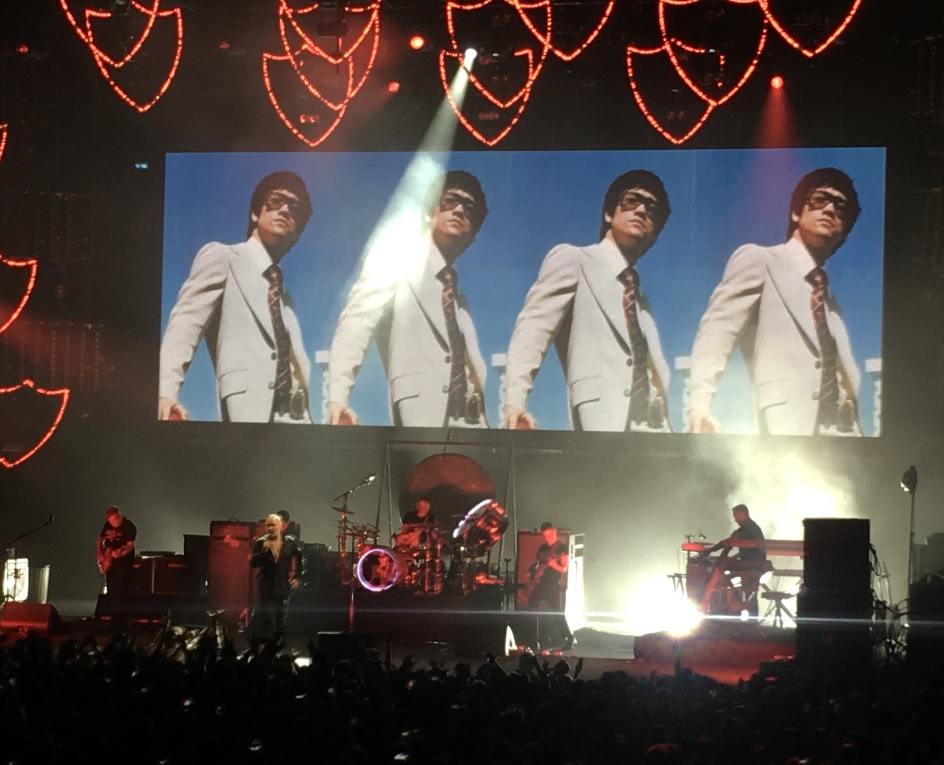 The Last of the Famous International Playboys, I Wish You Lonely, Suedehead, Jacky’s Only Happy When She’s Up On The Stage, My Love I’d Do Anything For You, The Bullfighter Dies, Munich Air Disaster 1958, When You Open Your Legs, World Peace is None of Your Business, Spent The Day In Bed, Back On The Chain Gang, I Bury The Living, If You Don’t Like Me Don’t Look At Me, Home Is A Question Mark, Jack The Ripper, Who Will Protect Us From The Police?, Hold Onto Your Friends, Every Day Is Like Sunday, How Soon Is Now?, All You Need Is Me (Encore) Irish Blood, English Heart. 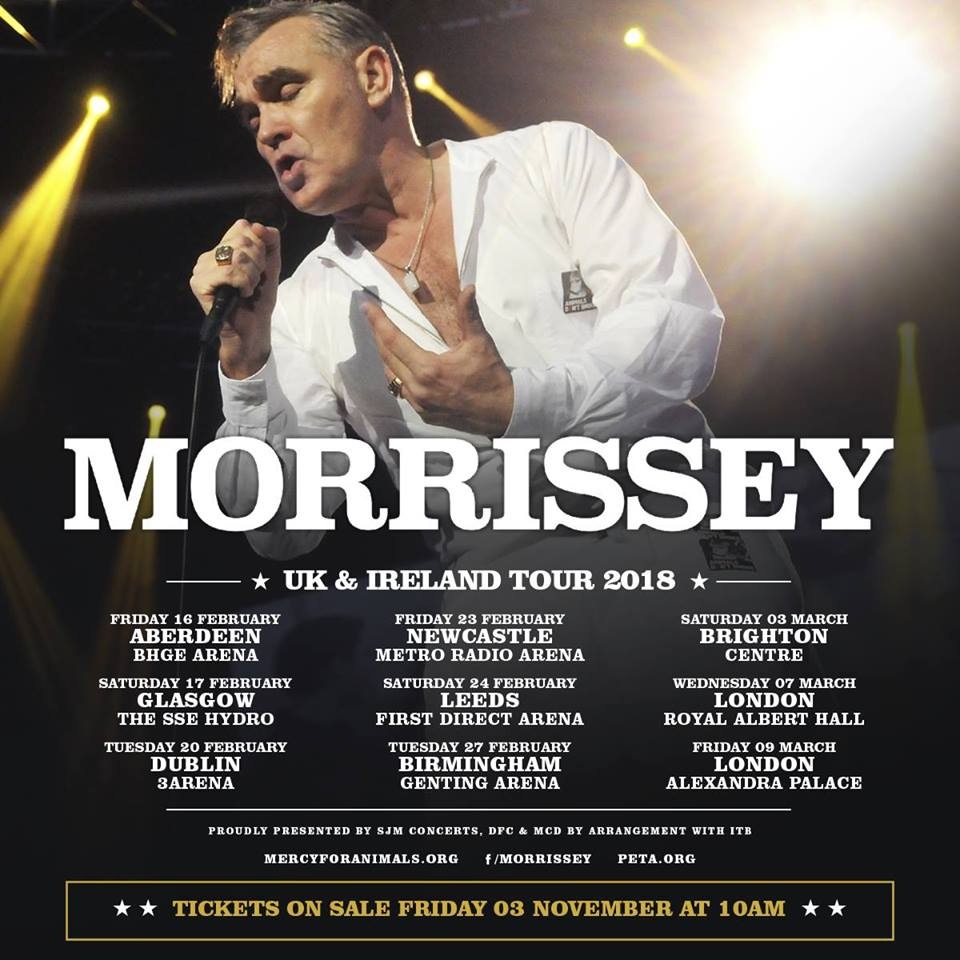