UPDATE: Thanks to everyone who showed their appreciation of our April fools story this morning, especially at the Argus.

Imitation is the sincerest form of flattery. 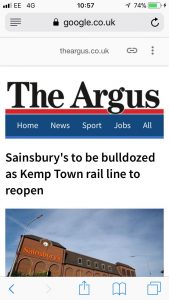 Here’s the original story – below – by Tim Hodges, who travelled on the line before it became fake news …

It has been signalled that the Kemp Town railway line is to reopen with a full announcement due next week. 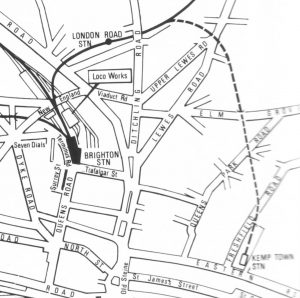 The route of the Kemp Town branch line

The branch line closed in June 1971. It ran from Brighton Station to what is now the Freshfield Road industrial estate.

Railway bosses have secretly drawn up plans to demolish Sainsbury’s in Lewes Road and rebuild the viaduct that used to run parallel to Freehold Terrace.

The line then enters a tunnel which starts at the junction of Bonchurch Road and Elm Grove and still runs under the Hanover area.

When the line opened in 1869 it took just 12 minutes to get from Brighton Station to Kemp Town. In 2018 it can take up to 25 minutes by number 7 bus to do the same journey.

Local celebrities Simon Fanshawe and Katie Price are rumoured to have been signed up as guards for the first journey. Although both are likely just to sell KitKats and hot drinks.

This article will update at noon.