A crowdfunding campaign has started to raise £100,000 towards the cost of restoring the Saltdean Lido. 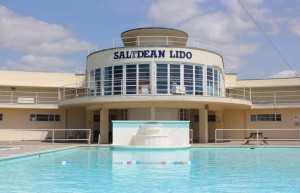 The organisers said that the money was needed to release £4.2 million of lottery funding towards the overall £6.8 million project cost.

The site’s freeholder, Brighton and Hove City Council, has agreed to put in £700,000 towards the restoration project which is being run by the Saltdean Lido Community Interest Company.

The CIC (community interest company) is now the leaseholder and last summer opened the historic pool for the first time in years.

Having brought the pool back into use, the next phase of the project is to renovate the main art deco building.

The council said: “Applications to the Heritage Lottery Fund are competitive.

“That means that the Lido application not only has to be great but better than all the other submissions.

“Matched funding is vital to the project which will cost £6.8 million in total.

“The 80 year-old art deco jewel reopened last year following seven years of painstaking work – but the clock is ticking to prove that a sustainable flow of community funding can be established to ensure that the £4.2 million of funding can be released.

“The aim is to raise just over £100,000 by (Friday) 1 June. The money will be used to rebuild the historic café in the main building.”

Sally Horrox, who chairs the Saltdean Lido CIC, said: “This is a toe in the water really to see whether the community will help us release phase two of the funding.

“It’s just a drop in the ocean in monetary terms but crucial to the future of the Lido.

“Rule changes at the Heritage Lottery Fund could mean that the entire project could be sunk if we don’t show that a sustainable flow of funding has been established.

“Receiving phase two of the funding is not a foregone conclusion now. We have to make a competitive pitch and prove that we are worthier recipients than other restoration schemes.

“The crowdfunding initiative is a vital part of this process.”

Nearly 35,000 people visited the newly restored 1930s pool after it reopened last May.