A request for a new premises licence for the Grosvenor Casino on Brighton seafront is to go before a Brighton and Hove City Council licencing panel on Tuesday (10 July).

The licence would permit casino bosses to play films, live and recorded music and to allow dancing all day, every day.

It would also allow the sale of alcohol from 10am to 6pm Monday to Saturday and noon to 6am on Sundays. But it has attracted objections.

An application in April for a certificate of lawfulness for the neighbouring Haunt night club was withdrawn by the owners on Thursday 31 May.

Plans to convert the venue into a casino were refused on Friday 18 May, on the ground that the city would lose a live music venue.

However, in an effort to overcome the council’s original objection, the Haunt is moving into the former Dirty Blonde restaurant within the same complex.

A new application to convert the Haunt into a casino was submitted on Wednesday 13 June.

In its report the company’s planning consultant Barton Willmore wrote: “This unit has been vacant for approximately two years.

“Its occupation by the Haunt will therefore retain the ‘live music venue’ for the benefit of the city.

“The head of planning at Brighton and Hove City Council has been made aware of this relocation designed to restrict the amount of licensable premises in the city centre and promote good practices to minimise the adverse impact from alcohol use.”

In a report going before the panel, licensing officer Mark Savage-Brookes said: “The Licensing Team have concerns that the application could have a negative impact on the licensing objectives of prevention of crime and disorder and public nuisance, due to the premises’ location within the ‘cumulative impact area’.”

In the cumulative impact area, which covers much of the city centre, the number of venues and outlets selling alcohol is restricted. 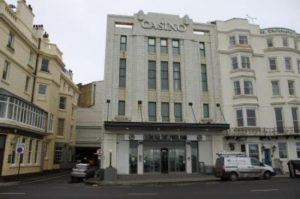 After pointing out the noise of rehearsals, loading and fans hanging around Brills Lane, she added: “This is tolerable currently, because the noise very seldom continues after 10pm. It would become intolerable if the premises was to have a 24-hour licence.”

Sussex Police has also asked the authority to refuse permission saying no good reasons were given in relation to the cumulative impact zone or any information about staff training.

The licensing panel meets to discuss the application at Hove Town Hall at 1pm on Tuesday.