Bruce on the Boundary – A new England star

Here’s a heart-warming story which has nothing to do with Sussex Sharks’ strong start to the Vitality T20 Blast campaign.

Step forward Liam O’Brien, a 19-year-old who has been the big find by England’s physical disability team during the recent series against Pakistan and Bangladesh.

Although it couldn’t deny Pakistan victory it was a wonderful moment for the youngster who plays club cricket for Preston Nomads.

It was wonderful too for his coach Ian Salisbury, the former Sussex and England leg-spinner who has been in charge of the physical disability team for the past two years.

“I presented him with his cap and that was a huge honour for me to do that because I’ve been on a bit of a journey with him,” reflected Salisbury, whose coaching team includes another former Sussex player in fast bowler James Kirtley.

Salisbury said: “I heard about this kid who’d played for Sussex at age group levels, under-12s, 13s, 14s, 15s, but was then having his heart broken not getting into the Academy because of a lack of a mobility.

“Then they found out he had bilateral talipes – so he’s also got to cope with being told he’s got a disability. But then someone suggested to him disabled cricket.

“I met him at Hove, watched him smashing our best bowlers around in a net and thought ‘this kid will do for me.’

“And to be able to sit down with him, get to know him, see him grow over the last 12 months to be probably the stand-out performer for us in this tournament – he’s taken fantastic catches, he’s scored runs at the hardest times for us, taken the most wickets. To watch a 19-year-old do that, in front of his family every single day has been brilliant.”

The tri-series was held on grounds in the Midlands culminating in a finale when England played a select team from the other two nations before Worcestershire’s Vitality Blast game against Northamptonshire at New Road.

“This week was about the visibility of disability cricket,” said Salisbury. 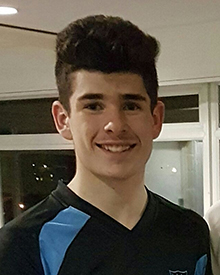 “Here we are at one of the great county grounds, before a big Friday night game in the Vitality Blast – and we’ve shown a few more people what the ECB are doing with disability cricket, and the special people involved.”

For Ian Martin, the ECB’s head of disability cricket, there was pride, both at having hosted the physical disability teams of Bangladesh and Pakistan – and in the quality of cricket displayed.

“For me it’s been about the standard of cricket, and how all three teams have developed since the last time they played in Dubai in 2016,” said Martin. “The comments I’ve had from people who’ve watched this not really knowing what to expect have been really positive.”