A surge in the number of abandoned bicycles left locked to Brighton’s bike racks has made parking harder for cyclists.

Green councillor Alex Phillips highlighted the problem when she was unable to park her bike outside the Brighton Centre.

“The problem seems much worse in the summer.”

Fellow cyclist Tony Janio, leader of the Conservative opposition on Brighton and Hove City Council, said that he was also aware of the problem.

Councillor Janio said: “When I cycled into town for my morning yoga near to Brighton Town Hall at 7.30am, many of the cycle racks were already half full.

“Some were taken by abandoned bikes and some by local residents who have nowhere else to park them overnight. We should be thinking about this.

“This all defeats the whole purpose, of course, as having no spaces deters cycling.”

He described a “surge” of abandoned bikes in September and October when thousands of university students return.

Councillor Janio added: “The problem is keeping them cycling when the cold weather comes along.

“Once they are ‘lost’ they remain lost.” 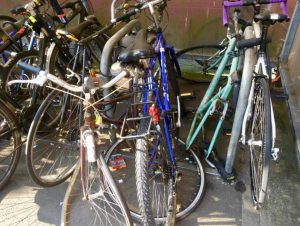 In the first six months of this year the council’s enforcement team collected 160 abandoned bikes.

Once an abandoned bike is reported to the council, the enforcement team fixes a “14-day notice” to it.

When this expires, the team aims to pick it up within two to three weeks.

However, according to an enforcement officer, this can take longer, depending on whether anyone from Cityclean is available.

He said: “We usually get an upturn in reports and removals around October/November.

“This ties in with students leaving the bikes from around the end of June to students returning around mid-September.

“The abandoned bikes have had the summer to sit in slightly dryer weather during which time they sometimes go unnoticed.

“Also once the students return there are a lot of bikes outside student accommodation that get noticed by the new influx of students.”