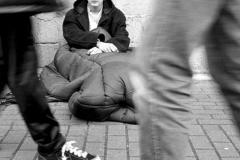 A project to place homeless people with complex needs straight into permanent housing is being expanded.

Another ten homes are being sought for Brighton and Hove City Council’s Housing First project, where people leave the streets straight into their own home with personalised support.

Of the rough sleepers currently on the streets of Brighton and Hove, the council has identified 46 – or 26% – as being suitable to benefit from the project.

The council currently houses 10 people in a mixture of supported and social housing under the scheme, and it now hopes to identify another 10 homes to place homeless people in.

The idea behind the project is to skip supported and temporary accommodation as it has not been successful for some people in the past because it is shared.

Temporary accommodation was described in a report as “unsettling” as most of the time is taken up by council officers preparing people for a permanent home.

Council commissioning and performance manager Sue Forrest explained why the project is working at the Health and Wellbeing Board on Tuesday 11 September.

In her presentation she explained how people with multiple needs are often unsuccessful moving to housing after failing to meet conditions.

Homeless people moving from rough sleeping into housing start off in emergency accommodation or a hostel, then taking a step into transitional housing before finding a permanent home.

She said: “In the traditional [staircase] model people often fall out of the system.

“Housing First moves them away from being homeless.”

She added: “For Housing First clients it is more than accommodation, it is identity.

“They reconnect with friends and family.”

Three case studies presented to the committee showed people who had previous issues with anti-social behaviour and addiction were able to turn their lives around.

A comment shared by one of the people on Housing First said: “That front door, to me, gives me an identity.

Funding for Housing First is committed until 2020. The council has bid for another £101,955 from the government to expand it for one year.

As it is a long-term scheme, money to keep the 20 people supported is needed from 2020 onwards.

Green Councillor Dick Page: “It says 26% or 46 people could benefit from it and we’re saying another eight or ten [homes] at the most, but I realise resources are an issue.

“Support is being bid for and this is all about the support.

“It is a risk but it is important to take a risk and invest in the support at an early stage.”

Councillor Page called for more ambition with the project but said he appreciated there were financial constraints.

“I think it meets the need of some very complex and vulnerable people in the city.

“Ongoing support is vital to it and this ensures it will be sustained in the long term for as long as it takes.”