Jurors in the trial of a man accused of murdering two nine-year-old girls have walked past a poignant memorial near the spot where they died 32 years ago.

A hawthorn tree decked in pink flowers, beads and crystals lies yards from the woodland den on the South Downs where Karen Hadaway and Nicola Fellows were strangled and sexually assaulted on the evening of October 9 1986.

Large pink balloons in the shape of 32 had been placed beside the memorial to mark the most recent anniversary.

Two small teddy bears had been placed side by side next to a plaque dedicated to the young victims.

The memorial serves as a permanent reminder of the lost children who, if they had lived, would now be in their forties.

Jurors travelled from the Old Bailey to Wild Park on the outskirts of Brighton to retrace the girls’ final steps, just over a week after the anniversary of their deaths.

They arrived in a coach with an escort of two police outriders on motorbikes.

Despite warnings to prepare for rainy weather, they were greeted on the south coast by a crisp, sunny autumn day.

They walked in sombre silence past the memorial tree, the colourful tributes glinting in the sun.

The trial of convicted sex attacker Russell Bishop follows a long-running murder investigation by Sussex Police, who have never closed the case.

Bishop, who was 20 at the time, is being tried for a second time for the murders after the Court of Appeal quashed his earlier acquittal in light of new evidence found as a result of advances in DNA testing.

Jurors were accompanied on the site visit by trial judge Mr Justice Sweeney, court staff and lawyers in the case, who had dispensed with their formal robes and wigs in favour of suits and jackets. 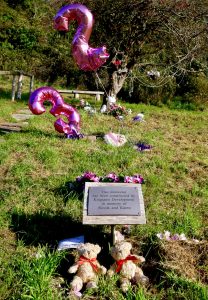 Before leaving London, the judge advised jurors to bring “sensible walking shoes”, wet weather clothes and a packed lunch for their day out.

He said: “Mr Bishop has chosen not to attend the view. That’s a sensible choice by him and you will not hold it against him in any way.”

The jurors had been told that they would pass the long-established memorial to the girls but would not stop to look at it.

The judge said that was because it was not relevant to the case but stressed it was no mark of “disrespect” to the young victims.

Police were on hand to guard against unwitting advances by dog walkers during the trip, which was expected to go on until about 3pm.

The trial has heard that Nicola and Karen went missing while out together in Wild Park after school.

They were seen playing in a large tree and outside a fish and chip shop shortly before they disappeared, the court has been told.

Bishop was also allegedly in the area that afternoon and walked home past Moulsecoomb library and railway station. 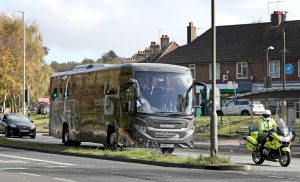 It is claimed he discarded a light blue Pinto sweater by a footpath which later allegedly linked him to the murders by DNA.

The girls were found dead on Friday 10 October 1986 after a search by police and volunteers – including Bishop and his dog Misty.

They were discovered huddled together as if asleep in a wooded den in the park, near steps known as Jacob’s Ladder.

Wearing a flat cap and jacket, prosecutor Brian Altman QC pointed out the steps as the jurors were escorted up to a pavilion in the park for the start of their tour of the site.

Three years after he was cleared of the murders, Bishop was convicted of the kidnap, indecent assault and attempted murder of another girl, aged seven.

The jury stopped at the pavilion, where an elderly rambler was swiftly diverted away by a police officer. 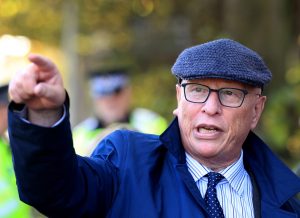 Mr Altman pointed out the now overgrown grass bank leading into the woods where the girls’ bodies were found.

“Behind the pavilion is the grass bank, now overgrown, and the steep slope bank leading Into the woods.

“And it was above this spot that the girls were found dead on Friday October 10 1986 up there in that sort of area.”

The crime scene has been described in court as a den in a hollowed out area within the undergrowth surrounded by boughs and branches forming a roof.

A police officer had to crawl through bracken to reach the dead girls, who looked to be sleeping, with their hands close together, among ivy.

The jury has already seen graphic photographs of Karen lying across Nicola with her head in her lap inside the den.

Jurors were then taken to see a large bush with red berries on it, the location of one of the last sightings of the girls.

Mr Altman said: “This is the tree where the girls were seen playing.”

A park keeper at the time told them to be careful and not hurt themselves as they played, jurors have heard.

He also reported seeing Bishop in the vicinity around the same time, the court has previously been told.

Mr Altman highlighted the fish and chip shop across the road, where the girls were spotted standing with a chip bag.

It was called Seafare in the 1980s but has since been renamed Gulls.

The gathering then walked on to a subway under Lewes Road.

From there, Mr Altman pointed out the street where both girls lived – Newick Road.

Each location took a matter of minutes to walk to, as officers quietly ushered away members of the public behind police cordons.

The jury went on to follow Bishop’s route home on the night of the murders.

Mr Altman stopped outside an old police box – now a car wash with a sign advertising “banging burgers” – and public toilets next door which have been converted into a tyre shop.

The jury was then taken on a walk along a footpath behind Moulsecoomb railway station.

On the way, the jury examined the place Bishop claimed he fell in dog mess. 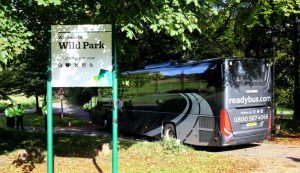 Mr Altman also showed them an area of rough ground strewn with old bottles and plastic rubbish where Bishop allegedly dumped his sweatshirt.

The patch of ground lay behind a high fence by the station platform.

On the other side of the footpath was an electricity sub station.

The whole site visit took two and a half hours.