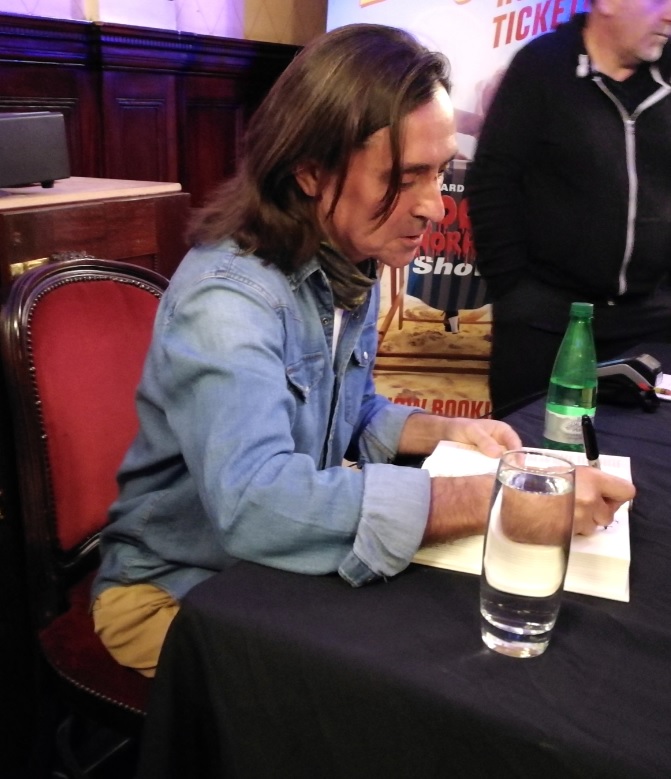 Neil Oliver signing copies of his new book ‘The Story of the British Isles in 100 Places’ at the Theatre Royal, Brighton 28.10.18 (pic Nick Linazasoro)

It’s been such a long time since I last ventured inside the 200 year old Theatre Royal located on New Road, Brighton. My last visit was an all encompassing affair, as we were lucky to have secured ourselves on one of the backstage tours of this historic grade II listed building. I would urge anyone that is interested in the history of Brighton to get themselves booked onto a Heritage Open Weekend tour.

We were here tonight (Sunday 28th October 2018) as I am particularly fond of the BBC tv’s documentary series ‘Coast’. I have enjoyed watching the ten seasons since 2005. They have covered a large chunk of the outline of the British Isles and beyond. The lead presenter on several of these series is 51 year old Scot Neil Oliver. 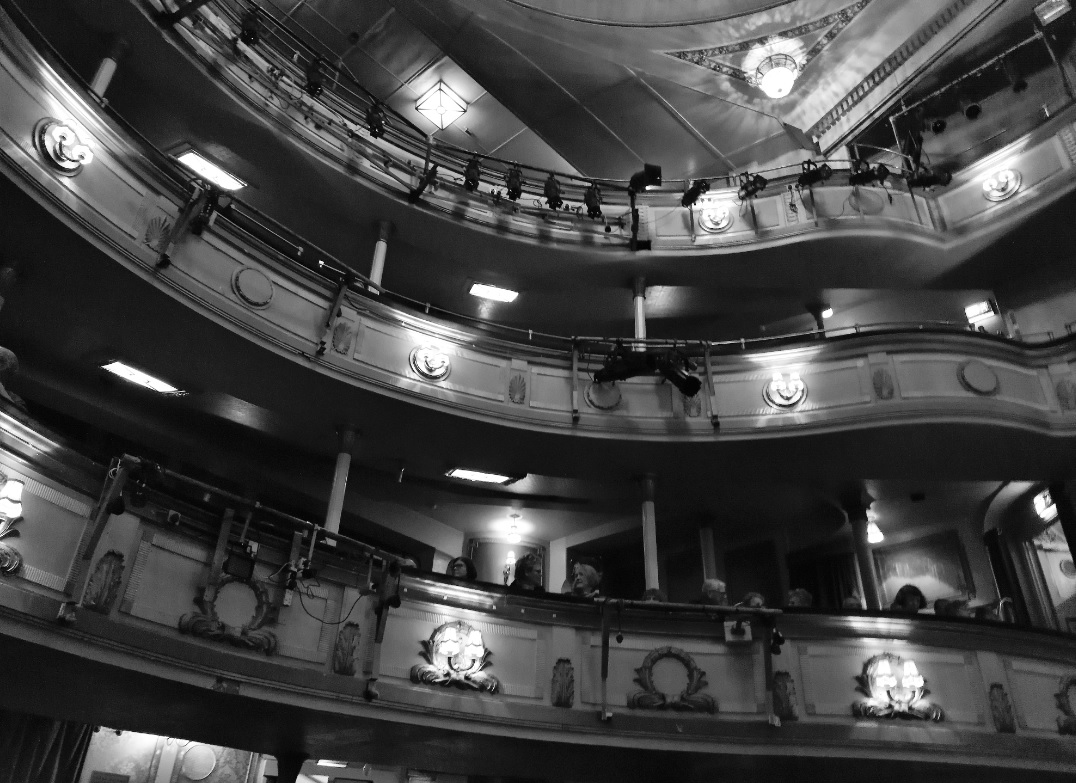 Renfrewshire born Oliver is not only a presenter and journalist, but also an author, an archaeologist, a conservationist, he is a patron of the Association of Lighthouse Keepers and in 2017 he was appointed president of the National Trust for Scotland.

It’s fair to say that Oliver is quite a bright spark as he has obtained an MA in archaeology at the University of Glasgow.

Tonight inside the packed Theatre Royal, Oliver put his vast knowledge to the test as he was sharing his love of the British Isles that was rekindled during the filming of the ‘Coast’ series. Neil commented that he “fell in love all over again with the British Isles. From north to south, east to west it cradles astonishing beauty. The human story here is a million years old and counting.” 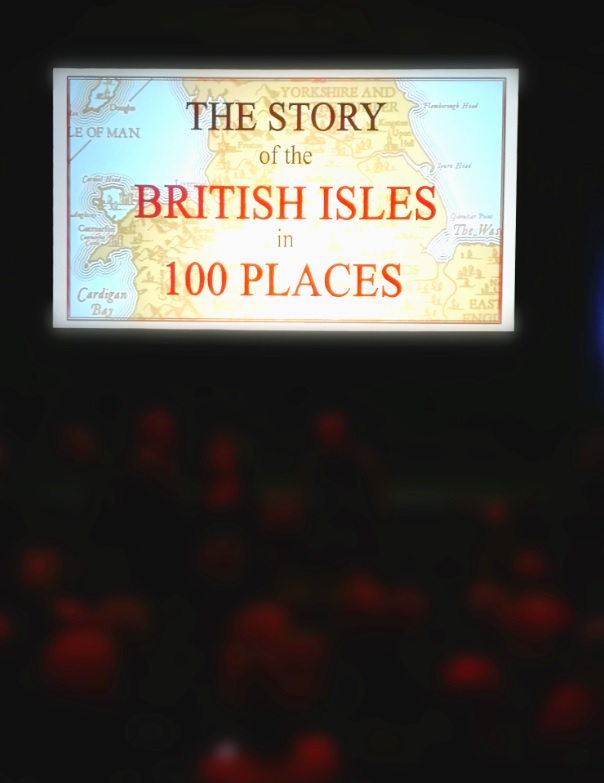 Photo taken of the stage prior to Neil Oliver’s lecture at the Theatre Royal, Brighton (pic Nick Linazasoro)

The title of this evenings ‘lecture’ is ‘The Story of the British Isles in 100 Places’ and it was audiences opportunity to share Oliver’s enthusiasm and unique perspective of British history, which as you would expect was delivered in his own inimitable warm Scottish style.

‘The Story of the British Isles in 100 Places’ is also the title of his new book. It’s certainly not a little light reading as it comes in at an impressive 448 pages! It’s rammed with thousands of interesting facts about our loved and cherished land. The book is the basis for the whistlestop 100 places tour that the Brighton audience were treated to tonight. 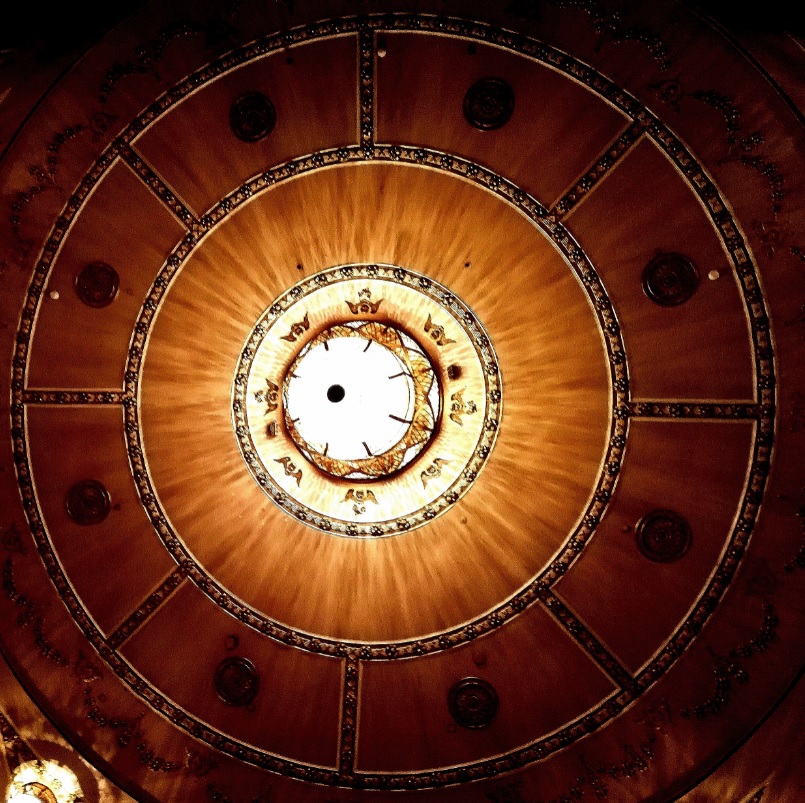 On the Theatre Royal stage it was just Oliver with a laser pen and a clicker for the interactive display on the large screen behind him – Nothing fancy for any distractions.

Oliver was sporting the now customary David Attenborough look in his attire of blue shirt and light brown trousers and was very impressive with his delivery of the facts of his 100 places. He barely got a word wrong all night. I was watching him, thinking how on earth can he remember this encyclopedic knowledge? Has he got a photographic memory or has he practiced it 100 times or has he got a secret earpiece hidden in amongst his trademark flowing locks? In the end I came to the conclusion that he just knows it because of his vast knowledge on the subject.

We were not restricted to just coastal areas during our tour, we were transported the length and breath of the isles, however, I did note that sadly, there wasn’t a single entry on Sussex!

Neil initially talked about where we have come from down the annals of time and that we are supposedly connected to people in history by only six handshakes if we had chosen the correct line. He recounted his early childhood and how special that the British Isles is to him. He then began his list of chosen places, starting at number one. 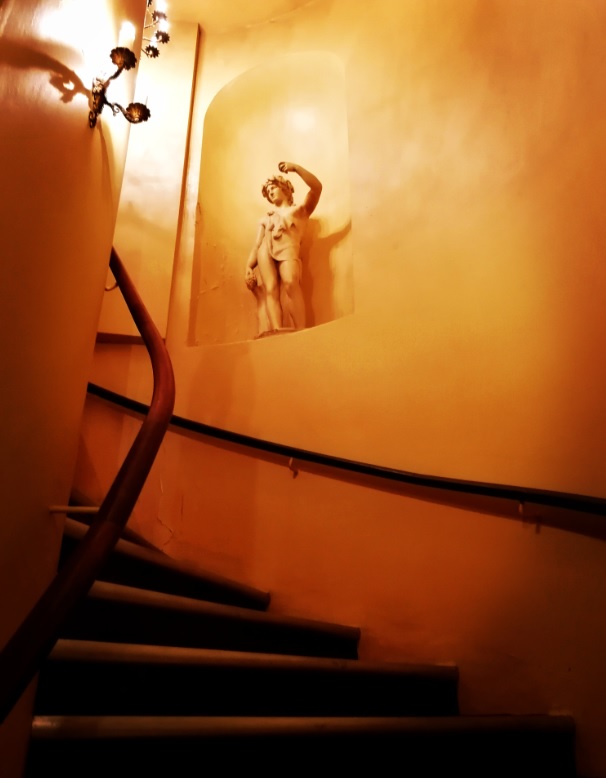 We went from Happisburgh in Norfolk, to Goat’s Hole Cave with the red ‘lady’ of Paviland to the Creswell Crags on Nottinghamshire/Derbyshire border to the Montrose Basin in Angus and so on until we reached number thirty-one. It was time for the intelude and for Neil to give his voice a rest for 20 minutes.

After the break, he continued counting up from 31 all the way to 100. It was a mammoth task and he held everyone’s attention, as you would expect him to be able to do. It was a truly fascinating evening where myself and my son learned quite a number of fascinating things.

The only surprise on the night was the age range of the audience, which was mainly of a more mature nature than I had anticipated, as I had presumed that there would be a representation of all ages, but tonight this was not the case.

After the ‘lecture’ had concluded, Oliver hot-footed it to the foyer where he was willingly signing copies of his book to the large queue of takers that had formed in order to snap up their souvenir of such a fantastic evening.

Sadly, for obvious reasons, photography was not allowed during the ‘lecture’ and so I took the opportunity to take a few shots of the wonderful building and a few shots before and after the performance. 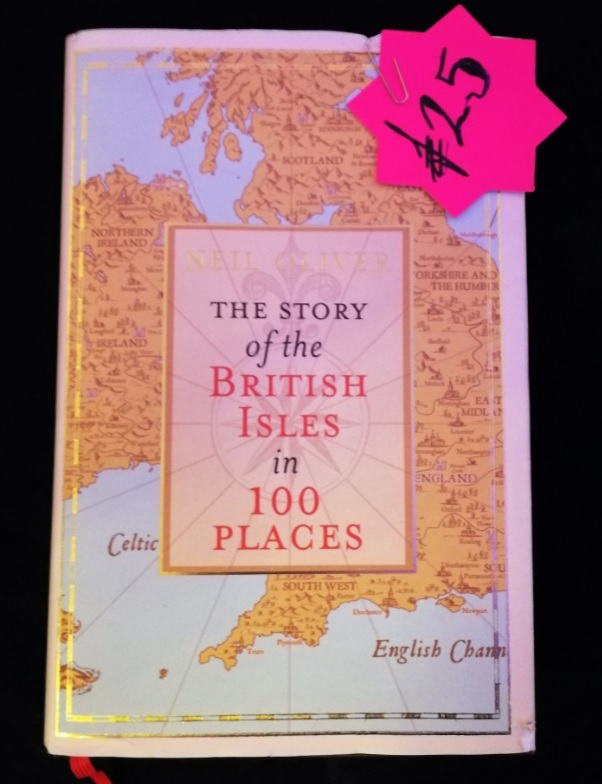