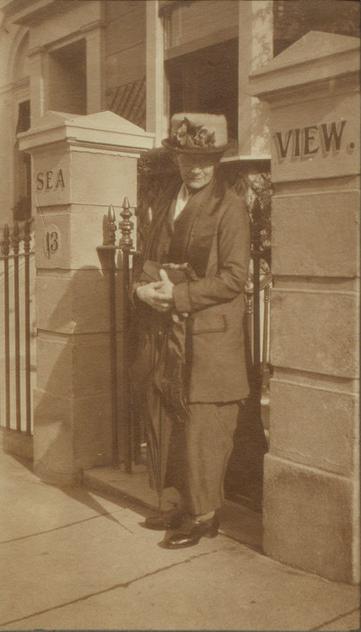 Minnie Turner by her Sea View guesthouse, the hub of Brighton’s suffragette activism

A new display at Brighton Museum and Art Gallery and the unveiling of a blue plaque, will help to mark the 100th anniversary of the Suffrage Movement in Brighton and Hove.

Staff at Brighton Museum have created a display which commemorates Brighton & Hove’s suffrage heritage. Located on the ground floor of Brighton Museum & Art Gallery,’ the Votes for Women display will feature suffrage objects from the city’s collections.

A blue plaque to commemorate Minnie Turner is to be installed in Victoria Road on November 18.

The plaque is the first of four being organised by Brighton and Hove Commemorative Plaque Panel in partnership with the council’s tourism unit Visit Brighton, in response to a campaign by the Women’s History Group, to honour the Brighton & Hove suffragettes who campaigned for women to have the right to vote in the City.

The other plaques proposed are on the Brighton homes of two other prominent suffragettes, Clementina Black and Elizabeth Robins, and another close to the North Street quadrant where the headquarters for one of the first Women’s Social and Political Union Branches in the country was located.

The 100th anniversary has also been marked by Brighton Dome being officially recognised as one of 41 buildings across England that were at the centre of suffragette action.

The sites, which include Westminster Abbey, Epsom Racecourse, and Manchester’s Free Trade Hall, have been updated on the National Heritage List for England – which previously carried no record of their links to the movement.

The Dome was a centre of activity for the Brighton Members of the WSPU and organised public meetings where suffragette leaders Emmeline and Christabel Pankhurst and others spoke, as well as disrupting political meetings as part of the suffrage campaign.

In November 1907, around 20 women were violently ejected from the building during protests at a meeting by Education Minister Reginald McKenna MP.

In January 1910 police extricated two women from inside the organ at the Dome, after they drew attention to their hiding place with a sneeze. Brighton-local Eva Bourne and high-profile activist Mary Leigh – had planned to leap from the organ during a talk that evening by anti-suffrage Prime Minister Herbert Asquith.

Further suffragette activities in Brighton ranged from parades along the seafront and open-air meetings on the Level to pouring ink into pillar boxes – as reported in local newspapers held at the Brighton History Centre.

Earlier in the year Brighton Museum & Art Gallery presented ‘Their Fight Our Future’ – two special ‘Behind the Scenes’ afternoons. RPM staff worked with students from Northbrook MET college who displayed their newly created costumes, inspired by women in history and were present to talk about who they chose and why.

One member of staff dressed up as local Suffragette Minnie Turner to talk to visitors, and curators also brought out objects from store, such as a bodice and bloomers from the 1890s and a Mary Quant mini skirt, illustrating how women’s changing fashions reflect social change.

The member of staff in the role of Minnie Turner, and the MET students also played a role in the major Free Day, International Women’s Day, which saw over 2100 people visit the museum.

The Keep hosted a talk by local historian Frances Stenlake on suffragist activity in Brighton and East Sussex during Women’s History Month in March, and again at the Open Day in September.

Additionally, relevant stories and images have been shared throughout the year on the Keep blog and social media channels, most recently about Margaret Bondfield, the first female cabinet minister who started her working life, aged 14, as a shop assistant in Hove.

Jean Calder, Secretary of the Brighton & Hove Women’s History Group, said: “These initiatives are the result of active campaigning in the community by women’s organisations. Great credit is due to the Council for responding to our proposals and assisting in every way it could. We really are so grateful.”