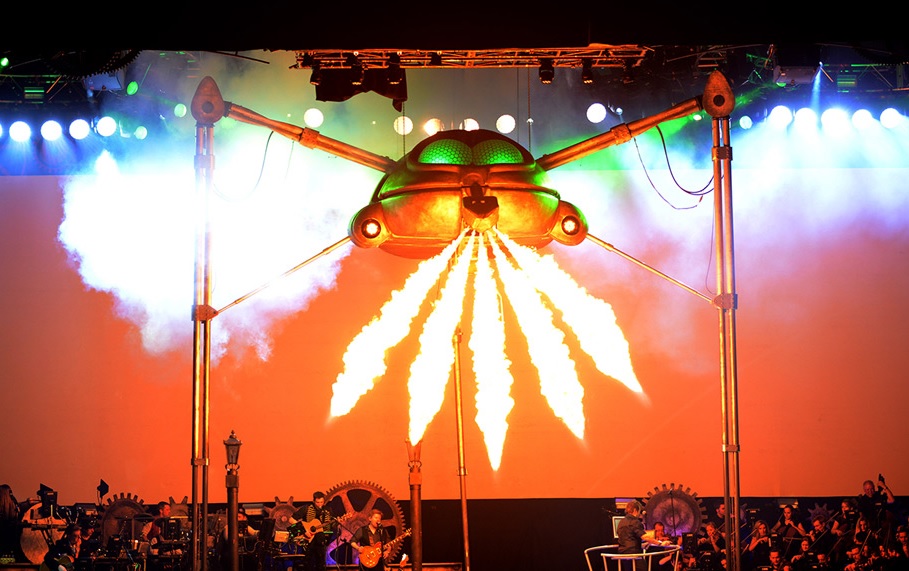 JEFF WAYNE’S MUSICAL VERSION OF THE WAR OF THE WORLDS – ALIVE ON STAGE – BRIGHTON CENTRE 16.12.18

“No one would have believed, in the last years of the 19th century, that human affairs were being watched from the timeless worlds of space. No one could have dreamed that we were being scrutinised, as someone with a microscope studies creatures that swarm and multiply in a drop of water. Few men even considered the possibility of life on other planets. And yet, across the gulf of space, minds immeasurably superior to ours regarded this earth with envious eyes, and slowly and surely, they drew their plans against us…” 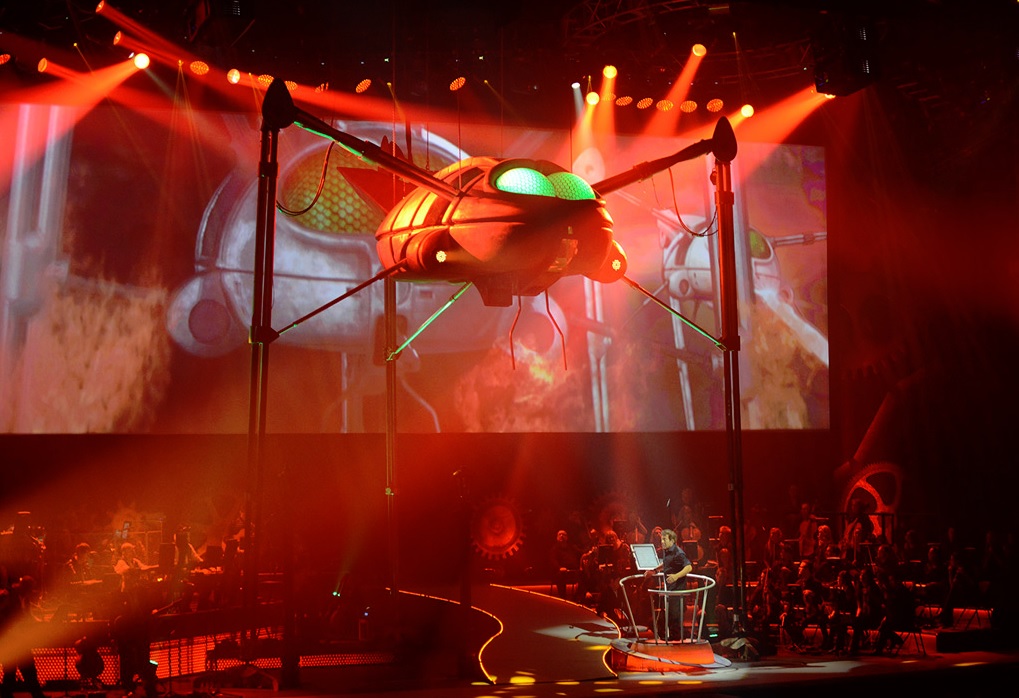 This was my first taste of the enthralling live performance of War Of The Worlds and I had deliberately kept away from the media reports from this 40th anniversary tour, and all previous ones, as I wanted to be totally immersed in the experience at the sold-out Brighton Centre.

We were attending the first night of two shows at the 4,500-capacity venue, being the culmination of this year’s 16-date British tour, which had already captivated audiences in Glasgow, Newcastle, Manchester, Leeds, Liverpool, Nottingham, Birmingham, Cardiff (2 shows), Bournemouth (3 shows), and London (2 shows). 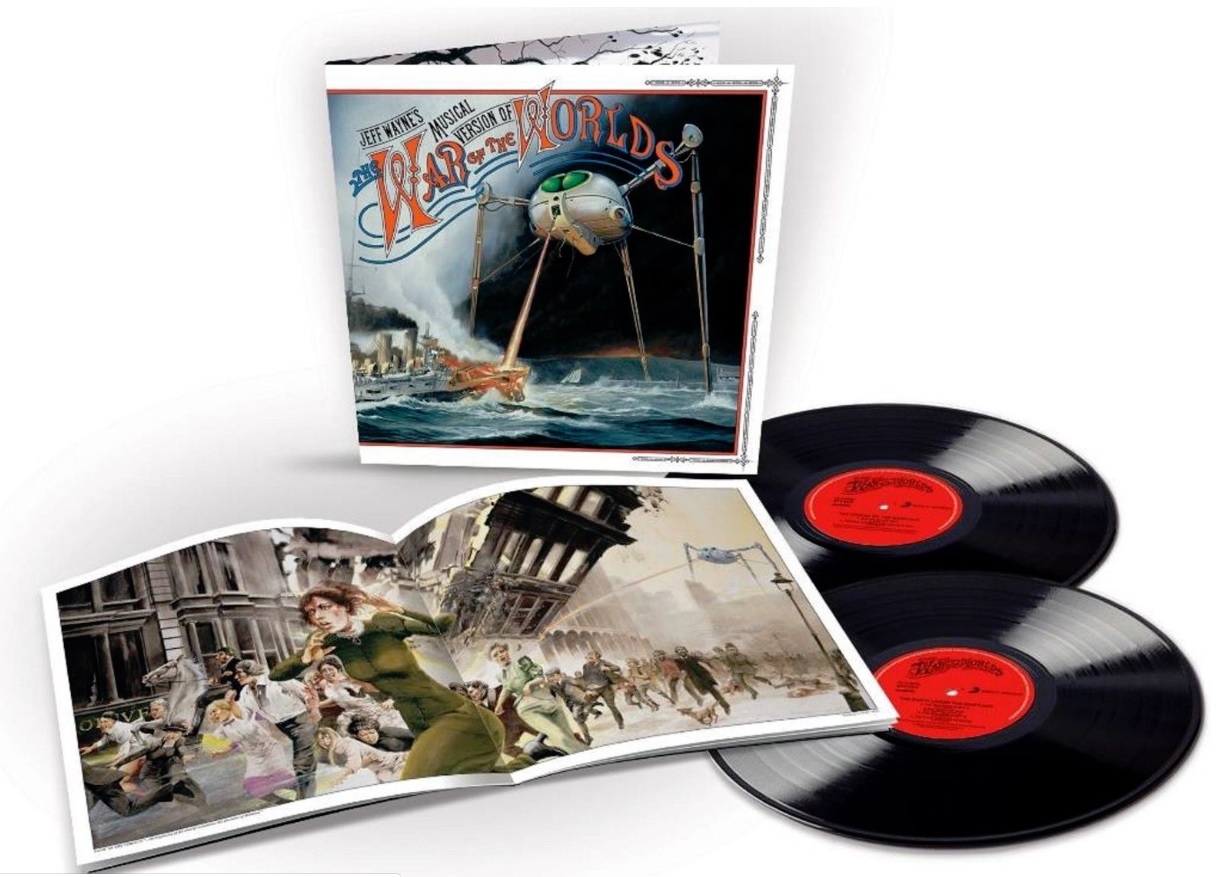 To be honest, I knew that Jeff Wayne’s Musical Version of The War of the Worlds 1978 concept double album had sold over 15 million records worldwide and has spent over 330 weeks in the UK album charts and had spawned two international hit singles – Forever Autumn and The Eve of The War – but I was unaware of just how massive an event this truly is.

This franchise is BIG business! I was calculating the figures involved and let’s say that there were 4,000 people in attendance this evening and the same again tomorrow, as 500 seats could not be sold at the edges of the stage, and tickets are £50 per person, then that’s £400,000 from just the Brighton leg of the tour. Then add to that the merch sold, which was heaving tonight with many punters wishing to part with £15 for the top-quality souvenir programme, or £15 for the CD or £25 for the many t-shirts, then you are surely on your way to half a million pounds! 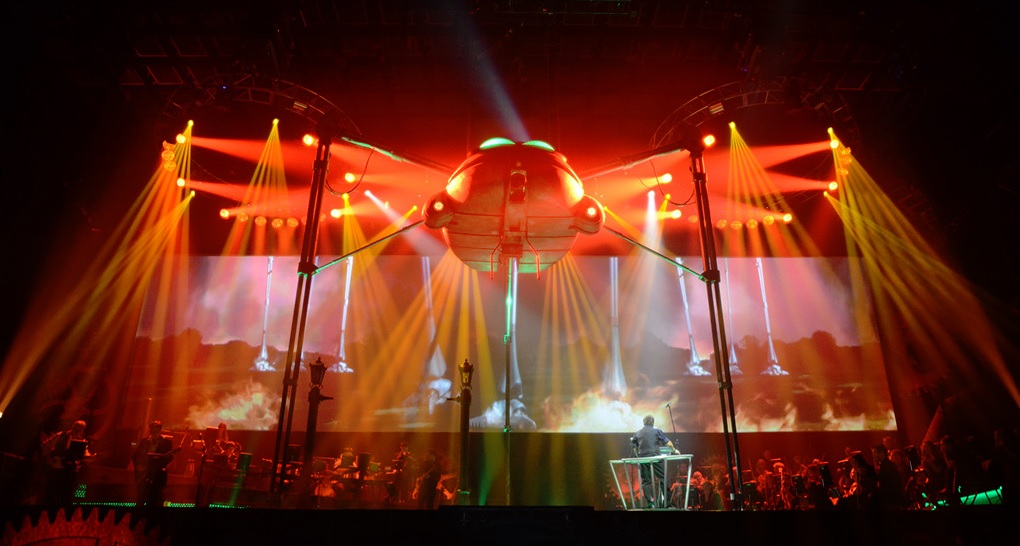 Right then, having said that, of course there are many cost factors involved, like the hire of the venue, the logistics of paying for the props and getting the impressive stage sets to the venue via the many trucks rammed with metal silver trunks full of ‘goodies’. Add to that, that the players and 45 musicians (9-piece Black Smoke Band and 36-piece ULLAdubULLA Strings) have to be watered and fed and given a room for the night and obviously need paying, then suddenly that half a million pounds doesn’t seem such an impressive figure after all.

But clearly there is something of a magnetism with this tour and ideology behind it all, as on leaving tonight’s performance I overheard some chaps talking behind me and it transpires that for one of them it was his 19th War Of The Worlds concert and tomorrow will be his 20th. So that chap alone has invested £1,000 in ticket purchases. 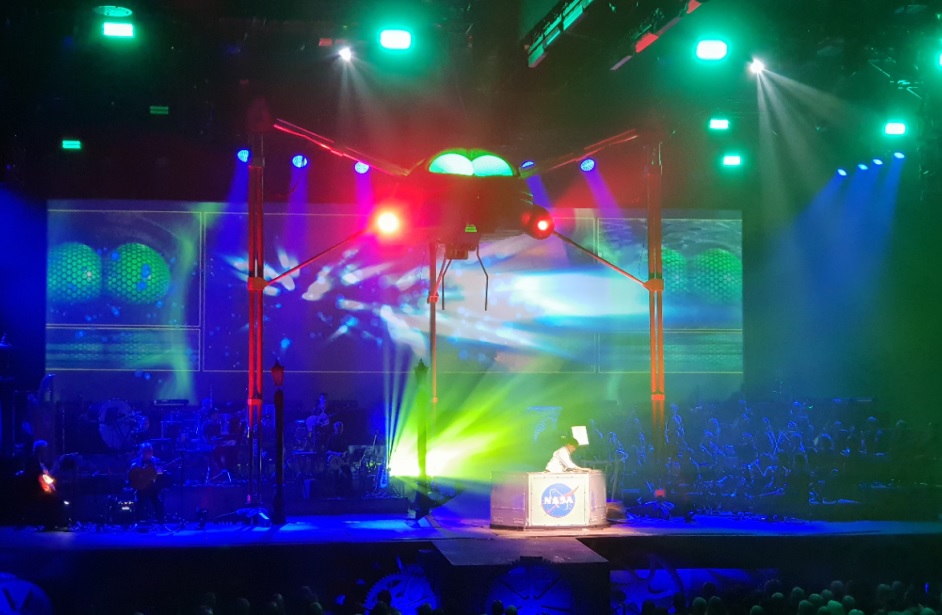 So why IS it so special? Many people love sci-fi and the original 287-page dark Victorian hardback novel by Bromley’s finest son, Herbert George Wells, is 120 years old this year and during that period it has tapped into the human psyche of fear from other worlds etc. Jeff Wayne’s debut 1978 prog/symphonic rock album rekindled this fear and heightened curiosity with Richard Burton’s legendary narration. This was backed up by an impressive cast including David Essex, Justin Hayward, Phil Lynott and Julie Covington. It won two Ivor Novello Awards and the Best Recording in Science Fiction and Fantasy (the judges included Steven Spielberg, George Lucas and Alfred Hitchcock). 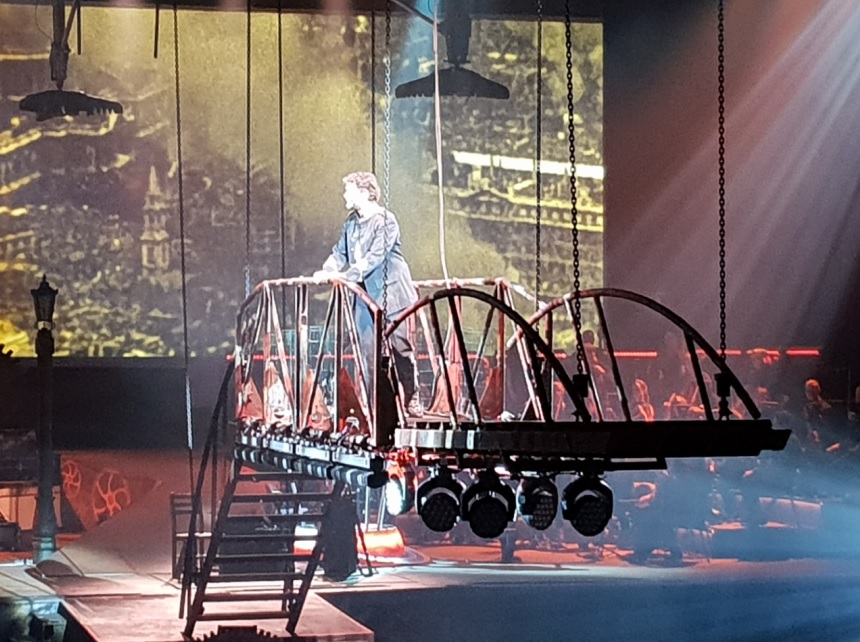 The bridge above the crowd

Wind the clock forward 40 years and War Of The Worlds is arguably as big as it ever been. Tonight’s Alive On Stage version is a perfect blend of prog concert/classical concert, a musical and a big budget theatre production. That’s why it works – something for everyone! And indeed this evening the audience was right across the age spectrum. 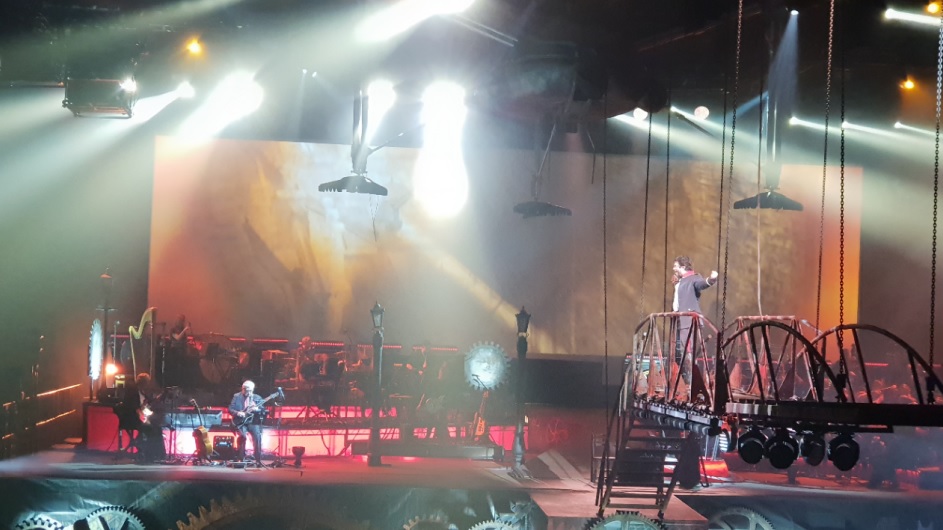 There was again this time around an impressive cast who were present tonight with Jason (Joseph and the Amazing Technicolor Dreamcoat) Donovan (as Parson Nathaniel), Carrie Hope Fletcher, who has 654,000 subscribers on her YouTube channel (as Beth, Parson Nathaniel’s Wife), twice Olivier Award nominated Adam Garcia (as the Artilleryman), multi-platinum-selling Brit Award nominated singer-songwriter and musician Newton Faulkner (as The Sung Thoughts of The Journalist), and lion-maned lead singer and songwriter of British rock band ‘Inglorious’ Nathan James (as The Voice of Humanity). 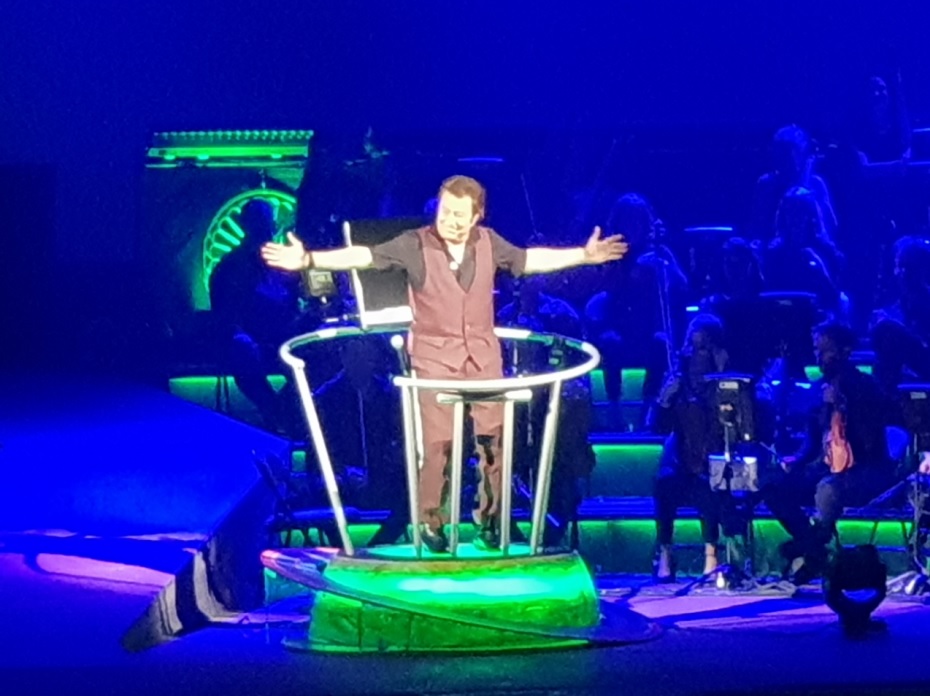 Also on stage tonight and on the accompanying storytelling background film is Anne-Marie Wayne (as Carrie, The Journalist’s Fiancée), who was actually born on the day that the Jeff Wayne’s Musical Version of The War of the Worlds album entered the UK album charts. Strange coincidence that and here’s another one, her father IS the 75-year-old American-born naturalised British composer, musician and lyricist Jeff Wayne and, guess what, he’s actually here on the stage conducting the musicians. Yep, the man in person is here. 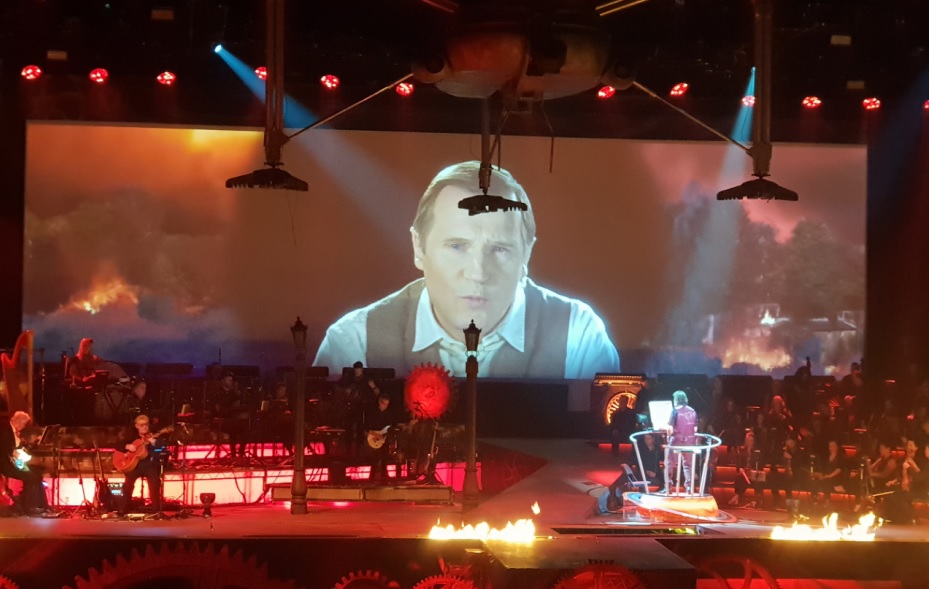 Someone who isn’t physically here is the final actor, who is an Officer of the Order of the British Empire – that’s an OBE to you and me – namely the world-class Oskar Schindler performing Liam Neeson, who portrays George Herbert, The Journalist. During the show Liam pops up here and there courtesy of some 3D holographic style broadcasts, which successfully interacts with the live actors. 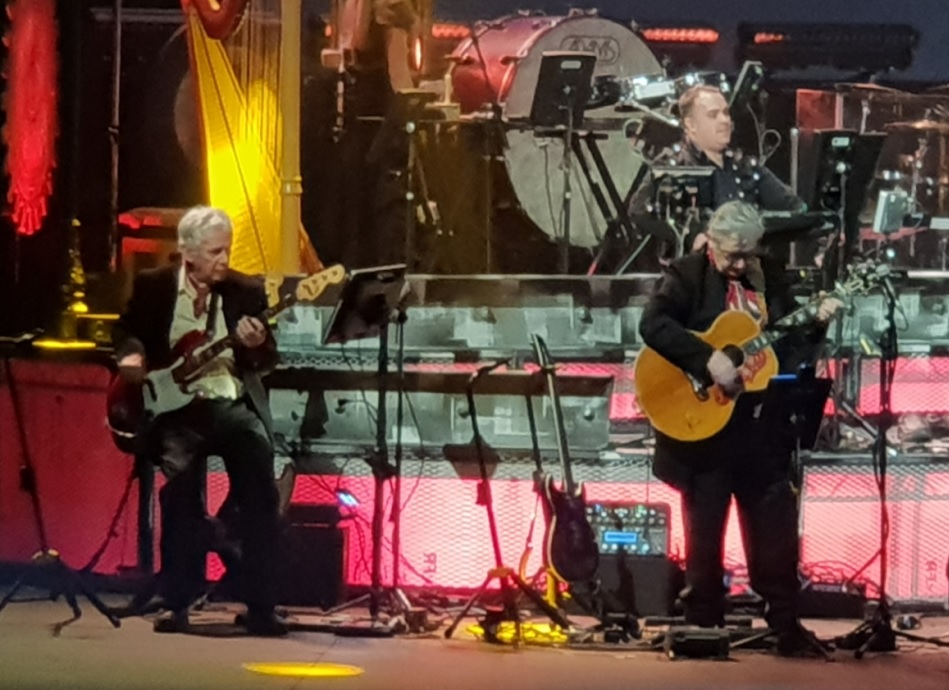 Also on stage as one of the leading musicians was 80-year-old bass-playing Herbie Flowers, who incidentally was in the final 1976-77 T. Rex line-up as well as being in the successful band Sky from 1978-95. And with him was 74-year-old Motor Bikin’ guitarist Chris Spedding, who interestingly was in the live band of The Wombles (yes really!) as well as being the producer of the Sex Pistols’ first demos, which were recorded on 15 May 1976. Yes, an impressive cast, but for me the highlight of the show was the iconic moving 3-tonne, 35-foot tall Martian Fighting Machine, complete with real firing flame heat rays that came down towards the audience. Behind that was the 100ft wide ‘Animation Wall’ with 2 hours of (possibly slightly dated) CGI. 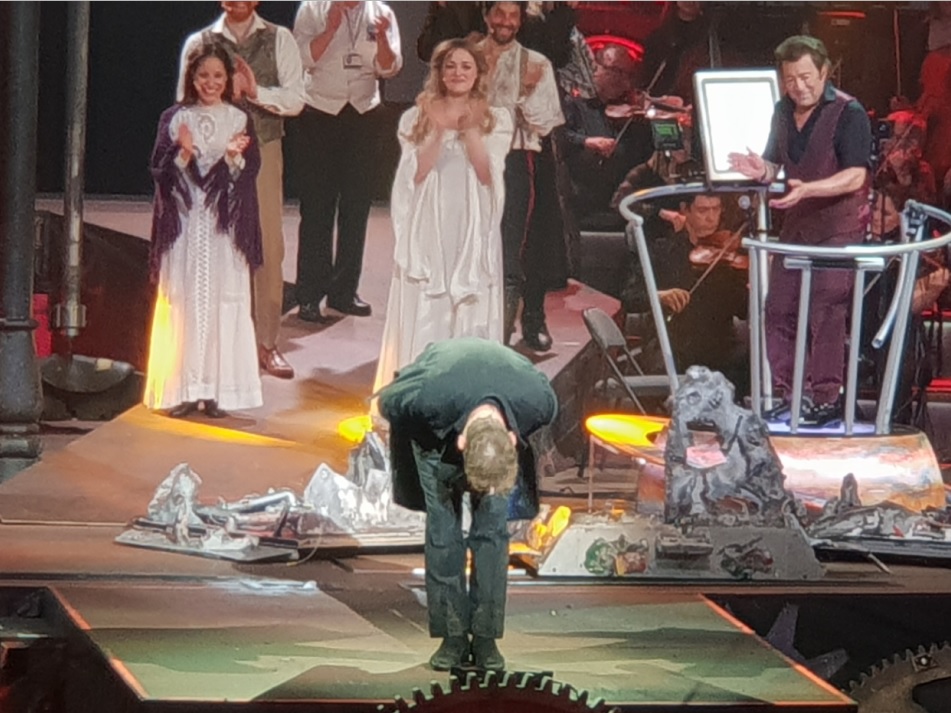 Jason Donovan takes a bow. Jeff Wayne on the right.

The show was split into two acts, 8pm – 9pm and 9.15pm -10.25pm and during that time I witnessed trap doors on stage that I hadn’t ever noticed before and at times the actors extended the show into the crowd, with the best being the bridge that miraculously descended from the gantry so that The Artilleryman could do his bit. I loved watching the leaves being dropped from various parts of the gantry by strategically placed people in black. It was therapeutic seeing the coloured leaves fall for Forever Autumn on to the punters below.

The final big-up being the Surround Sound for this performance, which enhanced the show immensely. 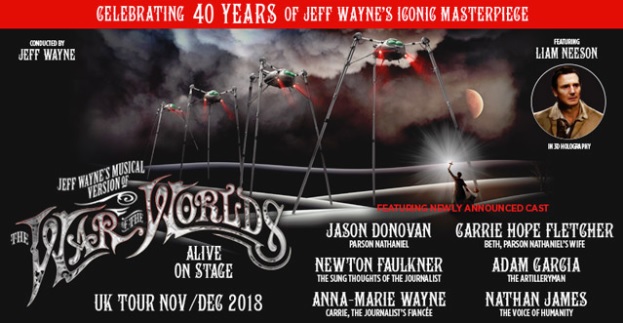