Hove MP tells Prime Minister to go back to the people

Hove Labour MP Peter Kyle told the Prime Minister Theresa May to go back to the British public during the debate on Brexit – Britain’s exit from the European Union.

His call for a second referendum came less than 24 hours before the Prime Minister’s defeat this evening (Tuesday 15 January) by 432 to 202 – a defeat by 230 votes.

MPs will tomorrow debate and vote on whether the House of Commons has confidence in Mrs May, the Conservative leader, to continue as Prime Minister.

Brighton Pavilion MP Caroline Lucas also made the case for a second referendum and was among the sponsors of a cross-party motion of “no confidence in the government”.

After Mrs May’s resounding defeat in the Brexit debate, the Green MP said: “This is game over for Theresa May. But it’s only the end of the beginning of this whole Brexit saga.

“MPs don’t want Theresa May’s deal, they rightly reject no deal and they can’t have a fantasy renegotiation.

“Unable to win the most important vote in a generation, our government is no longer in power. So I will support this motion of no confidence – but a general election where both of the biggest parties support some kind of Brexit won’t heal the very real divisions this process has caused.

“If the Remain campaign learns from the mistakes of 2016, a People’s Vote could deliver the frank and honest debate we need and provide an opportunity to move on from Brexit, empower communities and build a fairer country.

“I’ll keep campaigning for the public to have a say over our future relationship with our nearest neighbours, no matter who occupies Number 10.”

Mr Kyle told fellow MPs yesterday: “There was nothing inevitable about reaching this impasse.

“In reality, the Brexit we have before us in this deal is the Prime Minister’s creation and hers alone.

“The Prime Minister’s approach to the Herculean task of negotiating Brexit has been astoundingly out of touch with the needs of both Parliament and the public.

“The crucial first step of when and how to trigger article 50 hardwired acrimony into Brexit from the outset – acrimony between Parliament and the executive and within and between the communities we represent.

“It set us on a course on which failure to ​command a majority within Parliament or among the public was inevitable.

“The government spent £10 million of public money going all the way to the Supreme Court to stop us in Parliament having a say on the triggering of article 50.

“Do we imagine, had the Prime Minister won that case, that her intentions were to be more inclusive of Parliament, to be more consultative, or to be more driven to listen, learn and engage? Of course not.

“I voted against triggering article 50 because there was no evidence that the government were prepared for the negotiations – and they were not.

“What followed was 18 months of negotiations within the Tory party, all the while pretending that that had the same effect as negotiating with our partners in the EU.

“There was no Chequers moment for the EU because its negotiating principals were signed off by all 27 nations, the European Parliament and the European Commission three months after article 50 was triggered.

“Our government – the ones who started this process – spent three quarters of the negotiating time rowing among themselves.

“The Prime Minister survived every row by telling each side exactly what they wanted to hear and never putting anything in writing.

“It is an unholy coalition held together by smoke and mirrors, so it was no surprise that the wheels came off the moment she published her deal in legally binding text. It need not have been that way.

“When the Prime Minister took office, giving that remarkable first speech on the steps of Downing Street, she had the opportunity of a lifetime to reconcile our country and heal our politics.

“She could have toured our nations to listen to people from all areas and all backgrounds. She could have established ways to include the public in solving the Brexit challenge.

“The Prime Minister said that she pulled the vote at the last minute because she had listened to this House and needed to rework the backstop but even that fails the truth test.

“If she had truly listened to this House, she would have heard that concerns about security were raised more frequently than the backstop, as were immigration and citizens’ rights.

“And the most heavily mentioned concern in those debates, raised three times as often as the backstop, were economic security and trade. 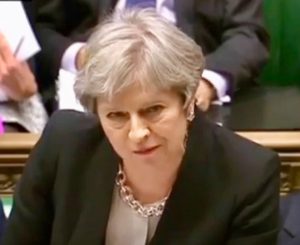 “What has she done to deliver on what members demanded last time? Nothing. Another wasted month of precious article 50 time.

“The Prime Minister says we must not let the great be the enemy of the good when it comes to a Brexit deal – and there we have it.

“With this deal, she has literally taken the ‘great’ out of Great Britain.

“There is no plan B to unite the House if the motion fails to secure agreement tomorrow (Tuesday 15 January).

“The very fact that no single option has galvanised a majority in this place is the perfect guide as to whom we should turn to help solve it.

“The government may be paralysed and Parliament gridlocked. It is time we turned outwards to ask the people to guide us on the way forward.

“On the steps of Downing Street, upon taking office, the Prime Minister told the nation that her government ‘will do everything we can to give you more control over your lives’.

“If now is not the moment to make good on that promise, when is?​”

Because politics is bigger than party sometimes I’d like to wish @lloyd_rm @peterkyle and @CarolineLucas an equally good day at work today. Making clear our city’s overwhelming rejection of #BrexitShambles

My take on why I can’t vote for the Withdrawal Agreement tonight.

In addition, a look ahead at the non-Brexit related news this week, including how my Bill – The Civil Partnerships, Marriages and Deaths Bill – is faring getting through Parliament.https://t.co/m8UoRLtkRt