Hill was at the controls of a 1955 Hawker Hunter fighter jet when it crashed during a display at the Shoreham air show on Saturday 22 August 2015.

Eleven men – six of them from Brighton and Hove – died in the crash on and next to the A27 but incredibly Hill survived.

The former Royal Air Force pilot pleaded not guilty to 11 charges of manslaughter by gross negligence at the Central Criminal Court – better known as the Old Bailey – in London.

Hill, of Sandon Road, Sandon, Buntingford, Hertfordshire, who also flew for British Airways (BA) as an airline pilot, was described as an experienced pilot.

Before the prosecution opened, the judge Sir Andrew Edis – Mr Justice Edis – warned the jury: “You mustn’t research the case yourself.”

He said that this was a case that concerns a disaster. Such an event attracts a great deal of interest – media reporting of it and its consequences. Lots of speculation. Some no doubt well-informed. Some ill-informed.

He even warned them specifically not to look up the official report by the Air Accident Investigations Branch of the Department for Transport because its conclusions are challenged by Hill.

The judge added: “This is a tragic case … It is also an important trial to be involved in. Your task is a very important one. You put emotion to one side. This is a case anyone would have an emotional reaction to. It was a terrible disaster.

“Make sure that you’re able to try the case only on the evidence that you have heard and seen in court.”

Mr Kark said: “Mr Hill was part way through his display when his aircraft crashed on the A27.

“The aircraft disintegrated and the crash caused a massive fireball.

“The effects of that crash were devastating and 11 people lost their lives as a result.

“Mr Hill miraculously escaped because his cockpit separated from the rest of the aircraft ending in a ditch. His seat was thrown out of the cockpit and he was left lying on the ground.

“He was saved by the bravery of firefighters, paramedics and a doctor who managed to get to him despite the fires still burning all around.

“Until the moment that it crashed, there was nothing wrong with the flying capabilities of that aircraft. It was in excellent working condition.

“The crash happened purely because of pilot error. 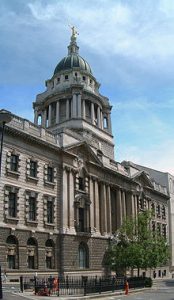 “The pilot was attempting a manoeuvre called a bent loop which requires the aircraft to reach a specific height before it begins its downward trajectory.

“Mr Hill did not reach the height required but nevertheless continued the manoeuvre.

“In sort, he did not have the height to pull the aircraft out of its dive, back to level flight at a safe height and, as a result, he crashed into the ground.

“The prosecution’s case is that it was Mr Hill’s serious negligence that led directly to the loss of those 11 lives.”

Mr Kark told the jury: “Your task, having heard all of the evidence, will be to determine whether the prosecution has proved so that you are sure that the cause of the crash was the gross negligence of Mr Hill.”

The 11 men who died were