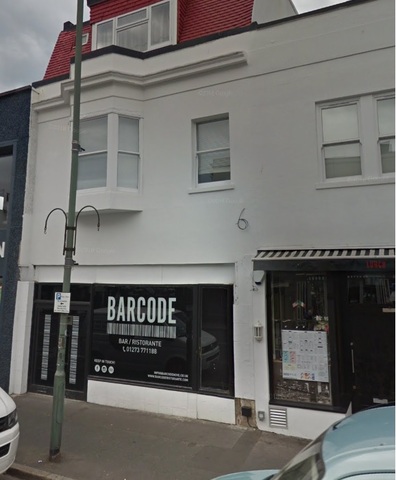 A café owner previously banned from selling alcohol there after repeatedly flouting council rules has applied for a licence for a new cafe next door.

Emad Abdolkhani was caught selling alcohol without a license at Barcode at 128 Church Road, Hove, when he served a drink to councillor Clare Moonan.

He also disregarded planning regulations, ignored council officers when they asked him to fix a noisy flue there – and when his company went bust, it owed tens of thousands to the taxman.

Barcode is still open, but its new licence states that neither Emad, 29 nor Foad Abdolkhani, 31, can be involved in its running.

It has since expanded into number 126 next door, and now, Emad has applied for an alcohol licence for that unit, to be called Persia.

But despite his difficult history with the council’s regulatory services, no objection has been raised by officers.

And Mr Abdolkhani denies the claims being made about him.

However, ward councillor Andrew Wealls has written a strongly worded objection to the city’s licensing panel, which will hear the application next week.

Councillor Wealls wrote: “You will note that the applicant and DPS [designated premises supervisor] is Emad Abdolkhani, who has been disbarred from working at or acting as DPS at neighbouring Barcode, 128 Church Road.

“You will also be aware that a key reason was that alcohol was served at the neighbouring premises (to Councillor Clare Moonan) whilst there was no licence to sell alcohol at the premises at the time it was served.”

Two neighbours have also raised a variety of issues they had with Abdolkhani while he was in charge at Barcode.

A noisy flue fitted without planning permission, bins and cars left in front of garages and noisy music, were all stated as issues with Barcode when Mr Abdolokhani was in charge.

One neighbour, whose name is redacted from the application, said: “We do not believe Emad Abdulkhani’s (sic) has the requisite skills to be a licence holder.

“He either does not understand his obligations to neighbours or he understands them and believes he is above the law and can ignore them.”

As well as listing the flue noise issue, another neighbour, whose details were redacted, was also concerned about work carried out without planning permission in the central Hove conservation area.

They said: “Looking at the way Emad Abdulkhani has approached the opening of this new business at 126 Church Road is deeply concerning.

“Once he (or his father) had purchased a lease on the premises he set about gutting the building before he had even applied for planning permission and without consulting the planning department and the neighbouring businesses and residents.”

A month before the winding up process was formally started in December 2015, the Abdolkhani family (sometimes spelt Abdulkhani) – formed a new company called Code Hove Limited, which applied for a new licence.

Mohammad Abdolkhani then successfully applied for a licence the following month, July 2016.

Barcode expanded after the shop next door at 126, Stanlee Luggage, closed down in August 2017.

A planning application to convert 126 from a shop to a restaurant was refused last year and is currently under appeal to the planning inspector.

According to Companies House, Code Hove has not filed any accounts or confirmation statement since 2017, and in December 2018, Emad filed to have it struck off the register.

Emad is now the sole director of a company called Persian Deli Food Ltd which was set up in January this year.

Councillor Wealls, who plans to speak against the application at next week’s hearing, added: “In typical fashion the alterations were made before planning permission was granted.

“I appreciate this is not an issue with respect to a licence application but does go some way to show the character of the applicant, whom I consider absolutely inappropriate to be granted a licence and acting as DPS.”

Emad Abodolkhani wants to sell alcohol at Persia from 11am-10.30pm Monday to Saturday and 11am-10pm on Sundays.

Brighton and Hove City Council licensing department has not raised any objection, instead asking for a condition limiting the sale of alcohol to people seated at tables and served by waiting staff.

Sussex Police has asked for CCTV with recordings kept for 31 days and a well-publicised Challenge 25 policy.

The café site is in the city’s special stress area, where special consideration is given to new licences due to the levels of crime and disorder and public nuisance.

The licensing panel will discuss the application when it meets on Monday 8 April at Hove Town Hall.