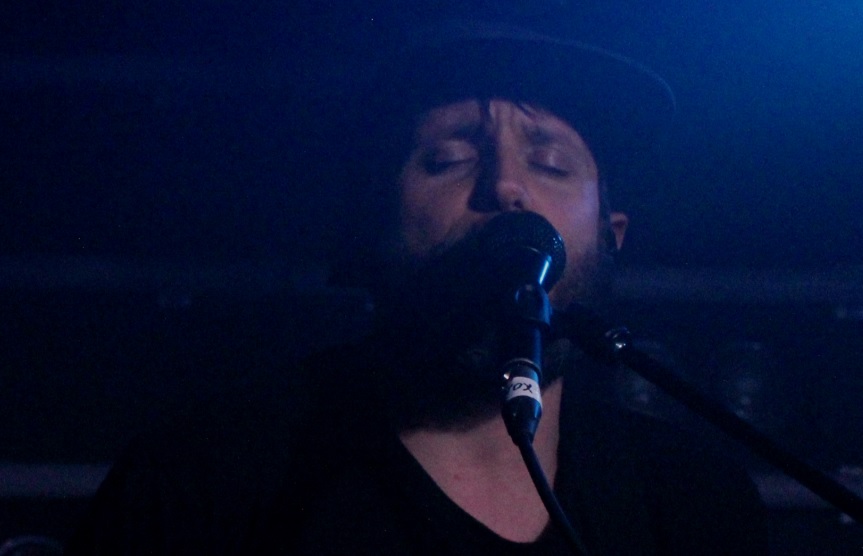 Although Brighton has a vibrant music scene, it’s not really that often that we get any industrial music bands and those of a similar ilk down to the seaside, instead they just tend to hang around in London. 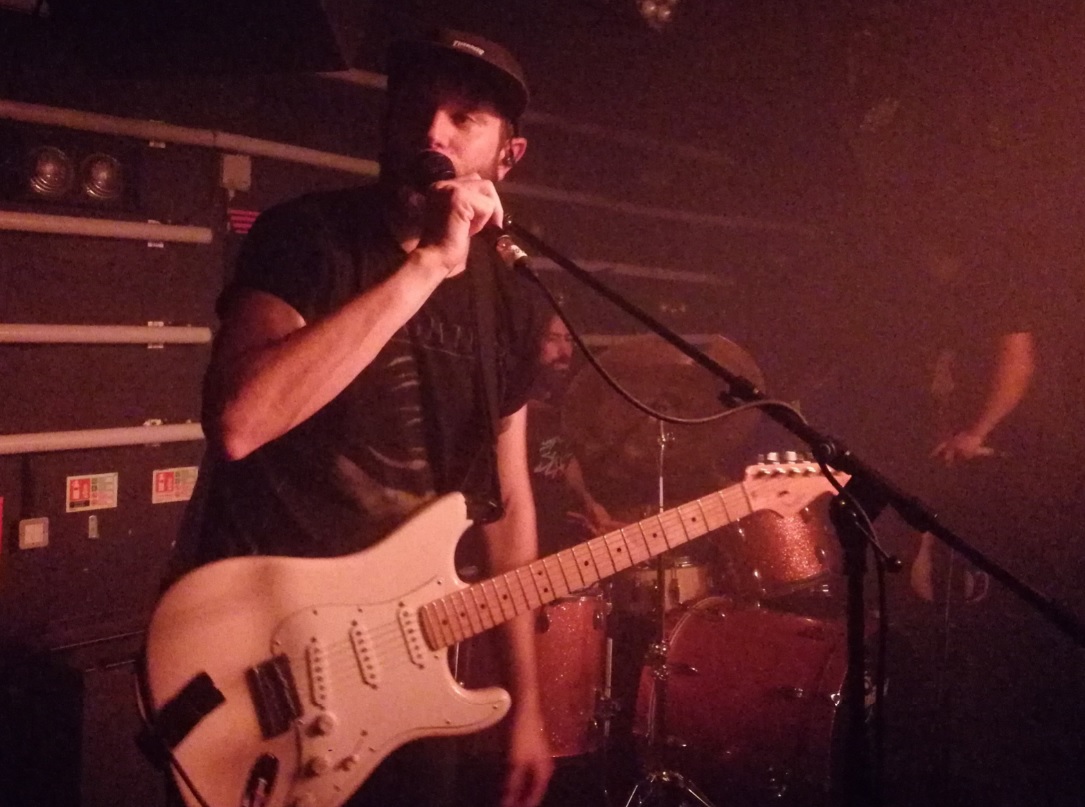 The scene isn’t as big in the UK as it is on the continent, with Germany, Scandinavia and Eastern Europe being able to draw them in. There’s been a large scene in the States and Canada for many years with the flag being flown by the likes of Nine Inch Nails and former Sussex resident and now US import Gary Numan. Incidentally tonight’s main act HEALTH have toured with both of these icons. 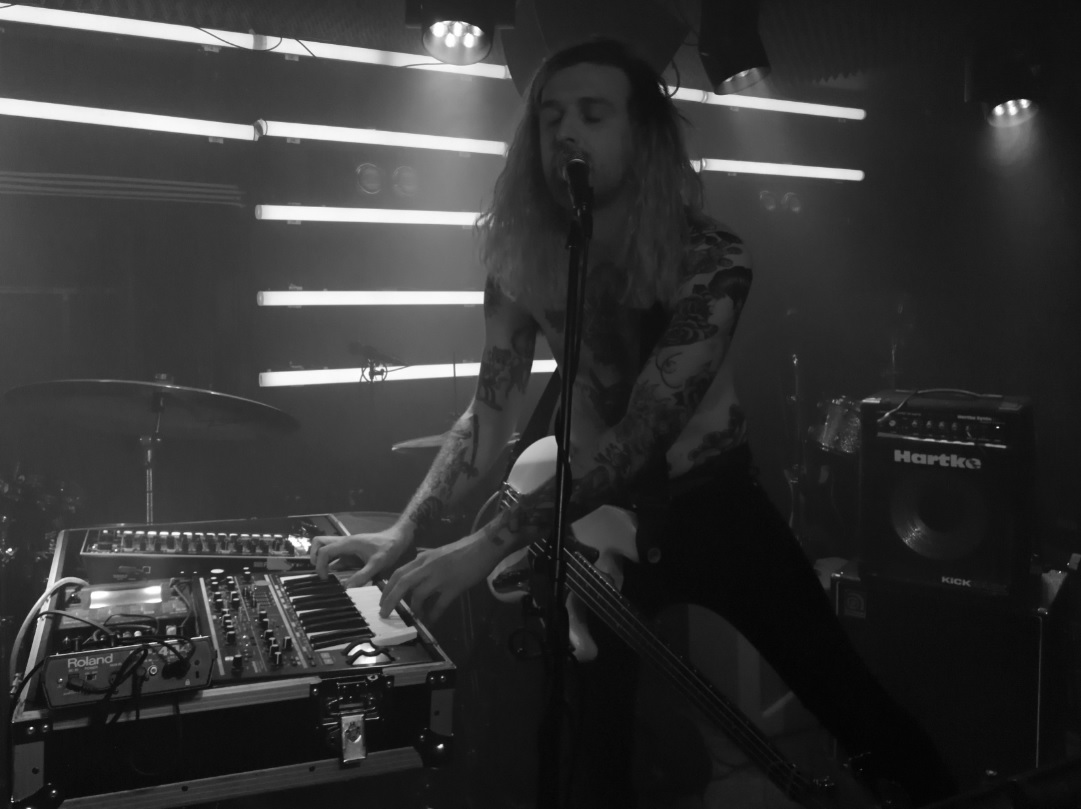 The first act on the bill this evening was TAYNE who is a London based Experimental Noise outfit created by Matthew Sutton. 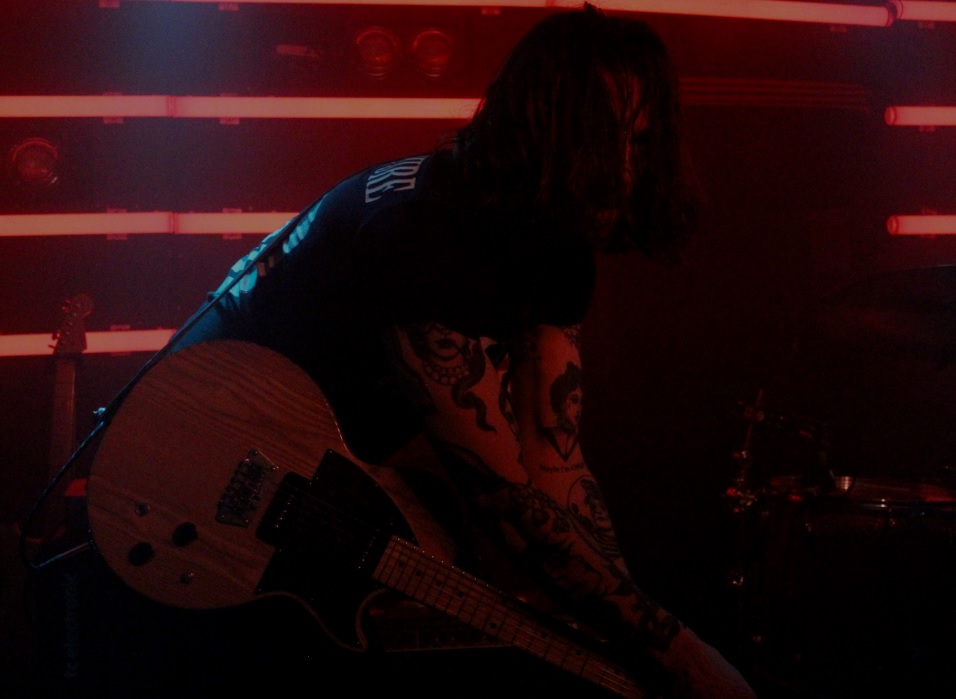 TAYNE music is an aural assault that weld moody, atmospheric vocals, punishing guitars, and overwhelming electronics, to pulsating rhythms that create an intense listening experience that is uniquely their own. 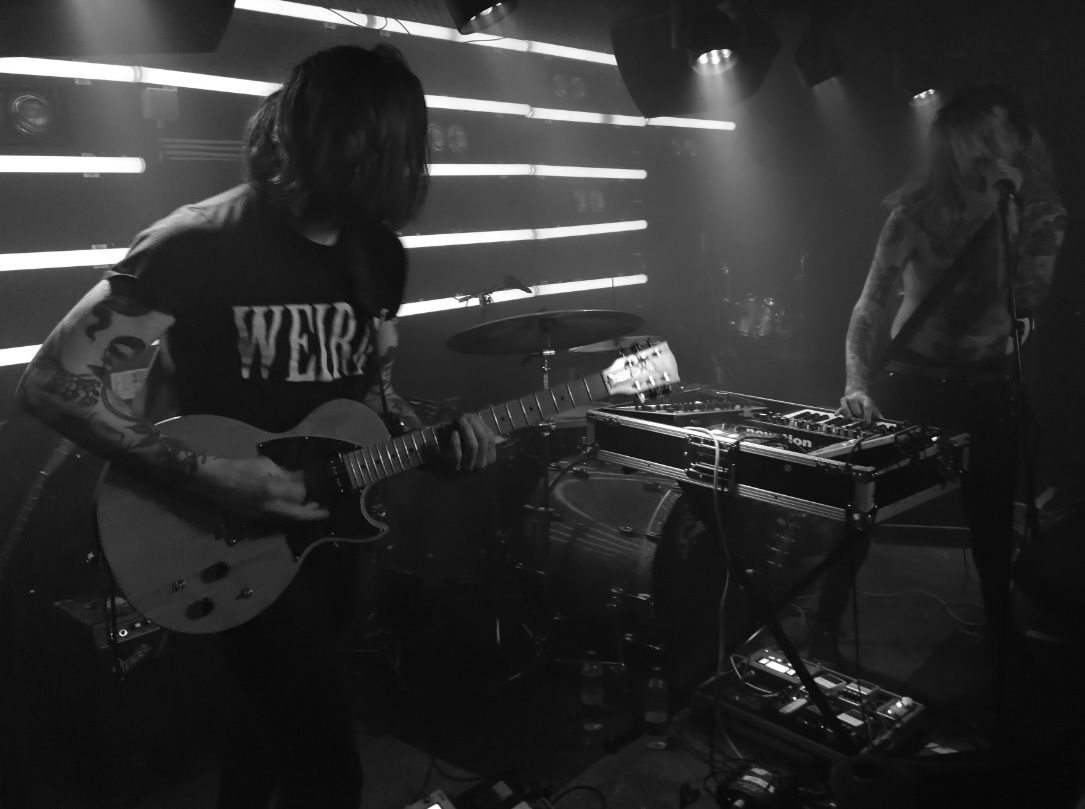 At Patterns he was joined by a mate and they both played guitars and Matthew flitted between guitar and keyboards. The guys rattled through the tracks with some haste whilst Matthew strengthened his neck muscles by headbanging with his long flowing blond locks. 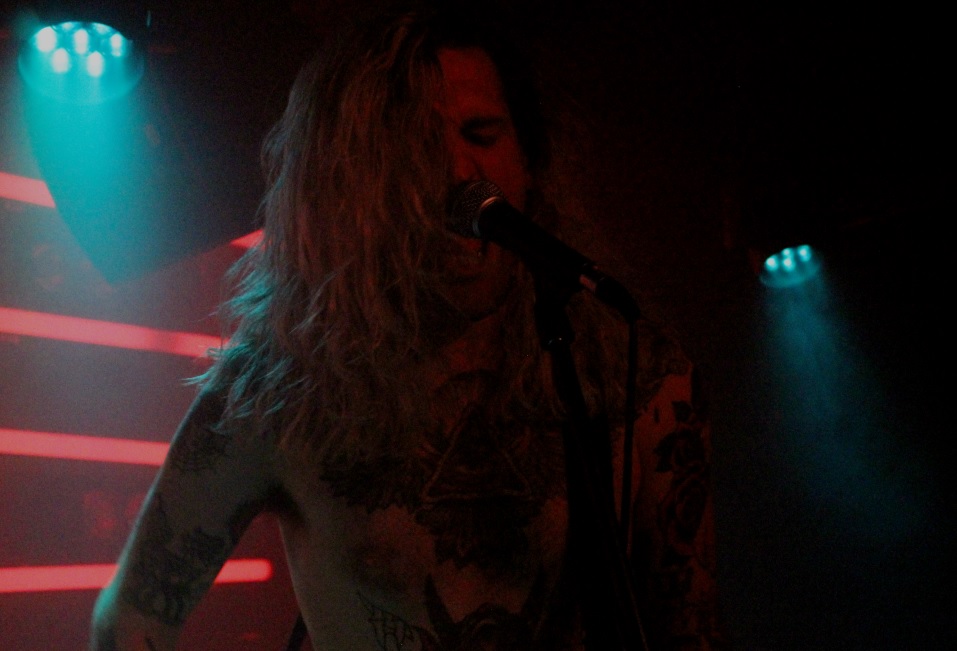 The lyrics were a tad difficult to decipher and each song was similar to the previous, thus I guess an industrial version of The Ramones. As there were three acts on this evening, this meant that the duo had to start when the club was a tad empty, but by the end of their set it was getting nicely packed. Find out more by visiting the Bandcamp page HERE. 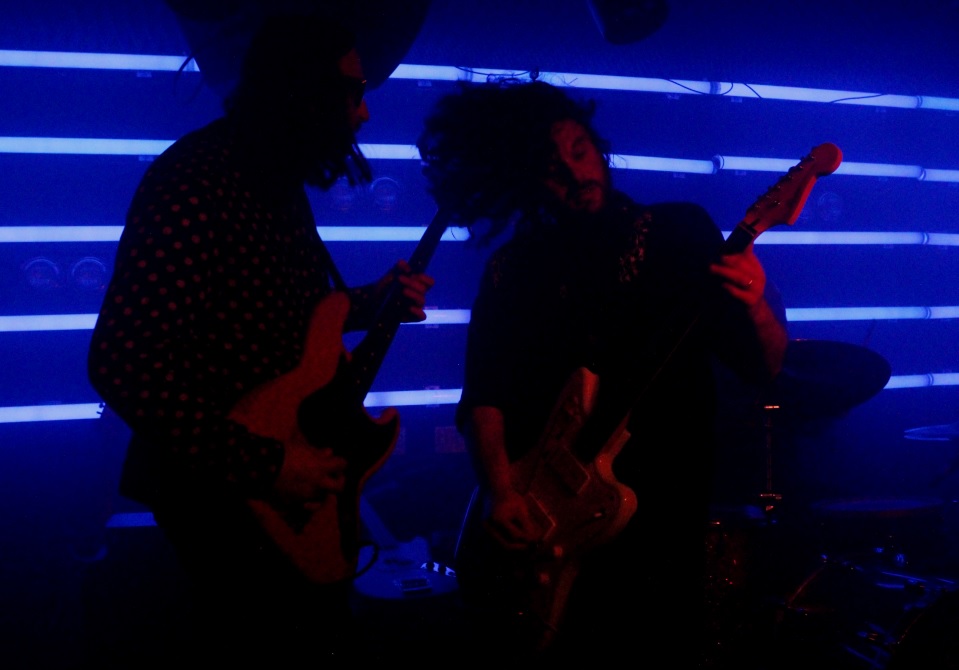 The middle band of the bill this evening was HOLYGLAM who are a post punk foursome made up of Kevin Lennon, Asahi Noda, Dan Stirrat and Rob Ling. They hail from the capital, but have now relocated to Brighton. They enjoy crafting a new era of discordant sonic fuzz. 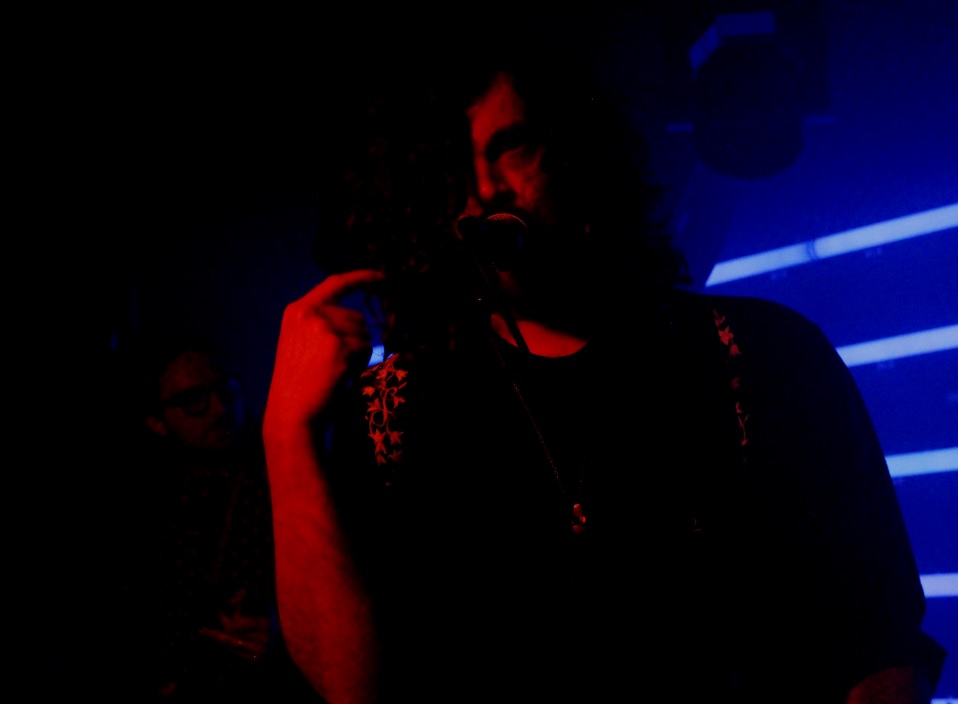 They clearly had a ball at Patterns as they have posted this on social media: “Thanks to everyone who saw us last night with HEALTH and TAYNE BAND! Especially Neat Neat Neat who booked us for such an awesome show!”. 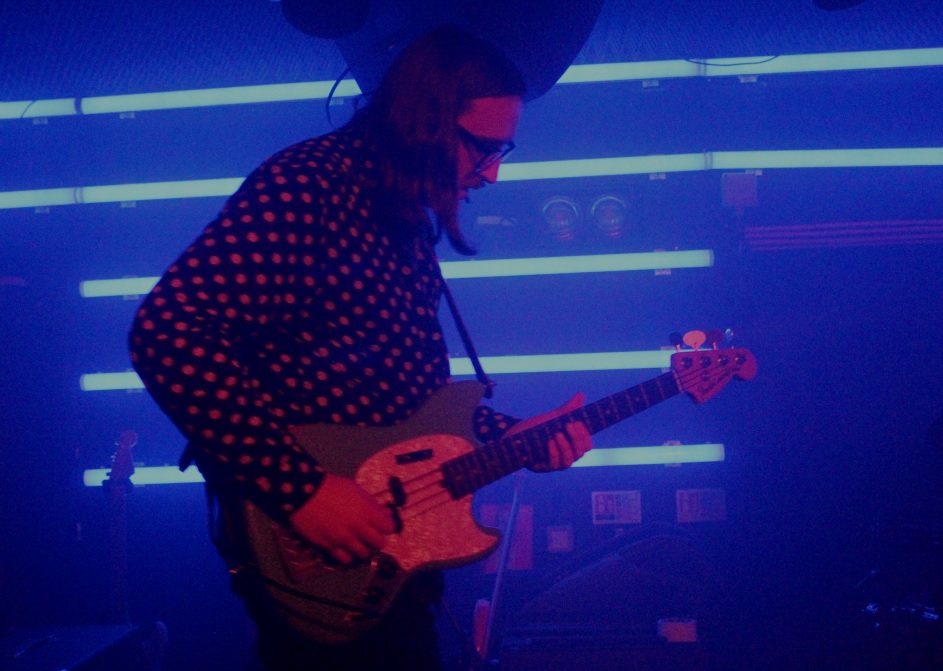 For myself there were three gigs of interest this evening and so I left the photographer in situ, whilst I legged it around the corner to the Latest Music Bar during the HOLYGLAM set, in order to watch that evening’s opening act. Then I returned to Patterns after being away for three-quarters of an hour in order to see the headline act. I’m rather banking of being able to witness HOLYGLAM live as they are now a local outfit. 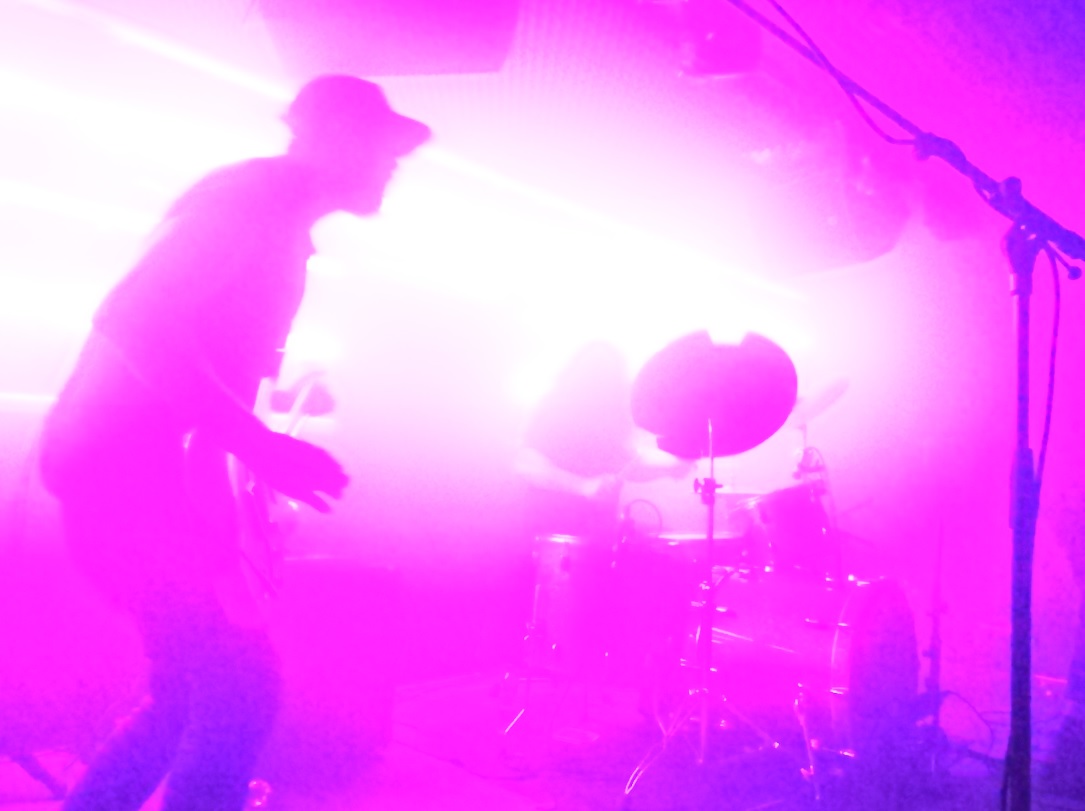 The headline act tonight at Patterns being HEALTH who are trio consisting of Jacob Duzsik, John Famiglietti and Benjamin Miller. The guys have played sold out shows and festivals around the world ranging from Coachella to Primavera to Austin Psych Fest as well as supporting the aforementioned NIN and Numan.

The band really set the mood tonight with the dry ice, dark gloomy lighting (where they could hardly be seen – and I was at the very front!) and their LOUD booming music. Note the emphasis on LOUD. It’s difficult to imagine if you weren’t in attendance, so the best way to convey this to you is for you to watch this video of a similar performance. 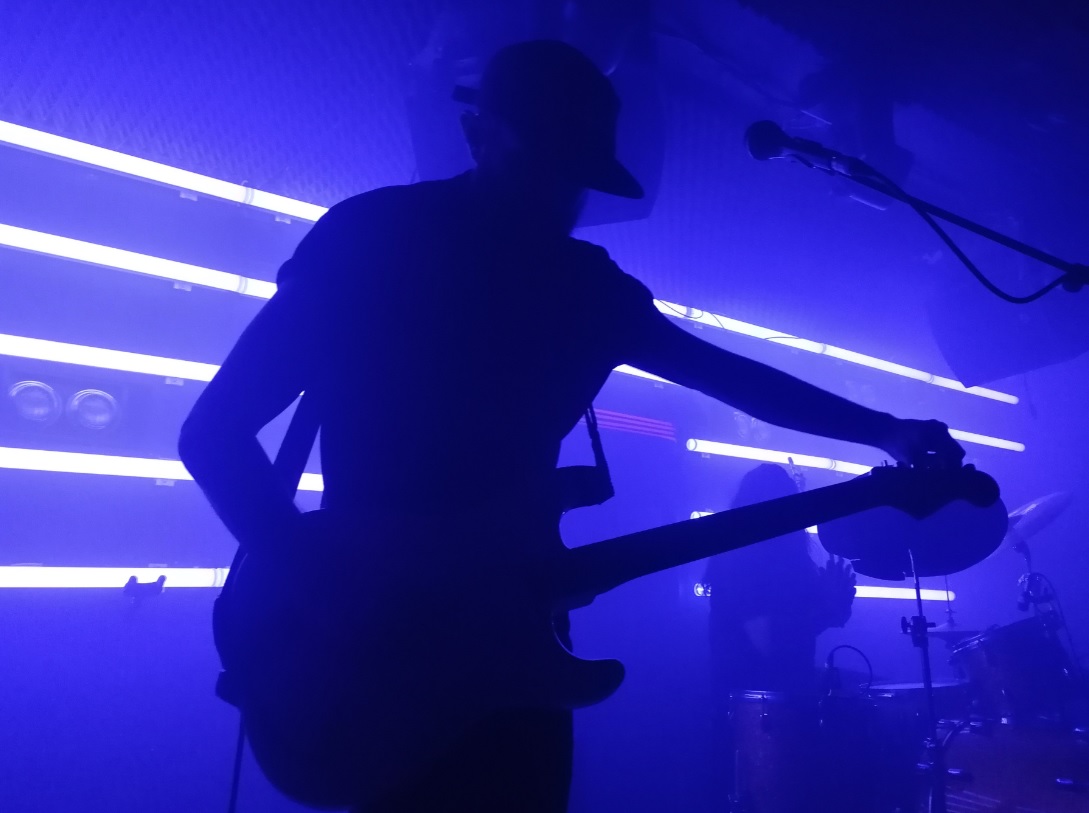 HEALTH formed in Los Angeles in 2006, playing their first shows at The Smell, L.A.’s legendary DIY venue, which also hosts some of the earliest performances of No Age, Mika Mika and Abe Vigoda. “We just sat in a dark room with no windows and tried to figure out how to write a song,” HEALTH’s singer and guitarist Jake Duzsik says of the band’s early days. “Through a process of tug-of-war and cooperation, we started building these weird songs together.” 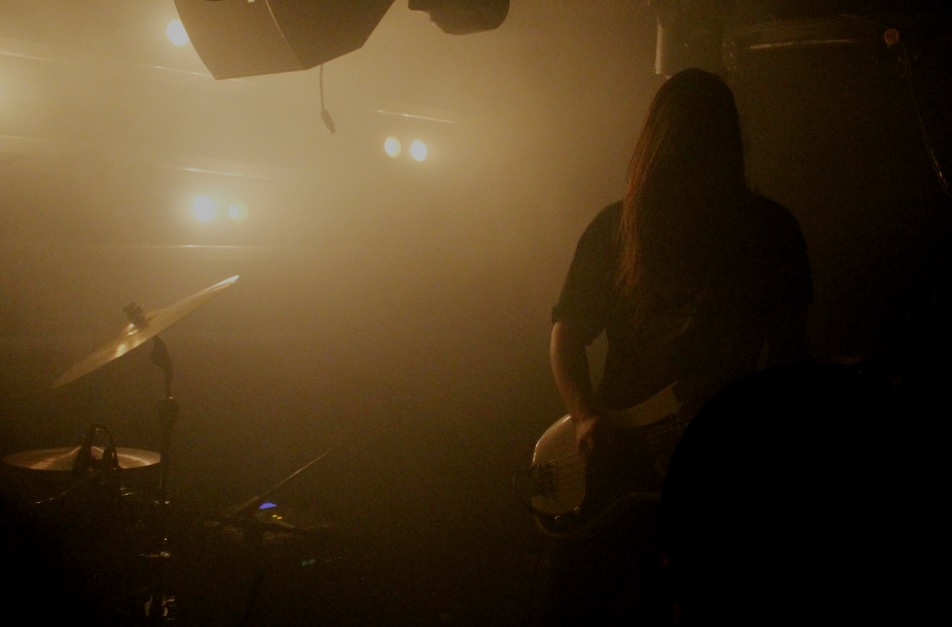 HEALTH released their self-titled debut album in 2007, recorded by the band themselves during a sweltering summer locked in the smell; Pitchfork raved that the self mixed, self produced record “mixes the bombastic pound of Boredoms, the skewed structures of Deerhoof, the tribal thump of Liars, and even the synth squirts of Black Dice and Excepter.” This is followed by ‘HEALTH//DISCO’ (2008) and ‘::DISCO2’ (2010), both projects where HEALTH curated artists and producers to remix their songs to construct two complete albums – featuring Crystal Castles, Pictureplane, Nosaj Thing, Azari & III, Javelin, Tobacco, etc.

HEALTH released their second full-length, ‘Get Color’, in 2009. The NY Times said of the album, “HEALTH are high-impact minimalists, building patterns from barbed and brutal sounds…re-examining the art-punk legacy of the 1980s with fresh ambitions and youthful impatience.” 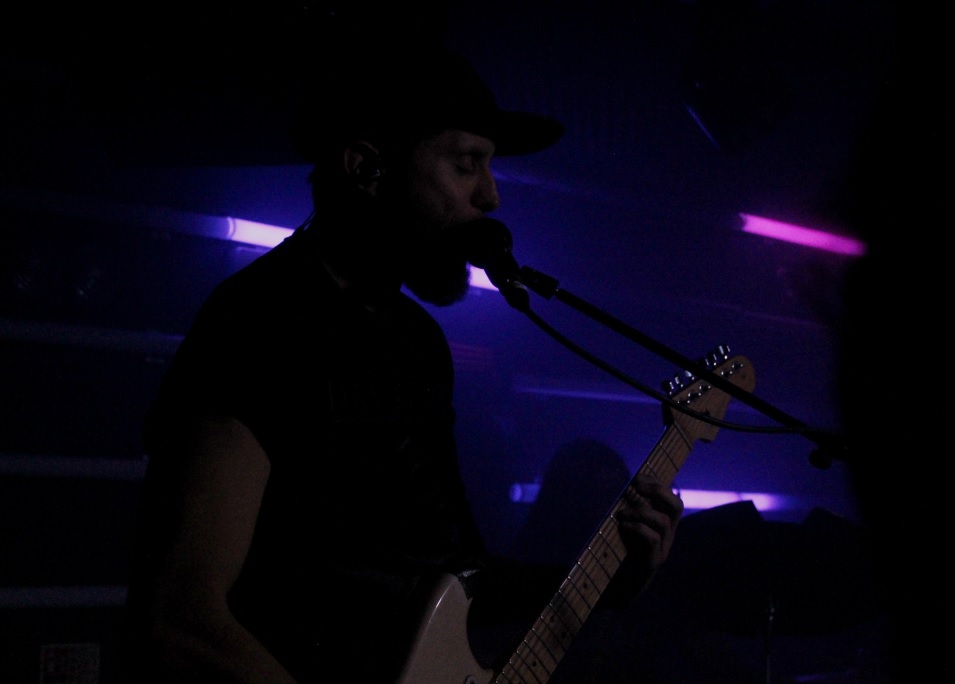 ‘DEATH MAGIC’, was released in 2015 on Loma Vista Recordings. Co-producer and multi-instrumentalist John Famiglietti described it as “bigger than anything we’ve done before but still uniquely our sound.” The album received critical praise from The New Yorker, Pitchfork (BEST NEW TRACK) and The FADER, while The Los Angeles Times heralded the band as “”One of the city’s best live acts and inventive arrangers of raw noise and eerie vocal melodies… the first hints of DEATH MAGIC suggest a new fidelity, heaviness and precision, along with a marked clarity in singer Jake Duzsik’s vocals.”

Their latest offering is ‘VOL4:: SLAVES OF FEAR’ – rattle your way through their dozen tracks HERE. 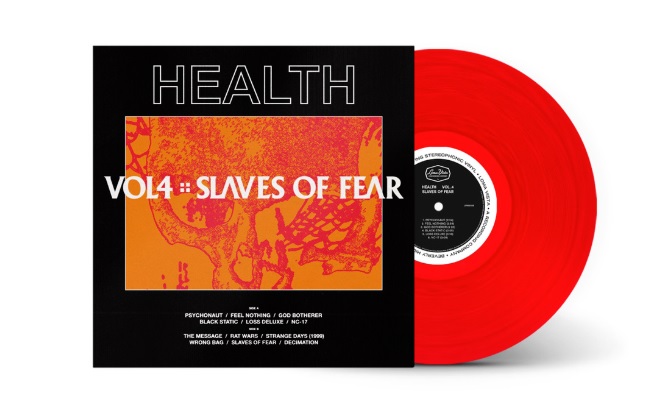 The band had saved the best for last as Brighton was the final date of their 43-date ‘Europe Endless’ tour, which has nothing to do with the Kraftwerk track of the same name. There were only 8 gigs in the UK as part of this January – March tour, but they certainly are not a band who let the grass grow under their feet, as just 10 days after the ‘Europe Endless’ tour finished, they are off on a different 24-date US tour entitled ‘Wheels Of Fear’.

The band performed 16 ear splitting drum pounding tracks for us lucky punters. Having said that, the vocals are almost juxtaposition to the music as they sound as though you are listening to Talk Talk or the Pet Shop Boys vocally with heavy noise on top. These were delivered with next to no banter and some immediately went straight into the next tune and so the guys raced to the end of their tour.

Find out more about them HERE and listen if you dare HERE. 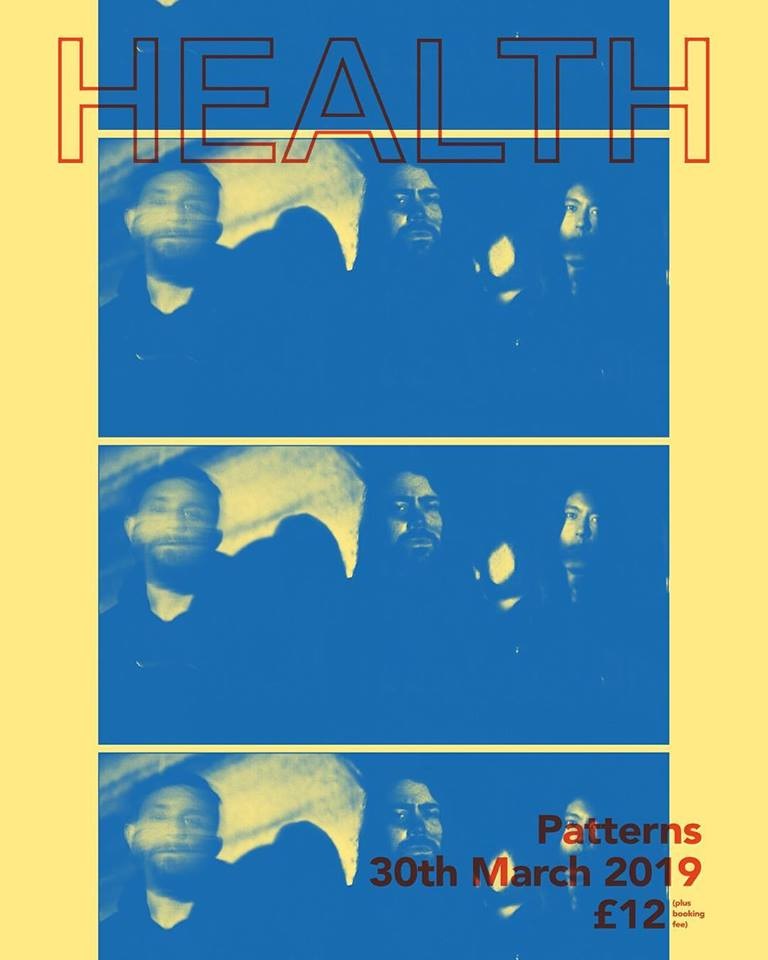 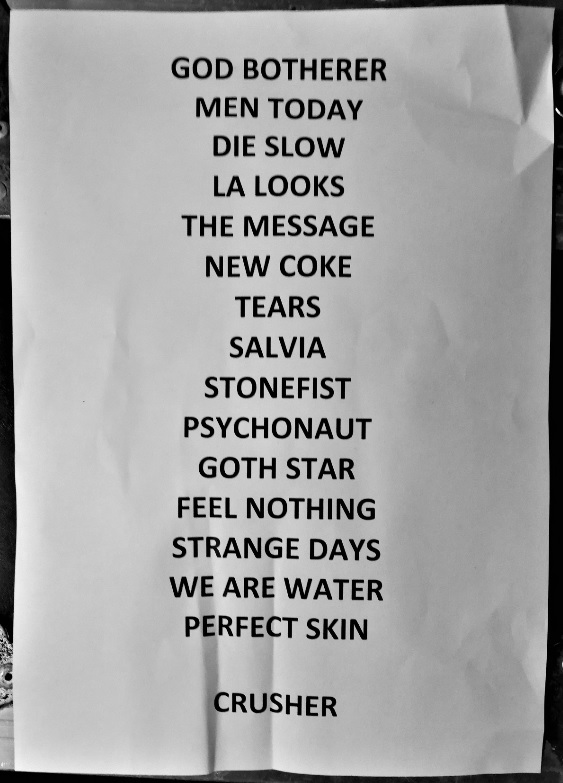 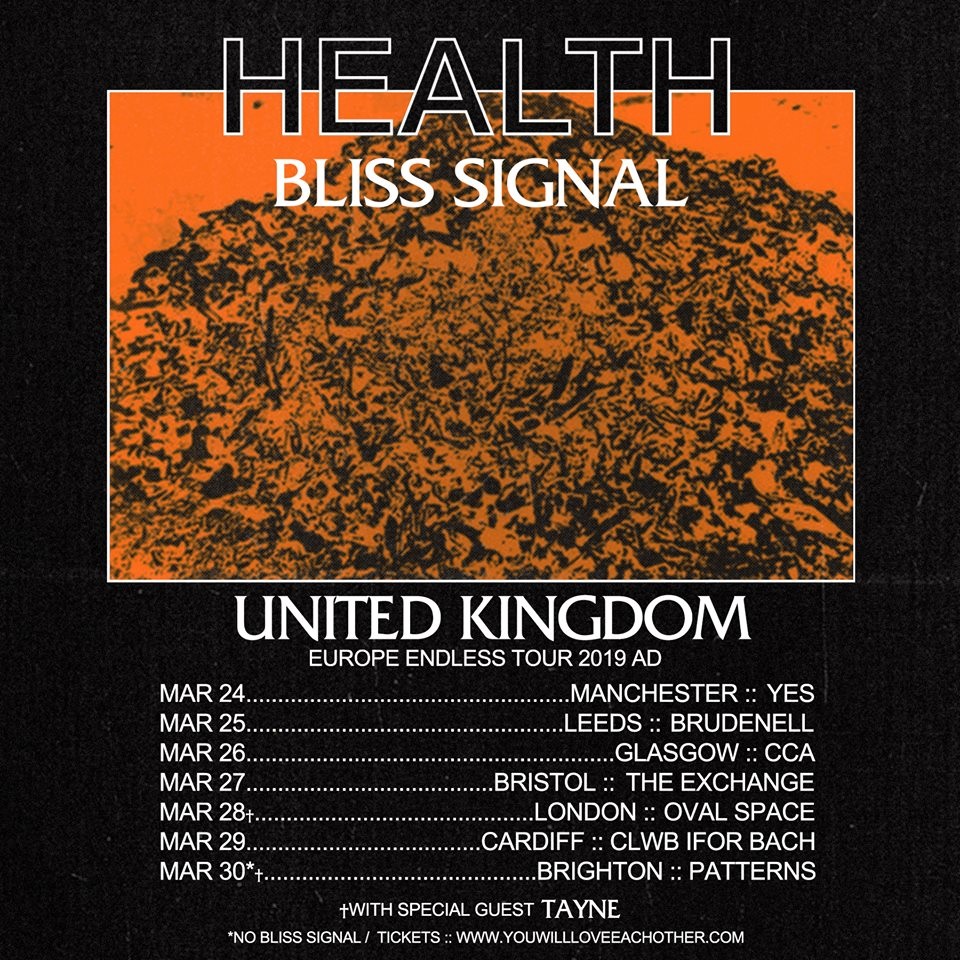 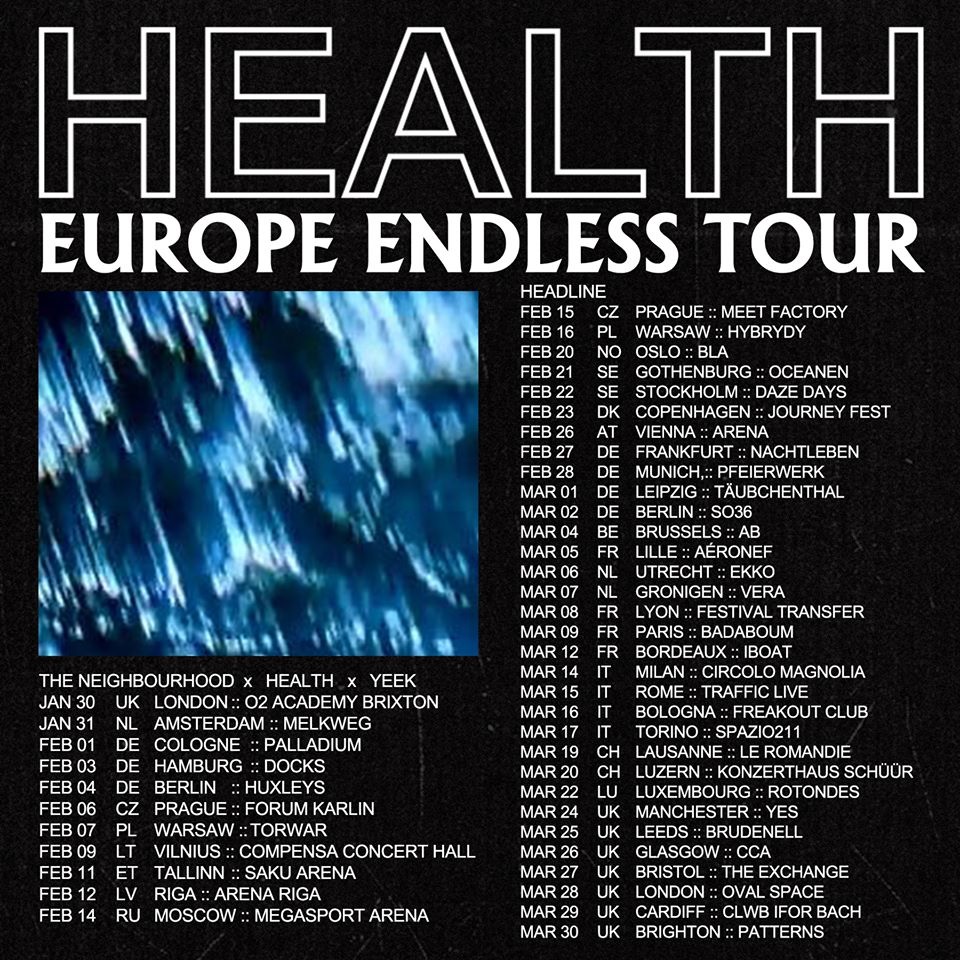 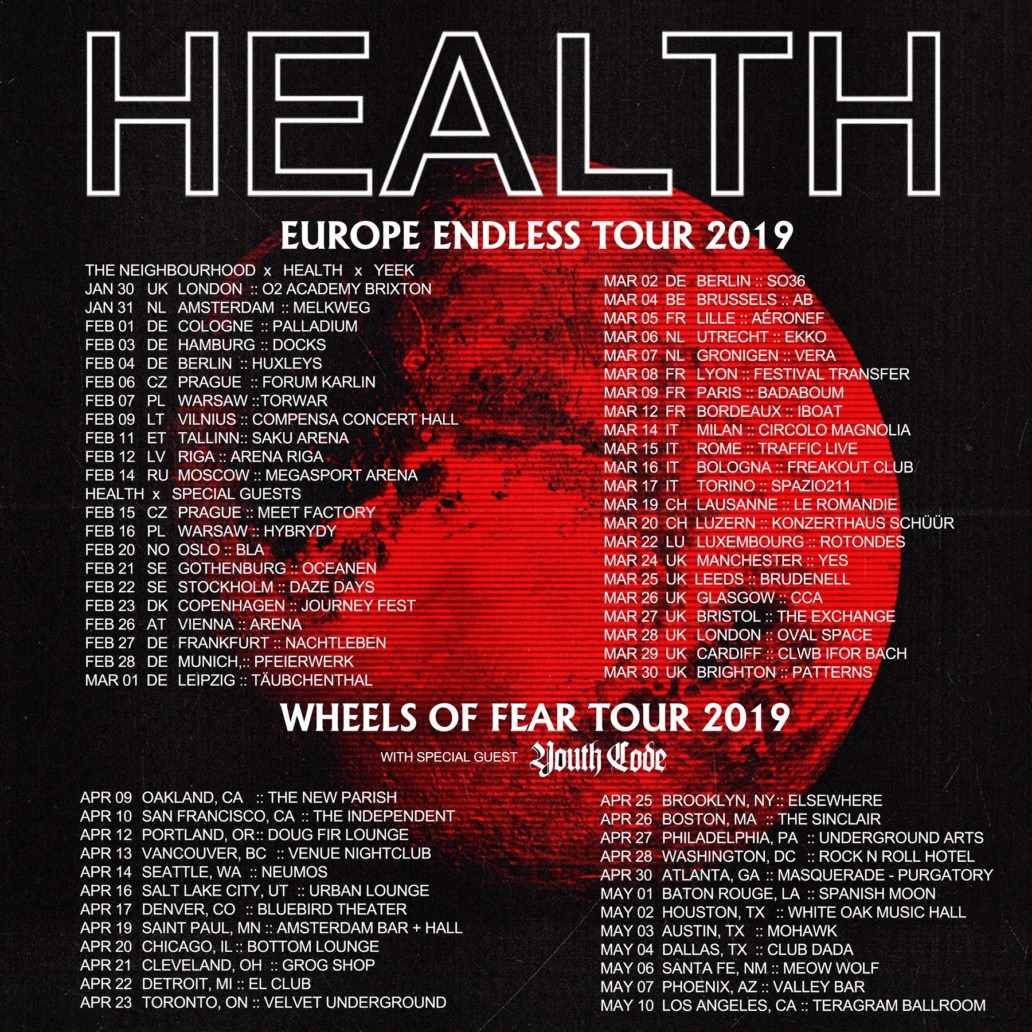