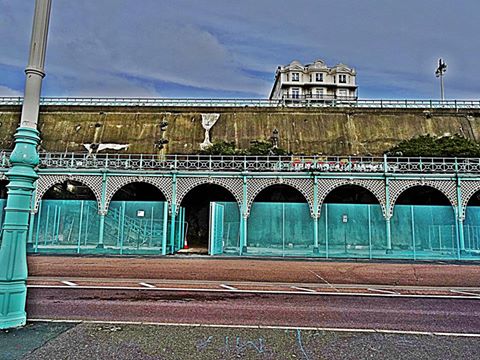 The restoration of Brighton’s Madeira Terraces will get an immediate £2million cash injection after the city council decided to plough on with the project despite being turned down twice for lottery funding.

The money from the council’s capital reserves had already been earmarked in 2018 as match funding for any grants from the Heritage Lottery Fund.

But now that two successive bids have been rejected, the council says it is thinking again about how to get the huge project underway.

Meanwhile, an advisory panel consisting of community representatives is being set up following a stakeholder meeting last Thursday.

Nick Hibberd, the council’s executive director for economy, environment and culture said: “I’d like to thank everyone who came for their commitment and enthusiasm for this unique heritage asset.

“Community input is crucial to making the restoration a success and the advisory panel will open up a practical way for those interested to stay involved and help place their vision at the heart of the restoration.

“We don’t underestimate the challenge of restoring 865km of a Victorian structure exposed to coastal weather and the resources we will need, but we can achieve our shared goals by working together and making things happen.”

The panel will have up to 12 members made up of categories including community groups, event organisers, businesses, tourism and conservation representatives and is likely to meet quarterly once different category groups are decided. In the next few weeks we’ll be inviting the community to put forward their nominated panel members and then work with them to arrange a date for the first Advisory Panel meeting.

More than 40 people attended last week’s meeting and speakers included the Regency Society, the Save Madeira Terrace Raffle Group and Building Green, a team of volunteers restoring the green wall.

Regenerating Madeira Terrace will provide a new future for the eastern seafront along Madeira Drive.

A progress report will be taken to the next tourism, development and culture committee on 20 June when councillors will discuss the next steps, including the need for a specialist design team to give the council and community partners a better understanding of the actual costs of achieving the restoration.

As well as the £2million from capital reserves, the project also has £460,000 raised through a crowdfunding campaign which is set to be spent on three arches as a test case for how the others could be restored.