Brighton and Hove councillor ‘sacked’ by a computer 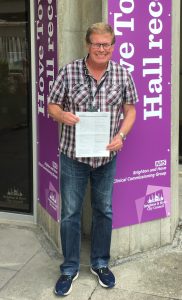 Councillor Peter Atkinson with his P45

North Portslade councillor Peter Atkinson got the shock of his life when he opened a letter from the council – the envelope contained his P45.

This is the form given to staff when they leave a job.

The recently re-elected Labour councillor said: “I thought that maybe there had been a recount without me knowing.”

It’s not as if being a councillor is a paying job. All 54 members of Brighton and Hove City Council receive a basic allowance – less than £12,000 last year – and they are taxed on it.

As a result, when a councillor loses their seat at an election or stands down, they receive a P45.

Councillor Atkinson said: “We have a small team within the council called Democratic Services and they look after all the committees and also help councillors with any problem they might have.

“They’re a great bunch of hard-working people and soon put the problem straight, which was caused by a computer error.”

Councillor Atkinson was returned last month with an increased majority – almost a thousand compared with almost a hundred in May 2015 – so said that he was understandably taken aback to receive his marching orders.

But with the computer glitch sorted, he said: “All’s well that ends well.

“I look forward to serving the residents of North Portslade for a further four years.”