“Teenage dreams so hard to beat” at ‘John Peel Night’ 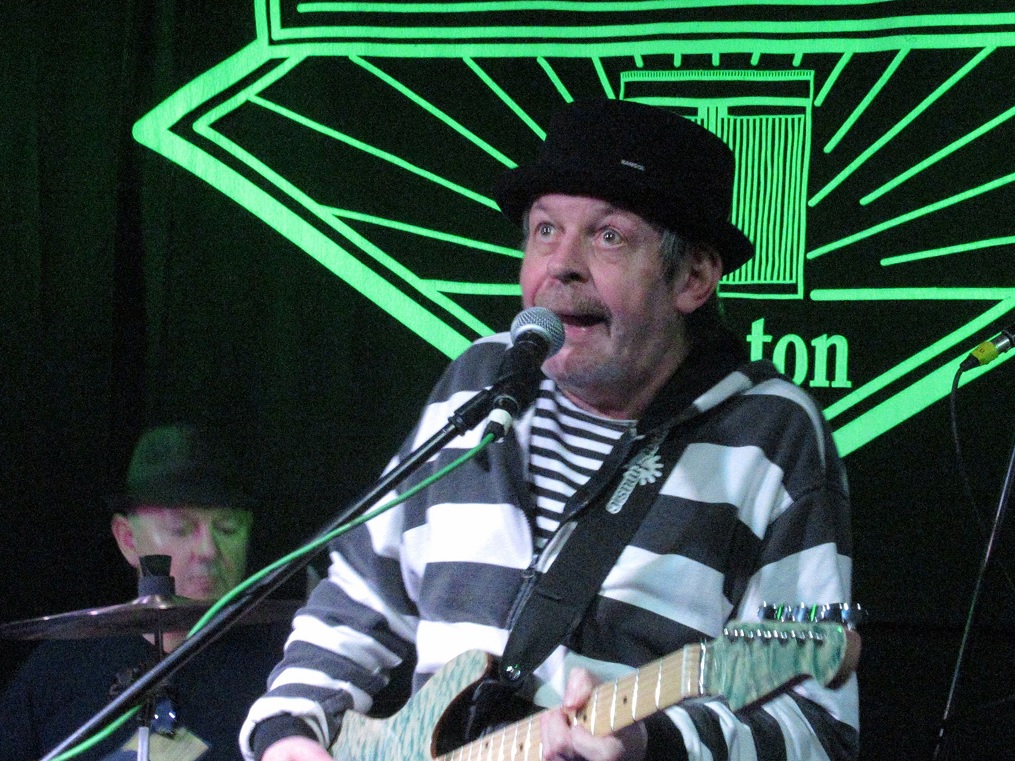 Believe it or not, it’ll be fifteen years ago this month that radio DJ John Peel passed away. If you’re lucky enough to be too young to remember, his show was a continuous fixture on BBC Radio One from the station’s inception in 1967, right up until his untimely death in 2004. Peelie was a tireless champion of new music, was hugely influential, and is greatly missed. I first tuned in as a teenager in the 1970’s. If you weren’t actually out at a gig, his 10pm till midnight slot was required listening. For pretty much every band and every track that became a classic of the new wave and post punk era (and other alternative genres since), John Peel’s show was where we heard them first.

Brighton promoters Spinningchilli have been putting on John Peel nights to celebrate the life of the great DJ, and tonight’s at The Green Door Store is the 10th such event. All three bands have featured on his show in some way. 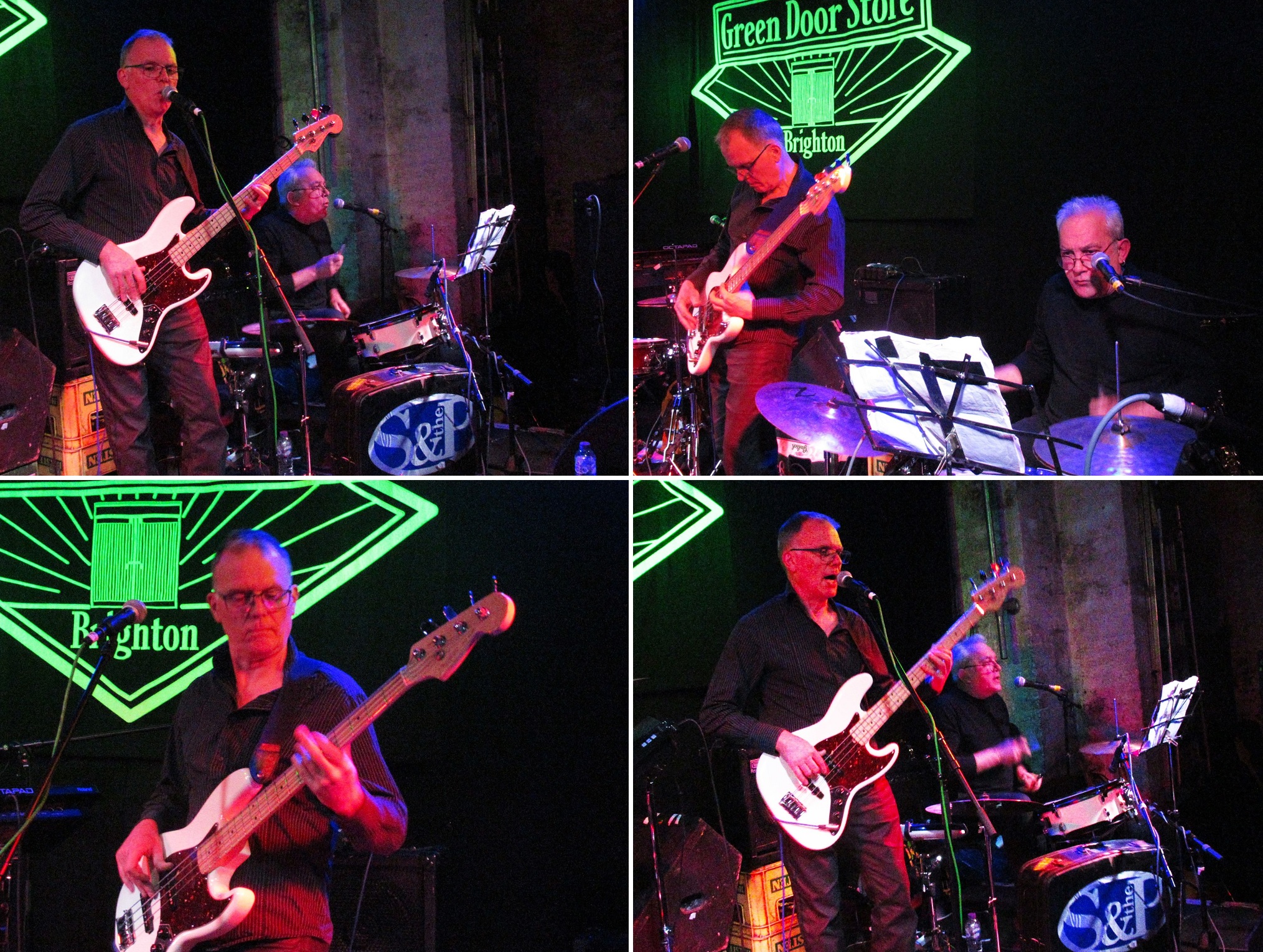 First up are Simon&thePope (no spaces), a black clad duo pumping out an intriguing concoction of post punk funk. John Pope stands, calmly wrangling a low throb and flurries of snaps and pops from a white jazz bass. Drummer Simon Charterton provides the vocals as well as the John Peel connection, having previously drummed in The Higsons, who recorded several sessions for the show. More recently I came across Simon playing in experimental trio Near Jazz Experience, and I’ve just met a gang of his old friends from university in the bar, down from London to catch tonight’s gig. He’s an impressive drummer, conjuring a rich palette of hypnotically complex rhythms from a very minimal kit, which comprises of snare and hi-hat, a single synth drum, and an old suitcase acting as the bass drum (their music is put out on The Luggage Label).

Opening number ‘Beats Workin’ is built around an insistent bass throb with funky octave notes and a repeating vocal figure. It leads into ‘Cannelloni’, which is light, twiddly and interesting, and not at all stodgy. ‘Space Bossanoodle’ unsurprisingly has a bossa nova rhythm, led by the clattering synth drum. ‘Fella’ has a funky bass line but it’s the lyrics that grab the attention, with an extensive list of increasingly funny and improbable rhymes: Nutella, acapella, patella, Stella, Paul Weller, umbrella, Uri Gellar, salmonella and so on. ‘Gallery’ has a an Indian vibe, with the synth drum sounding like a tabla. ‘Art’ is a throbbing psychedelic funk groove, punctuated by a chiming note from the rim of the synth drum. They leave us with ‘Bangin’ On’, another trippy piece with a complicated rhythm and a nice bit of slap bass. It’s been a brief set but most enjoyable. Simon&thePope’s music is available to listen to on Soundcloud, and I could easily imagine it played on a John Peel show in a different reality. 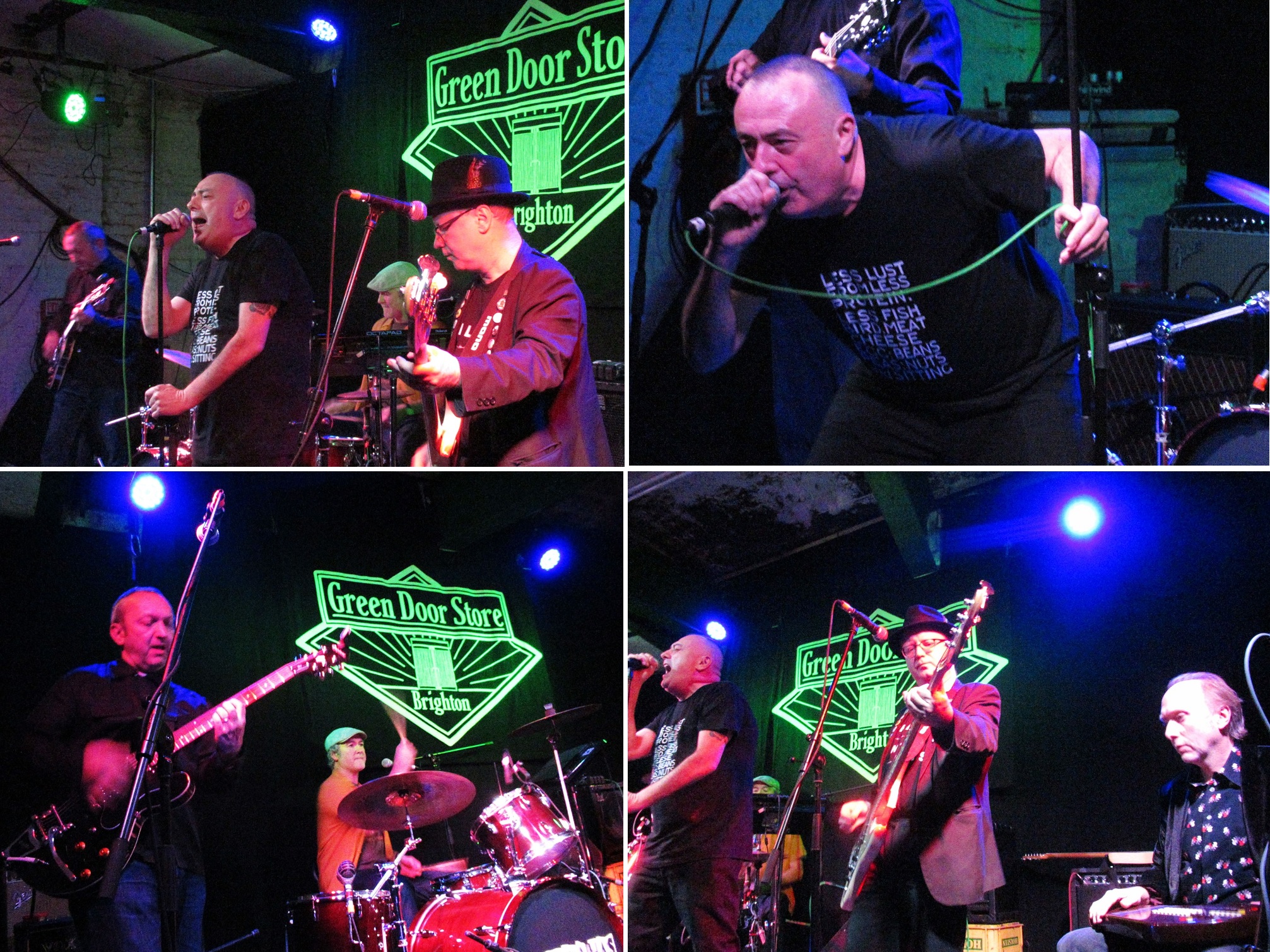 Cult Figures are next up. Formed in the West Midlands in 1977, they released two singles on the Swell Maps’ label Rather Records at the end of that decade, including the splendidly catchy ‘Zip Nolan Highway Patrolman’, which I’m pretty sure got a few plays on John Peel’s show.

The current lineup is led by Gary Jones on vocals. He sports a black T-shirt bearing a familiar motif starting ‘Less lust from less protein’. Anyone who was in London in the 1970’s might recognise this from the banner of Stanley Owen Green, who paraded it up and down Oxford Street in a solitary crusade against lust and self indulgence. I don’t think there was much take up. On stage, Gary is flanked by black clad Jon Hodgson, with a matching semi-acoustic guitar, and Lee McFadden, whose white bass contrasts with his dark suit (festooned with badges) and pork pie hat. Drummer Stuart Hilton breaks ranks with an orange shirt and flat cap, and is soon thundering around the kit with an urgent energy. House right, Barney Russel cradles an autochord, which is a kind of zither you play sitting down. He also has a white Telecaster guitar ready to go.

The band has reconvened in more recent times to make a splendid album, ‘The 166 Ploughs A Lonely Furrow’, which is a fine collection of post punk pop tunes, and worth buying for the title alone. They are promising new numbers tonight too, which should be interesting.

It’s a full, loud sound, as the set progresses, with big catchy choruses and chiming guitar. The first of the promised new songs is third in. ‘Over The Underground’ sounds great, though it’s a bit too fresh for Gary to have learned the words, and he’s forgotten his glasses so can’t read his lyric book. The perils of being a mature performer! He improvises well, and it’s all good fun. ‘Submerged Cutlery’ is a standout number from the album, and it’s a pleasure to hear its fine hooks live. ‘Lights Out’ is another cracking piece, with a soaring post punk vibe and big chanted backing vocals. I’m not sure when ‘Silver Blades’ was written, but its lyric of ‘casual violence on a Friday night’ certainly seems current and topical, as does ‘Privilege’, with its central figure of ‘I’ve got a sense of entitlement’.

Will they play ‘Zip Nolan’? Of course they will, and I’m joyously transported back to 1979, listening to Peelie on my bedroom radio. Excellent! 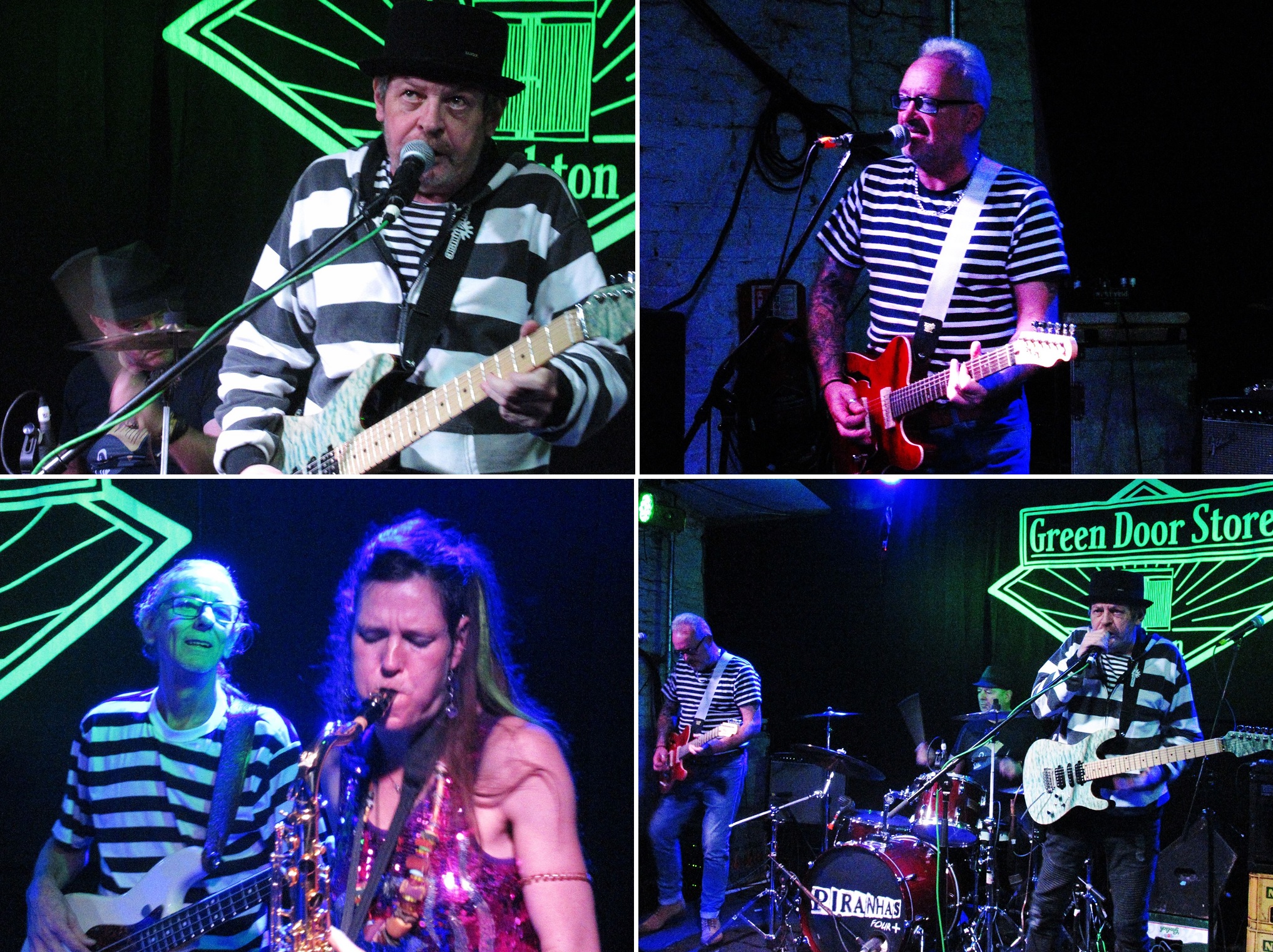 If you’ve ever given even a cursory glance at the Brighton gig listings over the past four decades, you’ll have probably come across The Piranhas. Even if not you’ll have heard their biggest hit: a raucous sax-led cover of ‘Tom Hark’. Back in the day they recorded no less than four sessions for Peelie, who made the trip down to Brighton to catch them live at The Alhambra. These days they’re known as Piranhas Four, and they’re a five piece. Frontman Bob Grover shares vocal and guitar duties with Gary Browne. Stu Wagstaff is on bass, Ken Brotherstone on drums, and the lineup is completed by Bon Bessom on saxophone.

The visual theme as they take the stage tonight is hoops: Bob, Gary and Stu all have hooped tops and Bon is wearing hooped tights with her purple sparkly top. They are just about to start when Bob decides he ought to tune his guitar. His electronic tuner doesn’t seem to be working, which prompts an anecdote about the first time they came across one of these magical devices, and a lot of tuning the old fashioned way: out loud and by ear.

With the technical stuff sorted, they launch into a stream of perfect ska pop tunes with insanely catchy hooks: ‘Jilly’ and ‘Boyfriend’ are absolute bliss. ‘Coloured Music’ is a good example of how, if you keep playing a song for long enough, the lyrics will become relevant again. Today’s obsession with coloured vinyl LP’s is just as strong as it was in 1979. ‘Zambesi’, another Top Of The Pops hit from back in the day, is silly bouncy fun.

I remember Peelie playing ‘I Don’t Want My Body’ on his show, and the self-loathing of the lyrics takes on a new slant as Bob sings them forty years older. There’s plenty of dancing as the set moves on, and everyone seems to be having fun. ‘Getting Beaten Up’ is probably my favourite Piranhas song, and I never tire of hearing it live. ‘Getting beaten up…is part of growing up.’ It’s followed by ‘Tom Hark’, originally a South African kwela song, given a different twist by Bob Grover’s lyrical additions. Championed, of course, by John Peel, this single made it to the dizzy heights of Number 6 in the UK charts in August 1980. It was fun then, and it sure is good fun now.

It’s been a brilliant night at The Green Door Store, and good to remember John Peel and the amazing musical legacy of all the acts he gave precious airtime and exposure to. Some of tonight’s numbers transported me straight back to those late night sessions, all those decades ago, tuned in on a crackling transistor radio. 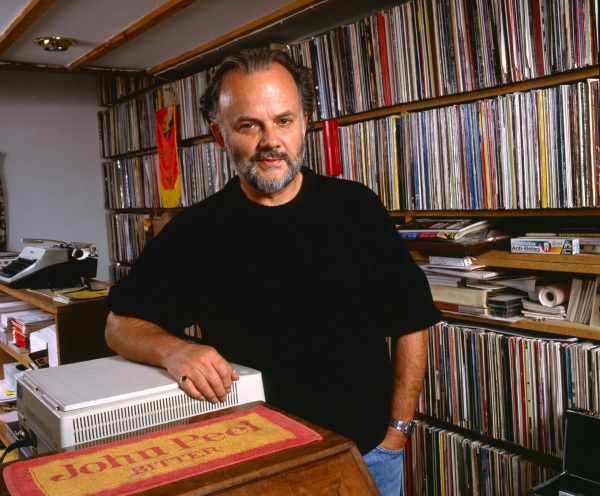